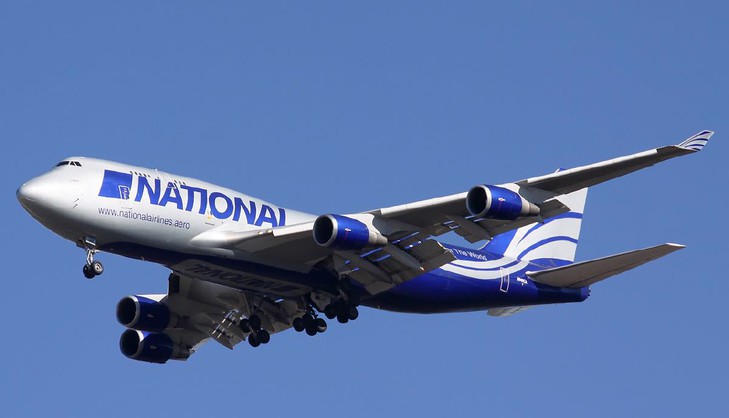 A National Airlines (NAL) Boeing 747 freighter crashed on take-off from Bagram Airbase, Afghanistan, in April 2013 because the five large military vehicles on board were “inadequately restrained”, said the US National Transportation Safety Board (NTSB).
This led to at least one vehicle moving rearward, crippling key hydraulic systems and damaging the horizontal stabilizer components, which rendered the airplane "uncontrollable", commented the NTSB, which was also critical of the US Federal Aviation Administration (FAA).
All seven crew members were killed in the April 29, 2013 crash while the aircraft was transporting a load that included several 18-ton army vehicles on pallets.
Contributing to the accident – said the NTSB in its report – was the FAA’s “inadequate oversight” of NAL’s handling of special cargo loads, “such as that being carried on the accident flight”.
The 747-400 freighter was carrying five mine-resistant ambush-protected (MRAP) vehicles. There was no evidence found to suggest that the airplane was brought down by an explosive device or hostile acts, said the independent federal investigation agency.
“The crew took on an important mission to support American forces abroad and lost their lives not to enemy fire, but to an accident,’’ said NTSB chairman Christopher A. Hart, adding: “We cannot change what happened, but in fully investigating this accident, we hope to find ways to prevent such an accident from happening again.”
The investigation found that NAL cargo operations manual “not only omitted critical information from Boeing and from the cargo handling system manufacturer about properly securing cargo, but it also contained incorrect restraining methods for special cargo loads,” said the NTSB.
The board recommended that the FAA create a certification process for personnel responsible for the loading, restraint, and documentation of special cargo loads on transport-category airplanes. Other recommendations call on the FAA to improve its ability to inspect cargo aircraft operations, specifically those involving special cargo loads.
“Today’s recommendations to the FAA, if acted upon, will bring these important issues into sharper focus, help to standardise previously ambiguous areas of oversight and guidance, and prepare FAA inspectors to determine whether this clearer guidance is being followed,” Hart said.
NAL has been approached for comment.
To view the findings, the probable cause, and all recommendations, click on the following link…