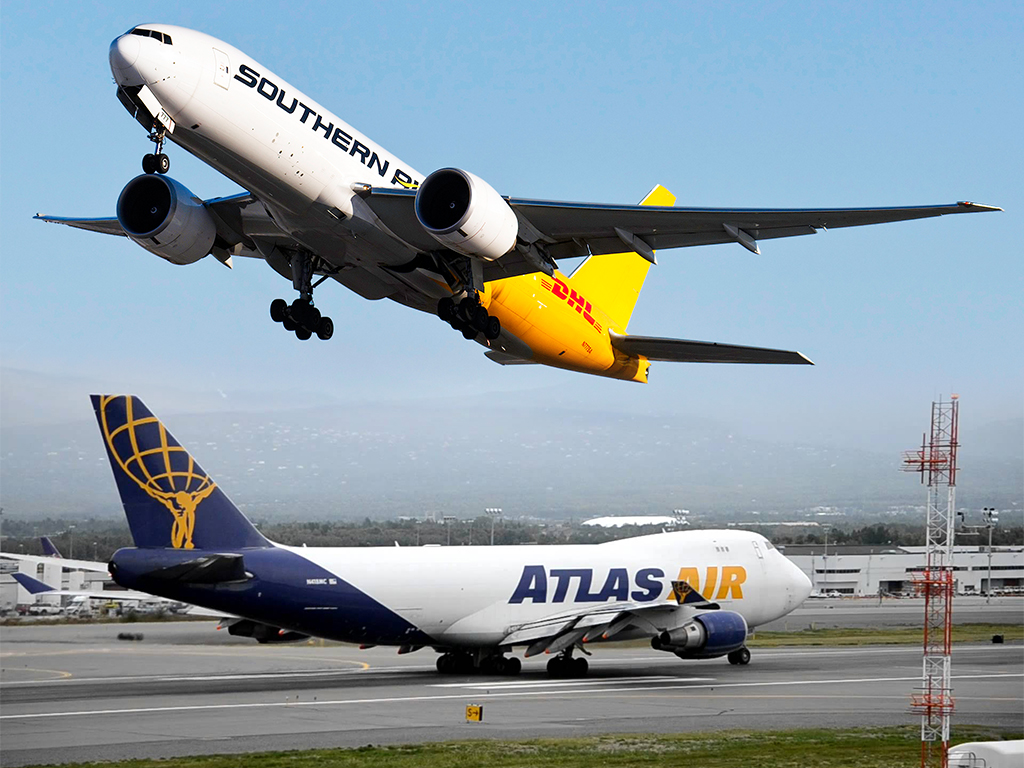 Atlas Air Worldwide Holdings has entered into a “definitive agreement” to acquire privately held  Southern Air Holdings for $110m, a deal that brings together two US-based ACMI service providers with a combined fleet of more than 75 aircraft.
The transaction, with Atlas Air using “available cash on hand” to complete the purchase, is subject to customary closing conditions and approval by the US Department of Transportation, and is expected to close in the next few months.
Southern Air is the parent company of Worldwide Air Logistics Group and its two operating subsidiaries, Southern Air and Florida West International Airways.
The combination with Southern Air is anticipated to add approximately $100m to Atlas Air Worldwide’s annual revenues, which reached $1.8bn in 2014.
“We are very pleased to announce a strategically compelling, highly complementary and immediately accretive acquisition of Southern Air,” said Bill Flynn, president and chief executive of Atlas Air Worldwide, adding: “And we are eager to capitalise on the substantial opportunities that the transaction will provide, especially 777 and 737 aircraft operations.
“The result will be a more diversified and profitable company offering access to the widest range of modern, efficient aircraft, together with a broader mix of services and a greater scale and global footprint that will drive significant value for our customers and shareholders.”
Daniel McHugh, chief executive of Southern Air Holdings, said: “We very much looking forward to joining the Atlas Air family of companies. We share the same commitment to providing superior customer service via our exceptional team of aviation professionals. And Southern Air will now have a strong and viable parent to enable us to continue to grow.”
In a statement, Atlas said that the transaction provides it with “immediate entry” into the B777 and B737 aircraft operating platforms, with "potential for developing additional business with existing and new customers of both companies.”
Southern Air’s main operating company currently flies five B777-200Fs and five B737-400Fs under flight services (CMI, or Crew, Maintenance and Insurance) agreements with DHL Express.
“The platforms provided by these aircraft will augment Atlas Air Worldwide’s ability to offer customers the broadest array of aircraft and operating services for domestic, regional and international applications,” said Atlas.
The deal combines “complementary businesses” said Atlas, which will “aid in providing seamless operations for customers”.
It added: “Further, the transaction will enhance Atlas Air Worldwide’s position as a leading global provider of outsourced aircraft and aviation operating services.”
The transaction is also expected to be “immediately accretive” to Atlas Air Worldwide’s adjusted earnings per share in 2016 with EBITDA and adjusted net income margins in line with Atlas Air Worldwide’s.
The impact of the transaction will be included in Atlas Air Worldwide’s 2016 earnings framework, to be discussed during the company’s next earnings release on February 18, 2016.
Atlas Air Worldwide is the parent company of Atlas Air  and Titan Aviation Holdings, and is the majority shareholder of Polar Air Cargo Worldwide. Through Atlas and Polar, Atlas Air Worldwide operates the world’s largest fleet of Boeing 747 freighter aircraft.
Southern Air Holdings was advised by Milbank, Tweed, Hadley & McCloy. New York-based corporate partner Roland Hlawaty led the Milbank team on the deal with associates Andrew Everett, Daniel Valenza and Lorin Kolcun.
The Milbank Tax team was led by Russell Kestenbaum and special counsel Max Goodman and the Executive Compensation team was led by partner Joel Krasnow and associate James Beebe.

Menzies Aviation has announced a series of wins at Los Angeles International Airport (LAX), its largest station in the Americas,…