UPS: direct and daily to Dubai with freighter operation 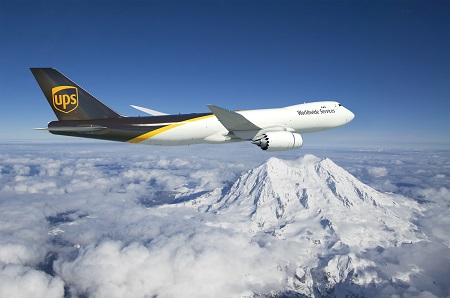 Having taken delivery of three new Boeing 747-8 freighter aircraft in 2017, UPS is deploying one of them on a daily non-stop flight from its Worldport hub in Louisville, Kentucky to Dubai.
The service is currently flown on a weekly basis and will begin operating Tuesday through Saturday from February 27.
Jim Barber, president of UPS International, said: “The UAE trades with all 50 US states and has grown to become the US’s largest export destination in the Middle East.”
With Dubai’s importance as a global trade hub increasing, he pointed out that the new flights reduce transit times from North and South America to destinations in the Middle East by one business day.
Dubai also acts as a gateway to Africa and the Indian subcontinent.
UPS Airlines president Brendan Canavan noted a rise in demand for capacity, saying: “Our customers are demanding more capacity, and we’re providing it with this non-stop connection to Dubai. UPS has made a strategic investment in 747-8 jumbo jets, the largest aircraft we have ever flown, to offer sustainable lift on long-range international routes like this.”
From Dubai, the B747-8F flies on to Shenzhen (where UPS has its largest Asia facility) and then back to Louisville via Anchorage, completing an “around-the-world” routeing. This, in turn, frees up capacity on UPS flights from Cologne to Dubai and beyond.
UPS is expanding its foothold in Dubai as part of the development of its smart global logistics network in the run-up to Expo 2020 Dubai, for which the company has been appointed official logistics provider.
At approximately 12,400 km, the route is the longest regularly-scheduled flight UPS has ever operated, and is made possible by the new 747-8s, which offer greater payload over long rang, the express firm said.
Last week, the company ordered an additional 14 Boeing B747-8F cargo jets and four new Boeing 767F aircraft to provide additional capacity in response to demand growth.
All of the new aircraft will be added to the existing fleet and no existing aircraft are being replaced.
The aircraft will be delivered on an expedited schedule, building on the company’s 2016 order of 14 Boeing 747-8 freighters.
Read more express logistics news