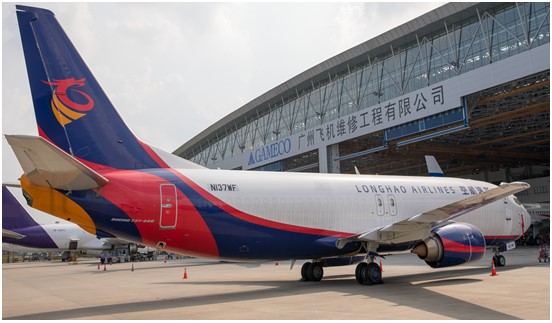 Vallair, the Luxembourg-headquartered aircraft trading, leasing and specialist MRO organisation, has completed delivery of a Boeing 737-400F to Guangdong Longhao Aviation Group, its first for the Chinese operator.
The 737-400 aircraft (MSN27916) was previously operated by Japan Transocean Airlines and was converted at Gameco in Guangzhou under a PEMCO supplemental type certificate (STC).
The aircraft is one of a number of B737 aircraft that Vallair has purchased for cargo conversion, but the first Vallair B737-400 to be converted at Gameco’s facility.
Norbert Marx, chief executive of Gameco, observed: “Since entering our co-operation with PEMCO, Vallair is our first customer for cargo conversion under the PEMCO STC in Guangzhou.
“Our technical team has worked closely with Vallair’s cargo conversion specialists to ensure that Longhao has the optimum aircraft for their needs.
“Our chosen provider partnership with Vallair in the Asia region establishes a strong commitment to timely completions of the highest standard.”
Peter Koster, head of cargo conversions at Vallair, informed: “Vallair takes a long-term view with regards to its Chinese portfolio, we are carefully building a fleet of Boeing and Airbus commercial aircraft that will form the bedrock of our cargo conversion programme.
“As these mature aircraft come to the end of their operational lease agreements we are extending the life of these assets in the most economically beneficial way through our cost-effective conversion programme.”
PEMCO World Air Services, which designed the STC for the B737-400 conversion, has extended its footprint in China by adding Guangzhou to its map of conversion sites. The company’s Mike Andrews commented: “The assignment of freighter conversions to our new partner Gameco has proven to be a valid choice.
“Quality and efficiency are key drivers for conversion programme[s] and Gameco delivered excellence for Vallair via their highly skilled workforce,” he added.
Guangzhou Airport-based Guangdong Longhao Aviation Group operates a number of B737-300Fs that are either owned or leased.
It currently offers freight services on a range of domestic and international routes, the latter taking in Hong Kong, Macau and Taiwan.
Longhao Airlines received approval from China’s Civil Aviation Administration in 2016, undertaking its inaugural commercial flight nine months later.
Operations were initially launched in March 2017 with a Guangzhou to Nantong service. Since then, nine cargo routes have been opened up and three Boeing 737 freighters were introduced to the fleet over just the first half of this year.
PEMCO redelivered its first Boeing 737-300 passenger-to-freighter converted aircraft to Longhao at the end of 2016.
At the time, Andrews enthused: “We look forward to assisting Longhao’s rapid expansion into the air cargo business.
“This first aircraft is the start of many great endeavors for Longhao and its customers.”
In July 201, Longhao had confirmed that it had signed up for the conversion of three 737-300 aircraft from PEMCO. The latter said that the conversions would be carried out by Jinan Shandong-based STAECO, one of PEMCO’s three conversion partners throughout the world.
Read more freighter conversion news
Click here for a free digital subscription