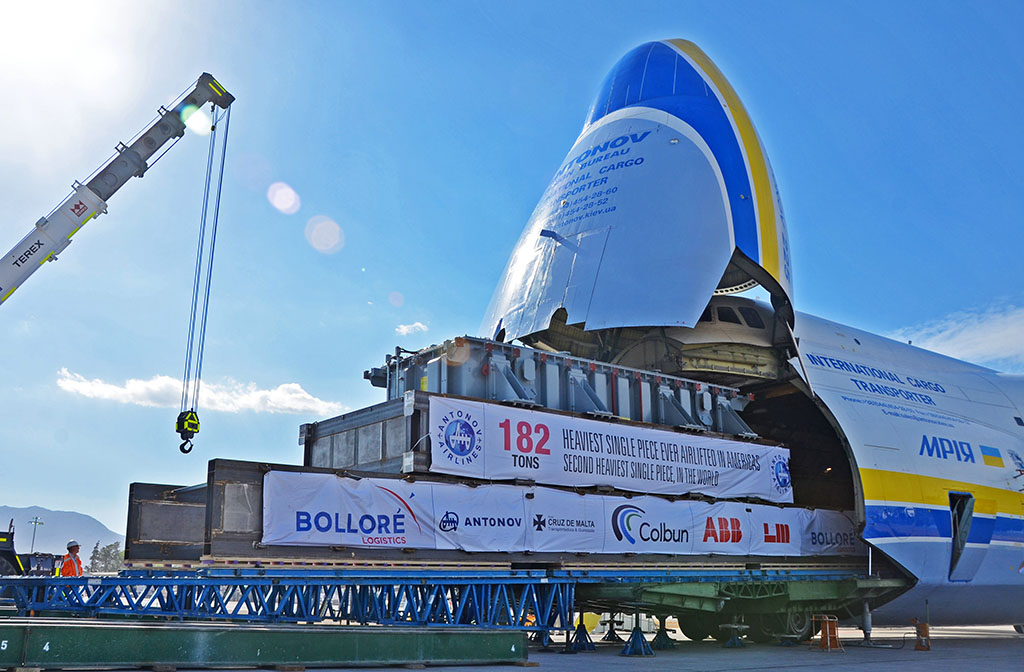 A complex trio of freighter charters co-ordinated by Bolloré Logistics Chile utilised an An-225, a Boeing 747 and a MD-11 to transport a 155-ton transformer and additional parts to Santiago in Chile.
The November 2016 charter saw the transformer begin its journey with a seven km road transport from an ABB facility in Brazil to São Paulo Guarulhos airport, on behalf of Colbún, a Chilean power generation company, in preparation for its An-225 flight to Santiago.
The concentrated weight of the transformer required a weight distribution frame for its flight from Guarulhos, adding an extra 27 tons to the original piece.
The weight distribution frame, consisting of parts up to 16.20 m long, first needed to be transported from Luxembourg on a chartered B747 nose-loading freighter to Viracopos where it would then be transported to Guarulhos by the An-225.
At Viracopos the frame was customs cleared and re-assembled in a little over seven hours.
The assembled frame was placed on board the An-225 and flown just 110 km on a 30 minute flight to Guarulhos. The transformer was then mounted onto the frame, just a few meters away from the giant aircraft, the world’s largest freighter.
After 15-hours of overnight work, the complete unit – with a total weight of 182 tons – was loaded onto the An-225, which then departed to Santiago, where the entire consignment was unloaded in just over three hours.
Nelson Figueroa, director of the industrial projects division at Bolloré Logistics Chile, said: “This shipment was the heaviest single piece ever airlifted in the Americas, and the second heaviest in the history of aviation.
“This was an extremely complex and challenging operation which required over four months of thorough preparation.”
In a separate charter but one more component in the complex heavylift project, an MD-11 was chartered from Guarulhos to Santiago International Airport, in order to transport the 42 tons of accessories measuring 5 m long and 2.20 m high.