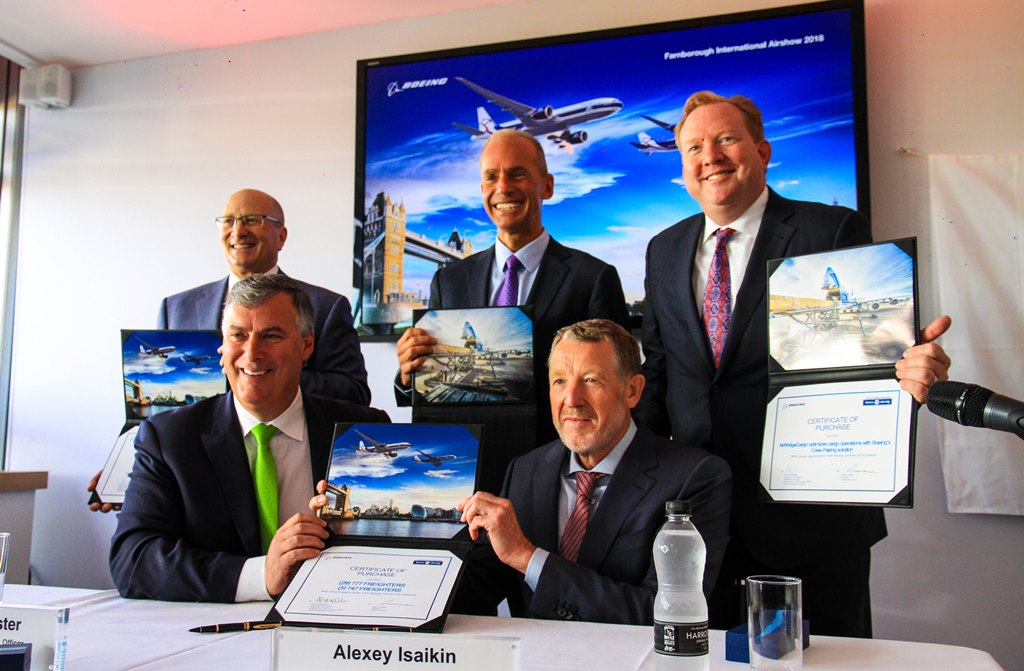 Volga-Dnepr Group and CargoLogicHolding have today signed letters of intent to acquire 29 Boeing 777 freighters, and ordered five B747-8Fs.
The deals were announced at the 2018 Farnborough International Airshow and based on current list prices are valued at $11.8bn.
The deal also includes the purchase of a crew pairing solution, and an agreement to work together on future freighter projects.
"This is a very significant day in our company’s history. With this package of agreements, we will grow our business with the unique and unmatched 747-8 Freighter and open new market opportunities with the 777 Freighter, the world’s longest range twin-engine cargo jet," said Alexey Isaykin, president of Volga-Dnepr Group and Chairman of CargoLogicHolding.
"And we will work with Boeing to develop new freighter solutions that will help us continue to serve the unique and fast-changing requirements of our global customers."
Volga-Dnepr Group is among the world’s largest B747F operators.
The Group, and its subsidiaries and strategic partners have leveraged the jet’s unique cargo-loading and cargo-carrying capabilities to build an unmatched global network for transporting unique, oversize and heavy cargo.
Volga-Dnepr said it wanted to add more B747-8 Freighters to its fleet and affirmed a commitment to purchasing five more of the jets valued at $2bn in current list prices.
"We are true believers in the 747-8 Freighter, it is a very special airplane. We fly it every day and we understand why operators around the world want more of them," said Isaykin.
While the Group and its partners have largely built its business on very large four-engine freighters, it now plans to expand its future fleet options with a commitment for the twin-engine 777 Freighter.
CargoLogicHolding intends to order 29 Boeing 777 Freighters, valued at $9.8bn according to list prices.
The airplane’s range and significant cargo capacity promises to open up significant network and growth opportunities.
"CargoLogicAir, part of CargoLogicHolding, started its business by flying 747 scheduled and charter flights to and from the UK. We are excited to extend the network using a range of Boeing family aircraft including Boeing 747-8F, 777F, 767F and 737-800BCF," added Isaykin.
The package of agreements also includes a commitment for both companies to explore other freighter solutions, such as new production 767 Freighters or converted cargo jets such as the 737-800 Boeing Converted Freighter.
With the resurgence in the airfreight market – demand grew nearly 10% last year – Boeing has seen a big spike in interest for cargo jets.
Boeing has now captured more than 100 orders and commitments for production and converted freighters this year.
Saj Ahmad, chief analyst at StrategicAero Research said the deal offered Volga-Dnepr the balance between capacity that can handle outsize cargo and the cost benefits of the B777F.

"The 747-8F deal with Volga Dnepr/CargoLogicHolding underscores not only the long term rigid belief by Boeing that the air freight market rebound is well underway, it also demonstrates that cargo operators are happy to invest in new technology airplanes like the 747-8F to meet the demand of their customers," he said.
"With almost 98% of the cargo market served through Boeing freighters, anyone wanting heavy lift payload capability really only has a choice between 747-8F and 777F – and it’s no surprise that Volga Dnepr opted to select both models.
"Volga Dnepr has become synonymous with using the 747 freighter fleet across its expansive network and yet the 777F will enable them to fly even farther to new destinations while carrying slightly less in payload. In terms of costs, the 777F provides the lowest trip costs of any widebody freighter while the 747-8F allows for greater outsized shipment movements.
"Boeing will no doubt have offered favourable terms to Volga, in particular to shore up the shrinking 747 backlog – but at the same time, Volga couldn’t go elsewhere because no one offers anything remotely close to either 747-8F or 777F.
"Volga’s huge purchase underscores its international credentials and no doubt the size of the orders and commitments will make other cargo operators sit up and take note.
"While this may not portend cargo operator consolidation, it will increase competition, particularly since DHL too has signed up for a big fleet of 777 Freighters to expand its business too."
As part of the agreements, Boeing Global Services will provide AirBridgeCargo – a Volga-Dnepr Group airline – with a Crew Pairing solution to support the planning and operation of the airline’s 300 crew members. The program creates optimized work duties, improving crew efficiency and improving airline productivity.
"This service puts the most advanced data analytics capabilities at Volga-Dnepr’s hands as they operate the most advanced freighters in the world. It’s a prime example of how Boeing integrates services solutions with the platform to help customers work better, work faster and save on operating costs," said Ihssane Mounir, senior vice president of Commercial Sales & Marketing for The Boeing Company.
It is Boeing’s second major freighter deal of the airshow, after it yesterday announced DHL would purchase 14 B777Fs.
The orders continue a boom for the B777F in 2018, with FedEx ordering 12 B777Fs in June, Qatar Airways signing a letter of intent for five aircraft, an order worth $1.7bn at list prices, while Lufthansa Cargo has ordered two more of the 103 tonne capacity long-range jet.
Turkish Airlines kicked off the year with a confirmed order for three B777Fs, to be delivered this year, on top of the two it already operates, while Japan’s All Nippon Airways (ANA) is acquiring two B777 freighters — for delivery in 2019 — in response to the “expanding market in Asia, China, and North America”.
Read more freighter operator news
Sign up to receive Air Cargo News direct to your inbox for free