Voyageur Aviation Corp has completed the world’s first Bombardier Dash 8-100 package freighter (PF) conversion.
The first-of-its-kind Dash 8-100 PF conversion was carried out on behalf of Canada-based Wasaya Airways. In total, the airline will take delivery of two of the aircraft.
The conversion firm said the aircraft offered “excellent operating costs”, short take-off and landing capabilities, and a range of up to 800 nautical miles fully laden.
“This gives the aircraft strong versatility in a number of regional route structures, and ideally positions the aircraft to serve feeder networks for small package and express freight,” Voyager said.
Voyageur Aviation Corp president Scott Tapson said: “We are delighted to have Wasaya as the launch customer for the Dash 8-100 PF.
“We believe Wasaya’s deployment of the aircraft in supporting communities in northern Canada highlights the key advantages of the aircraft including payload, range, operational efficiency, and unpaved runway performance.
“We could not hope for a better launch partner and we are confident that the Dash 8-100 PF will efficiently serve Wasaya’s valued customers for many years to come."
The Dash 8-100 PF is designed to carry a typical payload of around 4.5 tonnes and has a volume of 39 cu m.
“This gives the aircraft the largest payload in the class of medium regional turbo-props that have been subject to cargo conversion programmes,” Voyager said.
“The aircraft’s aft cargo door measures 1.27 m by 1.52 m and the low door sill height of 1 m, make for ease of loading without specialised equipment.
“The aircraft is also equipped with reinforced cargo floor and advanced LED interior lighting system.” 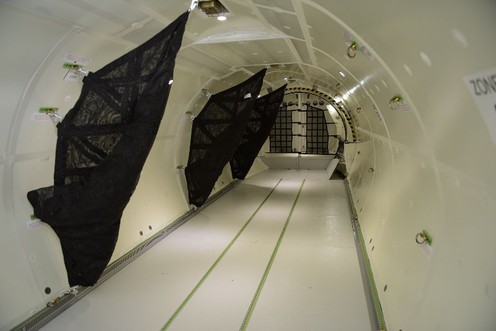