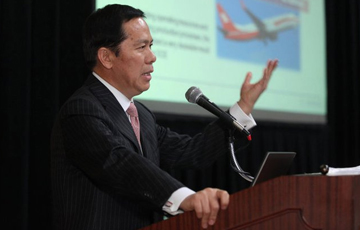 Airlines may be transporting goods worth $6.4trn each year, but the air cargo industry is in “desperate need” of modernisation if it is to capitalise on the international e-commerce opportunity, according to Liu Shaoyong, president of China Eastern.
In a welcome address representing the host airline for the IATA World Cargo Symposium (WCS) in Shanghai, Liu said the industry must update its IT systems in order to fully integrate with the supply chain and to exploit the benefits of economic recovery, writes Martin Roebuck.
Shanghai projects itself as a city that is open business, and Pudong Airport, sitting at number three in the world cargo league table, is certainly playing its part.
It handled $300bn of cargo last year, the freighter aircraft that call there serve 98 locations, and FedEx is set to follow UPS’ lead by making Shanghai its main regional hub from 2017.
However, foreign delegates at WCS, including the world’s media, viewed the call for better connectivity with some irony. Internet access was severely constrained at the conference hotel, while those relying on standard international search engines and email providers were disappointed to find that China still blacklists Google.
Liu’s wider point about the importance of innovation was nevertheless well made. He said that the cargo industry had experienced very different fortunes to the passenger sector since the recession, with revenues down five per cent since 2010.
He identified increasing trade protectionism as a major threat to global trade, and claimed that regulatory requirements and inefficient processes were slowing the flow of air cargo to such an extent that alternative modes of transport were sometimes a faster option.
Julie Perovic, senior economist at IATA, confirmed that modal shift was one of several “structural issues” confronting the industry. The 19.5m tonnes of airfreight uplifted in 2013 would have been more than five million tonnes higher without migration to sea, road and rail, though airlines appeared to have stabilised after steadily losing their share of international trade.
“More pertinent now is the weakness in world trade growth,” Perovic said. In times of recovery, international trade used to expand at twice the rate of domestic industrial production, but now simply followed the same curve.
This had still enabled the air freight to reach the highest level on record at 16.5bn freight tonne kilometres in 2014, growing by 4.5 per cent to push past its previous peak achieved in 2010.
Performance has been notably different by region, with Middle Eastern registered airlines increasing volumes by 60 per cent while those based in the Asia Pacific are still eight per cent behind 2010. “Europe saw some pickup in 2014 but the weakness of the Eurozone economy has taken momentum out of carriers,” Perovic said.
While capacity utilisation was up, average yield globally was 15 per cent lower than at their recent peak in mid-2011, falling to $2.10 per kilo last year. And with rates not yet fully reflecting the fall in the crude oil price, she suggested further retrenchment was likely.
When IATA carried out its latest quarterly survey in January, 80 per cent of member carriers’ heads of cargo expected volume growth this year, but only 40 per cent were confident of yield improvement.
Marco Bloemen, senior VP of Seabury Group, confirmed that a seven per cent decline in gross yield in the fourth quarter of 2014 did not fully represent the fall in the oil price.
However, the analyst has calculated that a 747-400 freighter operating three round trips per week between Europe and Asia, benefiting from a 30 per cent saving on fuel costs and experiencing a five per cent fall in yield, would still show a 7.7 per cent better return.
Sixteen 747-400Fs are currently parked. Bloemen said these mathematics could encourage some back into service, but even if they all did so, this would only increase cargo capacity by one per cent this year, only a quarter of the impact new deliveries and conversions will have.