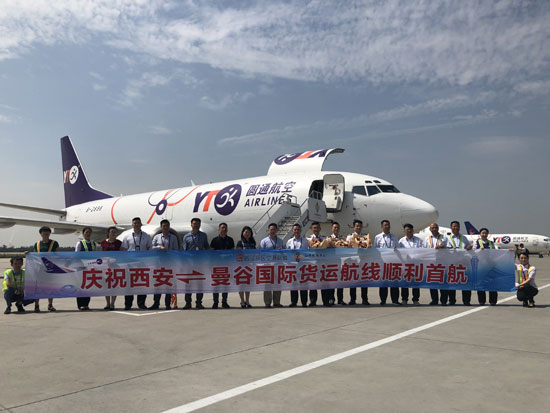 Chinese express carrier YTO Airlines has continued the expansion of its international freighter operations with a new flight to Bangkok.

The airline this week started a three-times-per-week Boeing 737-300F service between Xi’an and Bangkok.

The maiden flight was loaded with 14 tonnes of fruit, including mangosteens. The service will target other fresh produce, including seafood, pineapples, lotus and durian,  with an estimated import volume of 1,500 tonnes per year.

On the outbound leg, the freighters are expected to carry e-commerce and general freight.

YTO said the service would act as a bridge between China’s northwest inland regions and Thailand and shorten transport times.

“At present, most of the imported fruits sold in the northwestern region of China are transported through east China, south China and other places,” the express firm said.

“The transit links are numerous and the transportation time is relatively long, which is easy to cause product loss, and the fruit colour is also reduced.”

It said that the transport time is about four hours and that fruit picked up in Thailand in the morning can be on consumer’s plates in China by the evening.

In addition, the route will also be connected with the Chengdu-Xi’an, Xi’an-Yinchuan and Xi’an-Hangzhou freighter routes to “form a distribution network to open the southwest, northwest and east China regions to Southeast Asia”.

In July last year, the airline confirmed that the company would develop an huge aviation logistics hub in Jiaxing in the Yangtze River Delta area.

It also has 10 B737-800BCF aircraft on order, with options for 10 more.  Meanwhile, Cargo Facts recently reported the airline would next month start a service to Kuala Lumpur on behalf of Cainiao.