YTO takes delivery of its first B757 freighter from Precision 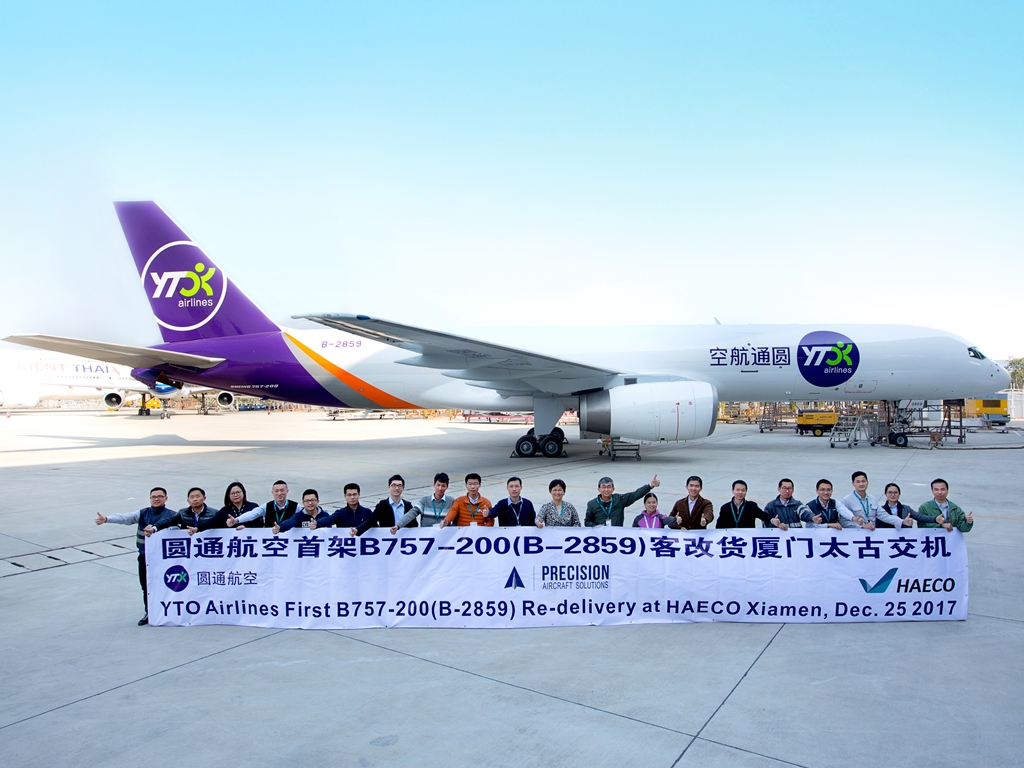 Precision Aircraft Solutions has confirmed the delivery of three Boeing 757-200 converted freighters, with one being delivered to new customer, Chinese express firm YTO.
As well as the YTO conversion, the two other aircraft were re-delivered to SF Airlines, as reported in Air Cargo News.
“Strong demand continues for our B757 conversion product as we respond to a surge in e-ommerce driving a continued demand for cargo lift, worldwide,” said Precision president Gary Warner.
“We also want to welcome YTO to our growing list of customers as we steadily move toward our 100th B757 conversion, which is just around the corner and a testimony to our conversion quality, product reliability and support.”
YTO, which launched in September 2015 and is hubbed in Hangzhou, is looking to expand its fleet of aircraft. The aircraft represents its first B757.
Its current fleet is made up of eight B737s – three re-delivered by Pemco late last year.
As well as its deal with Precision, the airline is one of the launch customers for Boeing Commercial Airplanes’ 737-800 Boeing Converted Freighter programme, with a firm order for 10 aircraft and options for 10 more. It also has a further two B757s in the process of being converted.
The aircraft will replace an existing B737 on Wuxi-Guangzhou route, almost doubling carrying capacity on the route and therefore reducing costs.
It is understood the airline is looking to expand internationally this year with Japan and South Korea possible new destinations, as well as Macao and Hong Kong.
Past reports suggest the airline is hoping to build a fleet of 50 aircraft by 2020 to meet growing demand in China’s express market.
The delivery of SF Airlines’ latest aircraft means its fleet now totals 41 freighters and it has recently purchased B747F aircraft through an online auction.
Precision said conversion of the B757-200 aircraft MSN 29423 was performed at Flightstar in Jacksonville, FL. MSN 29217 was performed at HAECO Xiamen in China and MSN 27260 was performed in AMECO Chengdu base.