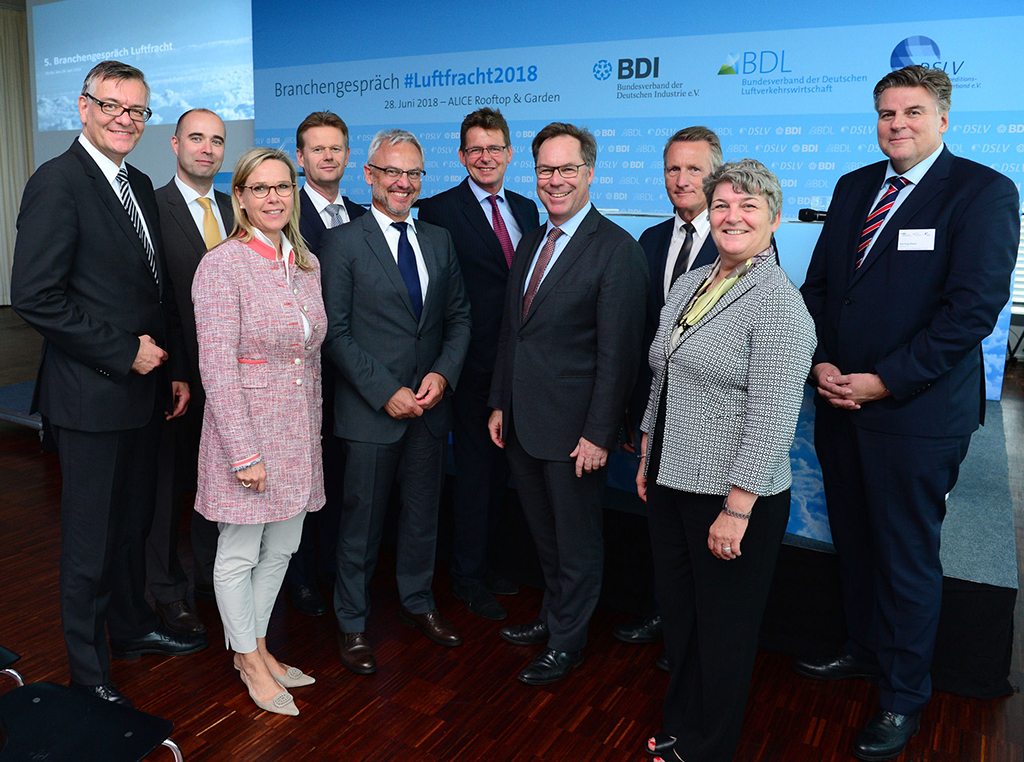 Germany’s airfreight industry has called for closer cooperation and teamwork with regulators to increase digitalisation in the European country’s air cargo logistics.
Matthias von Randow, managing director of the Federal Association of German Air Traffic Industry (BDL), told a symposium in Berlin that a “significant increase in demand” meant that airfreight’s logistics supply chain is facing capacity constraints in infrastructure and administrative procedures.
“If we want to successfully cope with growing demand in air traffic we have to make massive efforts in all areas,” said von Randow, addressing an audience that included representatives from the Federation of German Industries (BDI), the German Forwarding and Logistics Association (DSLV) and the Board of Airline Representatives in Germany (BARIG).
Von Randow added: “Especially the interfaces with authority functions such as customs administration and air security controls can and must be organized much more efficiently.”
BARIG secretary general Michael Hoppe said that his airline members had identifed an urgent need for action in a number of areas:
•        Capacity expansions in airspace
•        Need-oriented development of important airport infrastructure
•        Optimization of air and ground services
•        Significant improvements of security controls
•        Digitalization of processes of the logistics chain
Digitalisation was the main focus of the industry symposium, which also featured representatives from the Federal Ministry of Finance and the Federal Ministry of Transportation.
A BARIG statement issued after the meeting said: “Since especially the cross-border online business is rapidly growing, the corresponding air cargo volume is also experiencing steady increases.
“To handle the additional volume, integrated digital processes along the entire logistics chain are inevitable.
“Today’s reality and the current legal framework however are trailing far behind these requirements.”
BDL presented an analysis of the current situation, which stated that paper documents continue to play an “immense role” in air cargo and are “massively slowing down” the related processes, with consignment notes, customs declarations and insurance documents a major part of the problem.
Efficient solutions such as electronic consignment notes from IATA “are not implemented comprehensively at the moment,” the industry and regulators heard.
BARIG and the participating industry associations demanded that politicians “create the framework for electronic handling of relevant documents and information” while the air cargo sector in Germany plans to “further enhance the good basis of cooperation with the customs authorities”.
BARIG’s Hoppe explained: “The extremely competitive situation regarding the development of logistics’ global future is endangering Germany’s leading position in this area. A mutual campaign on the other hand could strengthen the location Germany. This requires a joint spirit.
“All parties involved must act as a team and organise the necessary projects mutually and in a targeted manner. Other countries have identified by now that airfreight and logistics are motors of their national economies.
“The majority of goods comes from overseas and Asia and thus demands a reliable anchor point in Europe.”
Hoppe made the points that Frankfurt airport is currently Europe’s largest cargo hub [by volumes] while Leipzig has established itself as a integrator gateway for the Germany’s DHL and Aerologic, while Cologne is the overnight freighter hub for Federal Express and UPS.
He added: “European airports such as Luxemburg, Brussels, Liège and others are competing for the best positions in the attempt to master the novel streams of goods driven by growing e-commerce.
“The current challenge is to bring all system partners in Germany together and mutually develop new processes as well as interfaces and electronic procedures. If this is the case, Germany will have a good chance of further expanding their leading role in Frankfurt, Leipzig and Cologne.”
He said that BARIG and its over 30 German and international cargo airlines are “ready to tackle these challenges” and contribute to “a successful and competitive development of the future of the German air cargo and logistics industry.”

Oman Air Cargo has awarded CHAMP a five-year contract for its suite of e-cargo solutions. Seeking solutions for the next…