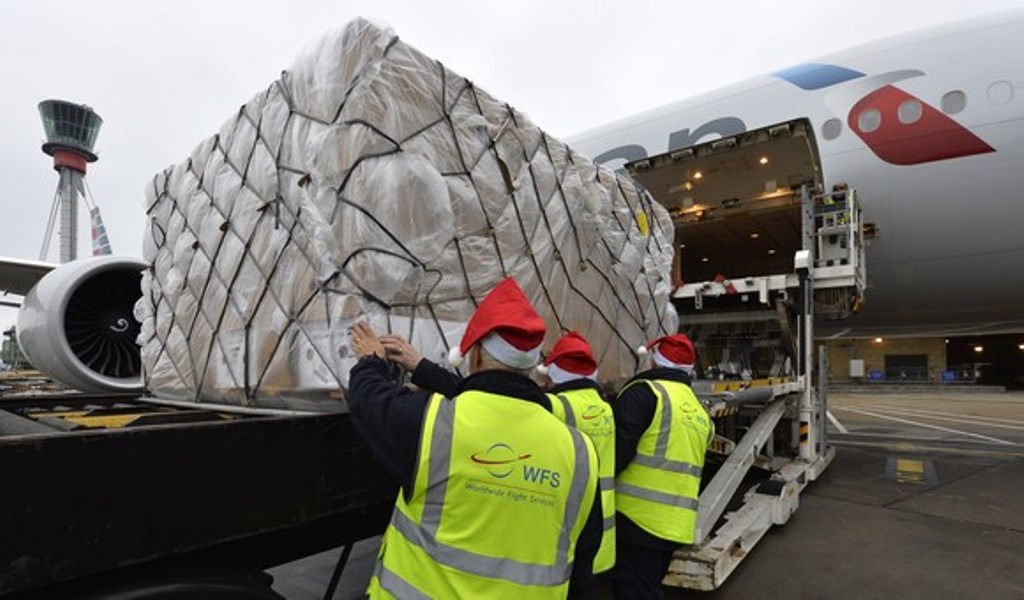 The Christmas/holiday season press releases have been coming thick and fast over the last few days and this morning Air Cargo News is happy to bring you updates on cargo surges for seasonal goods from Heathrow and Air New Zealand.
The UK airport said that it expects 140,000 tones of Christmas cargo to fly through Heathrow during the holiday season.
As is traditional with weight and size related news, the airport has helpfully related the weight of cargo to recognisable objects to help us understand the sheer scale of the task at hand.
For example, the 140,000 tonnes it expects to transport over the festive period is apparently the same as 66 London Eyes.
For the less weighty sectors of cargo, the airport has related these to the weight of Black Cabs (TX4 model) seen on the streets of the UK.
The airport’s analysis of Seabury cargo data over November and December 2017 reveals a clear spike in the export of certain Christmas essentials ahead of the holidays, including:

The same data shows over £112,000 worth of rose bushes and over £97,000 of cigars travelled through Heathrow at the same time.
The figures also reveal a spike in the number of Christmas trees, snowploughs and snowblowers in Heathrow’s cargo in the run up to the festive season.
Fresh salmon is undisputedly the most popular export by weight – with 4.6m kg being transported through Heathrow in November to December 2017 to destinations all around the world.
The airport’s cargo data shows over a quarter of Heathrow’s total exports travelled to Christmas customers in the US (26%), with China following next (11%).

Nick Platts, Head of Cargo at Heathrow Airport said: “Many of our passengers don’t realise the amount of cargo that is under their feet when they fly nor the essential role Heathrow plays in getting not only people to Christmas festivities across the world, but also the key ingredients for those celebrations. We are very proud to be making a big contribution to spreading British Christmas cheer around the globe again this year.”
Meanwhile, Air New Zealand is working with meat processors and exporters from around the country to move more than 700 tonnes of lamb to the UK in the lead up to Christmas.
More than 1,000 tonnes of Central Otago cherries will also be sent to Asia and the US over the summer season – that’s more than 65m individual cherries.
Air New Zealand general manager cargo Rick Nelson said: “There’s a huge demand for New Zealand meat in Europe and particularly for lamb at Christmas time in the UK. We work closely with our freight forwarding partners to get these premium Kiwi products offshore in the lead up to the festive season.”
“We play a key role for the nation’s export industry, carrying around 3.2 million kilograms of meat such as lamb, beef and venison to export markets annually via our extensive global cargo network, with the holiday season being one of our busiest times.”
Capsicums, crayfish and salmon are other in-demand export items at this time of year which Air New Zealand carries around the world.