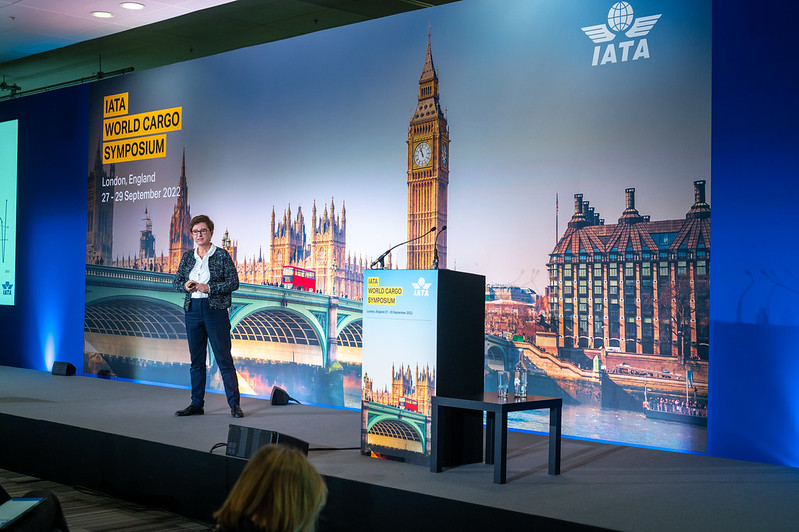 IATA chief economist Marie Owens Thomsen turned to her native language of Swedish when asked to outline the current state of the air cargo market, describing it as lagom – not too hot, not too cold.

Speaking to the press after the IATA World Cargo Symposium (WCS) opening, Thomsen said that trade volumes had slowed this year following the Covid-rebound year of 2021, but they hadn’t gone into decline.

Thomsen said that it was human nature to view a slowdown in growth negatively, but that isn’t necessarily the case when the trade figures are examined from an economic point of view.

“In terms of economic policy and planning, lagom is a great place to be. It’s a place where things are a little bit more stable and that can be good.”

However, it won’t be all plain sailing – the air cargo market and trade in general face many challenges in the future.

“The indicators such as the PMI and the new export orders are not pointing upwards at the moment and there is a question about which countries will enter a recession and whether there will be a global recession.

“The US is already in recession and we would expect Germany to experience a recession.

“Meanwhile, we expect China not to grow more than 3% this year which would be the lowest growth rate in China in more than 40 years.”

She said another risk to trade volumes is excessive monetary policy tightening, although that is yet to happen.

“The final major risk in terms of global recession is chaotic monetary markets with significant swings,” she added.

Earlier in the day, Thomsen had given a whirlwind walkthrough of various trade and aviation statistics that indicated the outlook for air cargo.

She said that in 2023 global GDP growth was predicted to slow from this year’s expected 3.2% increase, which she said isn’t such a bad performance compared with historic growth levels.

Meanwhile, continued job growth should help allay some fears, but there is an acute and mounting inflation risk in many countries.

Thomsen added that cargo traffic was also proving resilient despite the declines in demand reported so far this year – in its latest market round up the airline association said that air cargo traffic in July fell by 9.7% year on year in cargo tonne km terms and was 3.5% below 2019 levels.

Another challenge – the cost of air cargo operations continues to rise, as jet fuel prices were not falling as fast as crude oil prices.

IATA reports another drop in air cargo demand in July