IATA has told the air cargo industry it needs to adjust to the “new normal” of lower demand growth after end of year figures revealed that airfreight growth slowed to just over 2% last year.
The airline association reported that air cargo demand increased by 2.2% year on year in 2015, compared with an increase of 5% in 2014.

It said the slower growth rate was a reflection of “sluggish trade growth in Europe and Asia Pacific”.
Cargo demand in Asia Pacific expanded by a moderate 2.3% last year, the key markets of Europe and North America were flat in 2015, Latin America suffered a decline of 6%, the Middle East grew strongly, up 11.3%, and Africa saw modest growth of 1.2%.
With supply increasing by 6.1%, ahead of demand, load factors also slid, ending the year at 44.1% against 45.7% in 2014. 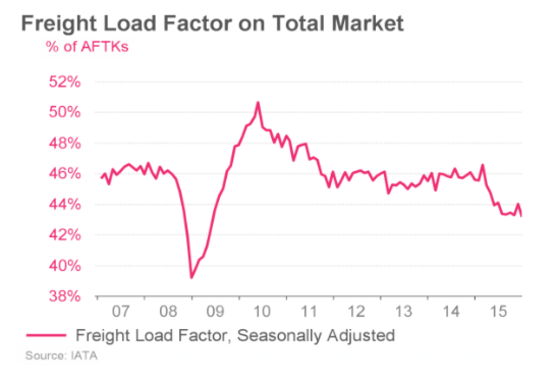 Load factors in December were strongest for Asia Pacific airlines at 59.1% and weakest for African firms at 35.1% (see below).
The organisation is expecting a difficult year ahead with cargo revenues expected to dip.
IATA’s director general and chief executive Tony Tyler said: "2015 was another very difficult year for air cargo. Growth has slowed and revenue is falling.
“In 2011 air cargo revenue peaked at $67bn. In 2016 we are not expecting revenue to exceed $51bn. Efficiency gains are critical as the sector adjusts to shortening global supply chains and evermore competitive market conditions.
“We have to adjust to the ‘new normal’ of cargo growing in line with general rates of economic expansion. The industry is moving forward with an e-freight transformation that will modernise processes and improve the value proposition. The faster the industry can make that happen, the better."
With regard to the growth slowdown in Asia, IATA said that carriers in the region experienced declines in airfreight throughout the first half, consistent with significant falls in trade to/from emerging Asia.
However, the fall in trade volumes rebounded in the third quarter and the recent trend in monthly volumes for Asia Pacific airlines suggests that the earlier declines have bottomed out.
For Europe, IATA said that although economic conditions showed some improvement in the Eurozone, trade (particularly exports) was subdued and hampered demand for airfreight. Imports, however, have been improving over recent months.
The picture for North America was not optimistic.
“After a temporary boost to airfreight demand due to seaport congestion early in 2015, airlines in the region have experienced sustained weakness for much of the year," IATA said.
“Recent month-to-month results, including the 0.9% expansion in December compared to November, suggest that weakness in volumes earlier in 2015 has come to a halt.
“However, most recent readings of exports orders have been very close to indicating contraction, which doesn’t bode well for US trade export volumes.” 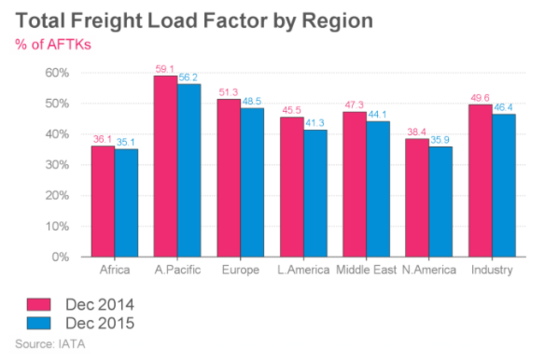