IATA warns over protectionism as cargo traffic continues to grow Air cargo traffic continued to improve in February, but IATA has again warned of the impact protectionism could have on the market.
According to the latest IATA figures, cargo traffic in freight tonne km terms increased by 6.8% in February, while over the first two months of the year demand is up 7.7%.
Freight capacity, measured in available freight tonne km, grew by 5.6% year on year in February  meaning demand growth has outstripped capacity additions for the 19th month in a row.
As a result freight load factors for February stood at 44.4%, up 0.5 percentage points compared with a year ago. IATA said the growth is consistent with ongoing robust global trade flows.
However, the organisation warned there were some concerns. IATA director general and chief executive Alexandre de Juniac said: “The positive outlook for the rest of 2018, however, faces some potentially strong headwinds, including escalation of protectionist measures into a full-blown trade war.
“Prosperity grows when borders are open to people and to trade, and we are all held back when they are not.”
De Juniac’s warning comes as the US and China seem to be heading towards a trade war. China said it would place 25% trade tariffs on 106 US goods, including soybeans, aircraft and orange juice.
This comes shortly after Washington named 1,300 Chinese products it intended to hit with tariffs of 25%. The US also imposed tariffs on aluminium and steel earlier in the year.
IATA warned there were other signs of a slowdown: “Demand drivers for air cargo are moving away from the highly supportive levels seen last year.
“In recent months the Purchasing Managers’ Index (PMI) for manufacturing and export orders has softened in a number of key exporting nations including Germany, China and the US.”
The organisation made similar warnings at its annual symposium and in its last market wrap up.
Looking at regional performance, Asia-Pacific airlines saw demand in freight volumes grow 6.5% year on year in February and capacity increase by 7.2%.
“As the largest freight-flying region, carrying close to 37% of global air freight, the risks from protectionist measures impacting the region are disproportionately high,” IATA said.
North American airlines’ freight volumes expanded 7.3% in February compared to the same period a year earlier, and capacity increased by 4.1%.
The weakening of the US dollar over the past year has helped boost demand for air exports.
European airlines posted a 5.7% increase in freight volumes in February 2018. This was almost half the rate of the previous month and the slowest of all regions.
“The strength of the euro and the risks from protectionist measures may impact the European freight market which has benefitted from strong export orders,” IATA said.
Middle Eastern carriers’ year-on-year freight volumes increased 7.4% in February and capacity increased 7.6%.
This largely reflects the weak conditions on the routes to and from Europe which have seen demand trend downwards at a double-digit rate over the past five months.
Latin American airlines experienced growth in demand of 8.7% in February and a capacity increase of 6.9% as Brazil continued to recover.
African carriers’ saw freight demand increase by 15.9% in February compared to the same month last year – the largest increase of any region – driven by improvements on Asia trade lanes.
Click on chart for interactive version 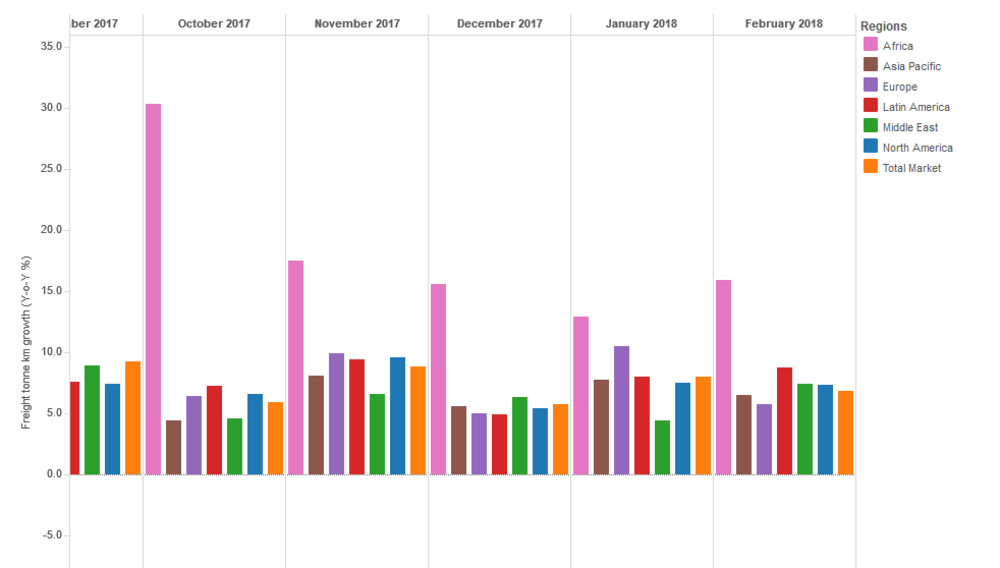