Air cargo demand growth edged up in November despite a slowdown in October and indicators suggesting the sector has passed a cyclical growth peak.
Figures from IATA show that air cargo traffic in freight tonne km (FTK) terms increased by 8.8% year on year in November compared with the 5.8% rise registered in October.
While the improvement registered in November does lag behind an improvement of 9.7% over the first 11 months of the year, it is far ahead of the ten-year average growth rate of 3.3%.
The figures mirror those of analyst WorldACD, which said the industry registered a 7.8% improvement in air cargo volumes in November, a new monthly record.
Capacity during the month was up by 4% on a year earlier and as a result the freight load factor reached 49.1%, up 1.9 percentage points compared with last year.
IATA said the uptick in freight coincides with the traditional period of strong demand.
The organisation said that the Purchasing Managers Index for manufacturing and export orders, which has tracked sideways for much of 2017, reached a seven-year high in the fourth quarter signifying that growth is carrying momentum into 2018.
IATA director general and chief executive Alexandre de Juniac said: “November showed 8.8% year-on-year growth, keeping up the momentum that will make 2017 the strongest year for air cargo since 2010.
“There are several indicators that 2018 will be a good year as well. Buoyant consumer confidence, the growth of international e-commerce and the broad-based global economic upturn are cause for optimism as we head into the New Year.”
Looking at regional performance, Asia-Pacific airlines saw freight volumes increase by 8.1% and capacity expand by 1.2% in November, compared to the same period last year.
“The region’s manufacturers continue to enjoy buoyant export order books.
“The major exporters in China and Japan are reporting rising demand supported in part by a pick-up in economic activity in Europe and a continued solid performance from the US. This is expected to support demand into the New Year,” IATA said.
North American carriers posted an increase in freight volumes of 9.6% for November.
Capacity increased 3.9%. The strength of the US economy and the US dollar have improved the inbound freight market in recent years.
European airlines posted a 9.9% increase in freight demand in November and a capacity increase of 4.7%.
“Concerns that the recent strengthening of the euro might have affected the region’s exporters have not materialised. Europe’s manufacturers’ export orders are growing at their fastest pace on record,” IATA said.
Middle Eastern carriers’ year-on-year freight volumes increased 6.6% in November and capacity increased 3.1%.
At Latin American airlines there was a 9.4% growth in demand in November and a capacity increase of 11.1%.
The pick-up in demand comes alongside signs of economic recovery in the region’s largest economy, Brazil.
Finally, African carriers posted the largest year-on-year increase in demand of all regions in November, with freight volumes rising 17.5%, while capacity increased 24%.
This is the thirteenth month of double-digit increases, boosted by strong growth in Africa-Asia trade.
Click on chart below for interactive version 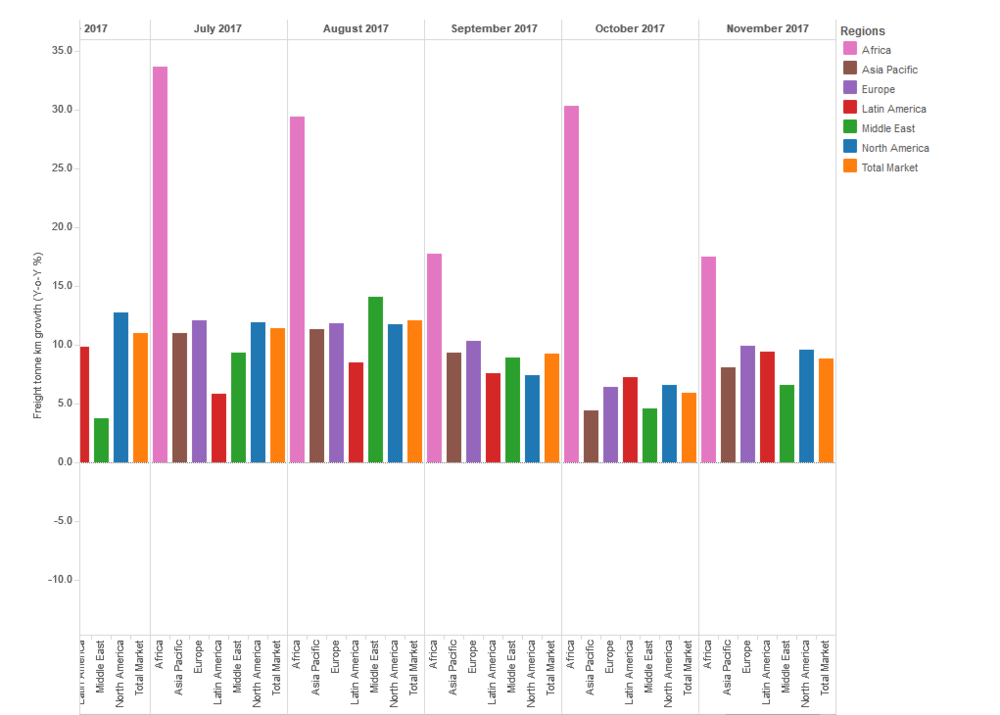