Air cargo on the up in May, but growth could have peaked

Airfreight demand growth improved at a double-digit pace in May, but indicators suggest improvements have peaked.
The latest statistics from airline association Iata show that air cargo demand in freight tonne km terms increased by 12.7% year on year in May, up from the 8.7% registered in April and well ahead of the five-year average of 3.8%. For the year-to-date, demand is up by 10.2%.
The demand improvement also helped push cargo load factors up to 45.2% − the highest level since July 2014.
Statistics from analyst WorldACD mirror those reported by Iata, showing that May saw chargeable airfreight weight increase by 12.8% year on year despite concerns that demand growth had reached its peak in the first three months of the year and would slow from here on in.
Click here for more data dashboards or on the chart below for the interactive version 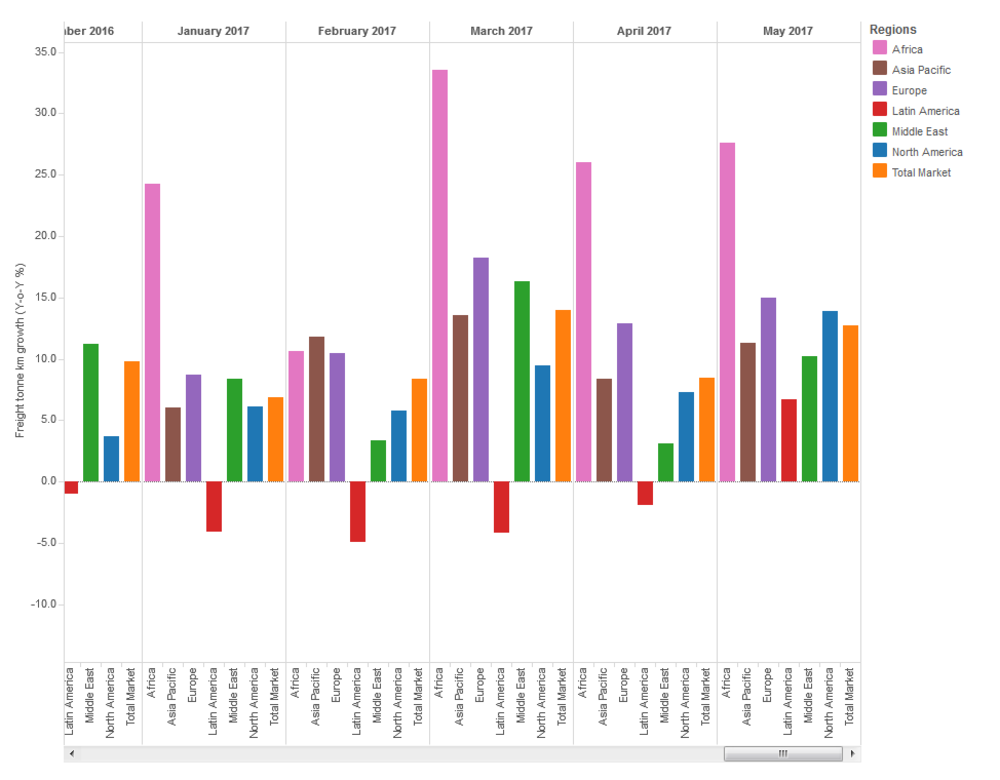 Iata said the improvement was set against a stronger economic and trade backdrop, with the global purchasing managers’ index (PMI) remaining close to a six-year high and growing export order books for global manufacturers.
The organisation also pointed out that air cargo supply chains allowed companies to quickly restock at the start of a pick-up in the economic cycle.
However, Iata said that growth may have now reached its peak. The airline group said that while the PMI index was still high, it was lower than the February peak and the inventory-to-sales ratio was beginning to creep up, although it is still lower than last year.
This view is reflected in the APAC Index forwarder survey that was published earlier today.
Iata director general and chief executive Alexandre de Juniac said: "May was another good month for air cargo. Demand growth accelerated, bolstered by strong export orders, and that outpaced capacity growth, which should be positive for yields.
“But the industry can’t afford to rest on its laurels. With indications that the cyclical growth period may have peaked, the onus is on the industry to improve its value proposition by accelerating process modernisation and enhancing customer-centricity."
Looking at regional performance, Asia-Pacific airlines’ freight volumes expanded 11.3% in May compared with a year earlier and capacity increased by 6.2%.
“Demand growth has been strongest, between 13-15%, on international routes within Asia as well as between Asia and Europe,” Iata said.
North American carriers posted an increase in freight volumes of 13.9% and a capacity increase of 4.1 as strength of the US dollar continues to boost the inbound freight market but is keeping the export market under pressure.
At European airlines there was a 15% improvement in freight volumes in May 2017 and a capacity increase of 5.7%.
Iata said: “International freight volumes grew by 15.2% year on year in May with airlines benefiting from strong demand on the Europe-Asia market.
“The ongoing weakness of the euro persists in boosting the performance of the European freight market which continues to benefit from strong export orders.”
Middle Eastern carriers’ year-on-year freight volumes increased 10.2% following on from a 3.1% dip in April.
The recent swings in the growth rate appear to be mainly a reflection of the more volatile monthly data last year.
Latin American airlines experienced a growth in demand of 6.7% compared with the same period in 2016, although they are still down on seasonally adjusted levels in 2014.
African carriers’ posted the largest year-on-year increase in demand of all regions in May 2017 with freight volumes growing 27.6%. Capacity increased by 14.7% over the same time period.
“Demand has been boosted by very strong growth on the trade lanes to and from Asia which have increased by nearly 57% so far this year,” Iata explained.