The latest indicators from IATA and analyst WorldACD show that air cargo demand growth has continued to weaken as the year has progressed.
Figures from IATA show that airfreight traffic growth stood at 2.3% year on year in August, compared with 4% over the first eight months of the year.
Meanwhile, WorldACD figures show that volume growth stood at 0.6% in August, which it said was the third month in a row showing minimal growth.
IATA said that freight capacity for the month was up by 4.5% and as a result freight load factors slipped to 42.2%, down 0.9 percentage points.
Although recent figures do show a slowdown in growth, they do follow on from a particularly strong 2017.
IATA said that growth is supported by buoyant consumer confidence, an upturn in the global investment cycle and growing international e-commerce.
On the other side, demand is negatively affected by a weakening in export order books, specifically in Europe, China, Japan and Korea, longer supply delivery times and risks to global trade from recent trade tensions.
IATA director general and chief executive Alexandre de Juniac said: "August demand for air cargo grew at 2.3%, unchanged from the previous month.
“Buoyant consumer confidence, the growth of international e-commerce and the broad-based global economic upturn are behind the growth.
“But there are downside risks. Order books are weakening and supply delivery times are lengthening. And the growing trade tensions are a specter over the industry.
“The early focus of tariffs was not on products typically carried by air. But as the list of tariffs grows so does the air cargo industry’s vulnerability. And, we can expect souring trading relations to eventually impact business travel. There are no winners in trade wars.”
IATA figures show that Asia-Pacific airlines saw demand for airfreight grow by 1.6% in August compared with the same period last year.
“This was an increase over the previous month but a marked slowdown in growth from the past year,” IATA said. “Weaker manufacturing conditions for exporters, particularly in Japan and China, have impacted the demand.”
“As the largest freight-flying region, carrying more than one-third of the total, the risks from protectionist measures are disproportionately high.”
North American airlines’ freight volumes expanded 2.8% during the month thanks to “the recent momentum of the US economy and solid trade flows across the Atlantic”.
European airlines, meanwhile, posted the fastest growth of any region in August, with an increase in demand of 3.7%.
The increase came despite a weakening in manufacturing firms’ export order books in Europe, particularly Germany.
“Strong conditions on the transatlantic market and a pickup in demand between Europe and Asia have driven this growth,” IATA said.
Middle Eastern carriers posted a 2.2% increase in freight volumes in August, a “significant deceleration in demand over the 5.4% recorded the previous month”.
Latin American airlines experienced an increase in freight demand growth in August 2018 of 1.6%.
IATA said: “Nevertheless, the broader pick-up in demand seen over the last 18 months has now paused.”
Finally, African carriers saw freight demand contract by 7.1% – the fifth time in six months – as demand conditions on all key markets to/ from Africa remain weak.
Click on chart for interactive version 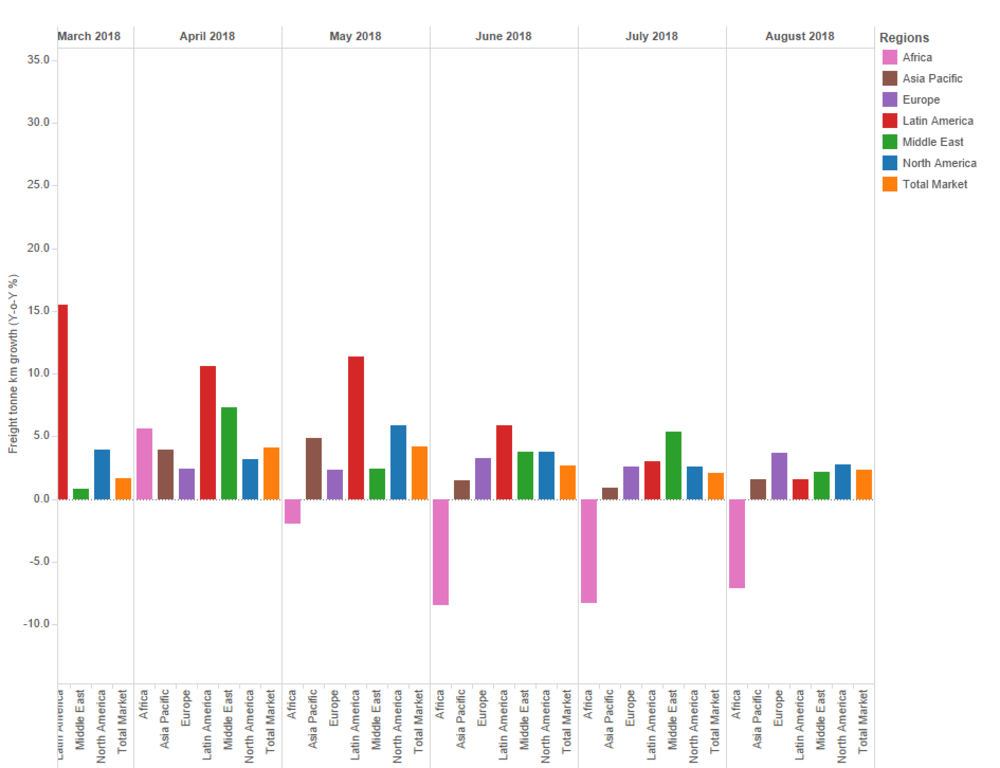