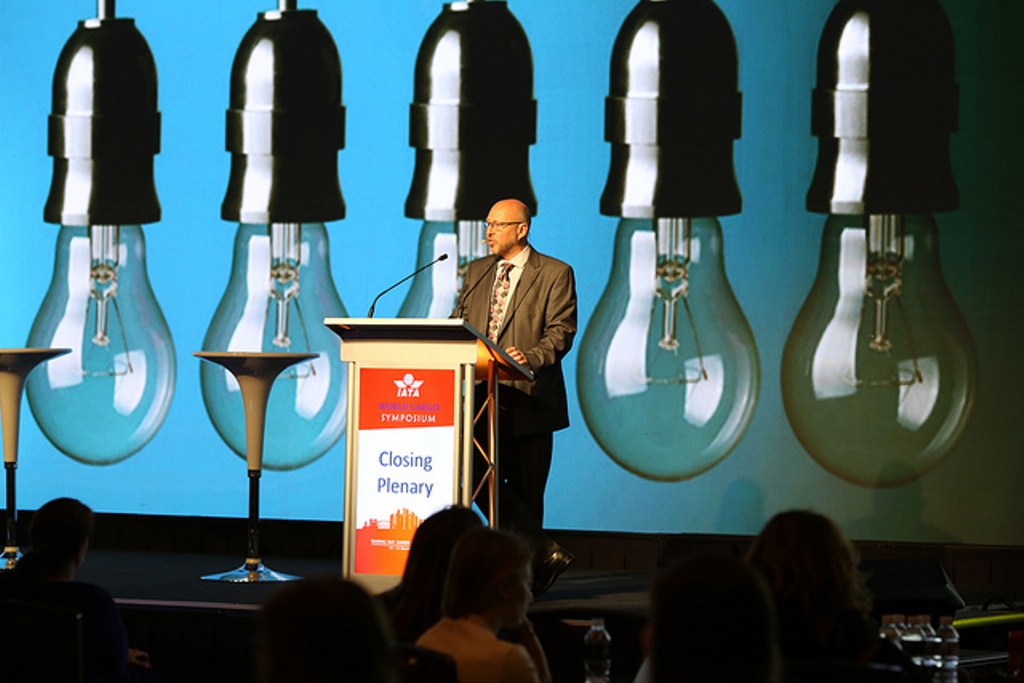 IATA Cargo boss Glyn Hughes, speaking after the three-day World Cargo Symposium (WCS) in Singapore, said that there was a mood of “buoyancy and optimism” among the record attendance of nearly 1,300 industry experts.

This was despite IATA kicking off the WCS by lowering its 12 month growth projection for freight tonne km (FTK) to 2%.

Said Hughes: “The fact that it [WCS] had a record attendance was spectacular, but it was more about the buoyancy, optimism and passion that was displayed, even though this year had started particularly poorly with a 1.8% contraction in January.

“This industry is more resilient than it has been in the past, with strong and positive signs, those being the growth in specialist products and e-commerce.”

He said that one of the “resounding infrastructural changes” seen over the last couple of years is that, previously, a global financial crisis or other economic turbulence “meant that the cargo has stopped”.

Hughes continued: “But now with e-commerce and special cargo, it is almost a built-in resilience to other factors, so we are somewhat cushioned from the full depth of the slowdown in international trade.”

He said that signs of progress in the US-China trade talks and hoped-for clarity over Brexit were good news for the air cargo industry: “In whatever form it takes, clarity is clarity, and it is uncertainty which causes consumers to be more cautious and to stop spending.

“Of course we are also buoyed by the fact that passenger growth has continued at very high levels of 6.6%, which tells us that the global economic prosperity and boom is continuing.

“The growth of the middle classes, another 100+ million joining the consuming classes, particularly in China and Southeast Asia, and the reduction in unemployment in the US, all these are very positive factors. So people are flying and people will be buying.”

Despite a slowdown in the first two months of this year, Hughes said that he was “very confident” that after the areas of uncertainty are resolved, then the industry can return to a “growth trajectory”.

Hughes said that almost every track at the WCS included digitisation, information sharing and collaborative working.

“Those three themes are common for every area and the industry needs to tackle them. We’ve got some challenges to really embrace this, but at the cargo committee meeting I have never seen the heads of cargo so bullish about embracing technology.

“They know that we don’t have five years and that we have to do these things in three years, because if we don’t, somebody else will. That is the very strong message that we are going to carry through the next 12 months, which is all about the pace and acceleration of change.”

IATA’s head of cargo said that the airfreight industry is “probably at its most innovative than at any point in its history”.

While conceding that there was an element of catch-up for the air cargo industry, Hughes added that stakeholders are “bridging the gap” in digitisation and applying new solutions more quickly than in the past.

“That is a very long process and arguably not innovation but just natural progression. Now people are saying, hey, I’ve tried this and showcased it. And what people are actually trying becomes the basis for a global standard.

“That leads to a much more dynamic environment which means innovation, and more importantly, being ahead of the pack. That is really a bright future.”

Although a representative of Amazon was in the audience, no one from the global e-tailer, with a burgeoning US fleet of leased freighters, was a WCS speaker or panelist.

Hughes was asked if IATA was hopeful of getting Amazon to provide a speaker at the 2020 WCS, in Istanbul?

“Amazon have been here this week and now participate in all of our events and are working as a strategic partner. I put that question to Amazon, we would love to hear you on the panel, and I believe they are thinking about it.”

Hughes said that he had “banned” the words disruptor, disruption or disrupting influence, saying that the word disruptor has a negative aspect: “People use it to justify non-innovatory methodology, it is not embracing the future.”

He prefers the words opportunities and challenges rather than disruption because “there is an opportunity that exists in every challenge created”.

He added: “If we ever get to a point at any event where we sit down and say ‘guys, job done, ticked the box, you have innovated enough, you are working collaboratively,  just keep doing what you’re doing,’ then we are finished.”

Highlights of the WCS below:

British International Freight Association (BIFA) has defended forwarders “tarred as having a reputation as technology laggards”. The defence follows yesterday’s…