Electronic AWBs nudge up but it’s too little, too late for IATA target 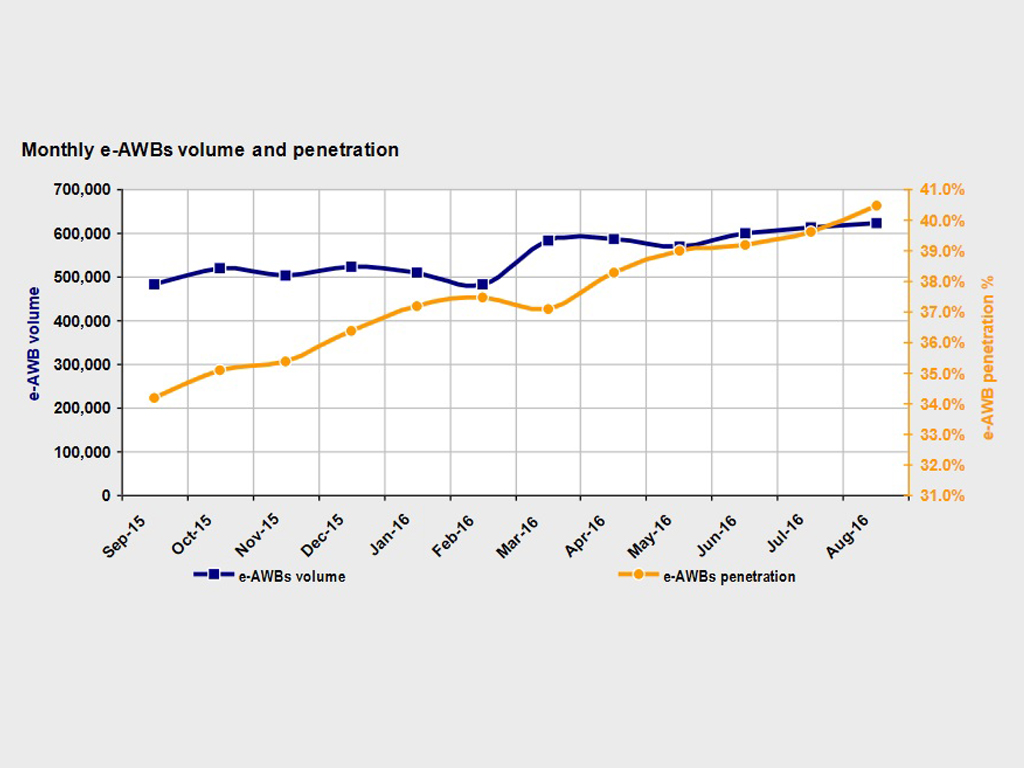 Electronic-air waybill (e-AWB) usage ticked up slightly in August but still seems set to miss IATA’s end of year target. Penetration reached 40.5%, up 0.9% on July’s 39.4%, but still a long way short of the 56% goal set by the industry association.
The e-AWB movement has been dogged by frustratingly slow progress since the beginning of 2016, when the usage rate stood at 36.4%.
However, IATA hopes that its 360 programme, which requires airlines and ground handling agents to offer an e-AWB as the preferred documentation to all destinations and adopt a single process service and a standard operating procedure, will eventually help boost penetration.
Electronic AWB penetration rates remain low in a number of major economies, including the US where it stood at 37.2% (although it is the top country in terms of the absolute number of e-AWBs). Germany achieved only 27.9% penetration, although it accounted for the sixth highest number of e-AWBs.
Most major airfreighting countries and airports did achieve modest increases in e-AWB penetration rates in August compared with July, but generally only of the order of 1% or less. In star preforming airport, Dubai, the proportion actually fell slightly from 91.5% to 89.8%.
Flydubai achieved 100% e-AWB penetration in August (as it did in the previous month) followed at some distance by Federal Express (71.5%), Cathay Pacific (70.9%) and Kenya Airways (70.4%).
The top airline in terms of e-AWB volume was Cathay Pacific, followed by Air France-KLM, Emirates and SIA; however, penetration rates at these carriers was relatively modest – only 36.3% in the case of Emirates.
Among freight forwarders, Hellmann Worldside achieved the best penetration rate (64.2%) and then Expeditors (58.4%) and Panalpina (57.8%).
DHL Global Forwarding led the field in terms of e-AWB volume, followed by Schenker and Panalpina.