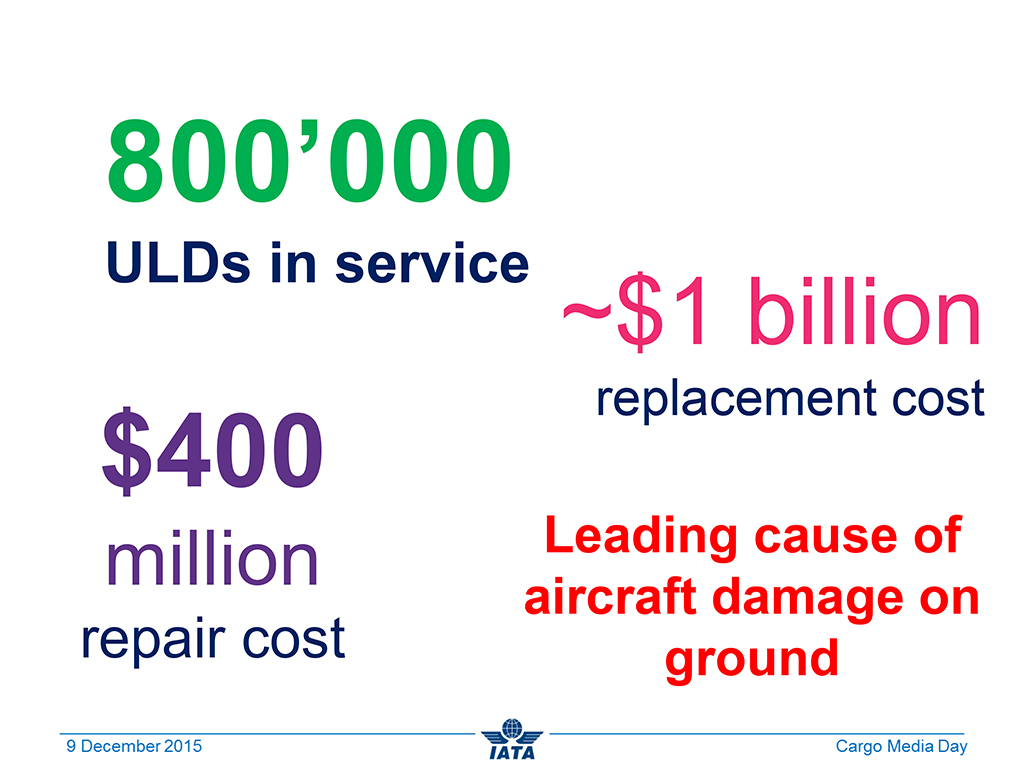 It’s a rough and tumble life being an airfreight unit load device (ULD).
Despite being regulated as an aircraft part, the containers used for baggage and cargo still have a $300m annual repair bill due to ‘bends, scrapes and holes’.
As the only aircraft equipment that travels up and down the logistics chain, the ULD takes a bit of a battering but it can also dish it out too.
There are some 800,000 ULDs currently in service, with an asset replacement value of around $1bn, but they are also the leading cause of aircraft damage on the ground, totalling an extra £100m.
IATA is on the case to reduce this total $400m cost and suggests that a modest $20m investment in lightweight containers on suitable routes, plus greater awareness of ULD care, can cut $315m off the annual invoice.
Brendan Sullivan, head of cargo operations at IATA, said: “While we see a rise in the use of widebody aircraft, we also see a rise in the outsourcing of ULD operations, and so we end up with a rise in the number of people who are going to handle a very, very important aircraft part that plays a vital role in flight safety as well as safety on the ground.
“We have been working on how we build up awareness in the industry and how we tackle some of the problems that we see.”
The implications of a damaged ULD go beyond the unit itself, explained Sullivan: “Every year the industry spends $300m in ULD repair costs to fix them when damaged. People bend them, scrape them and put holes in them, and imagine what damage can happen to aircraft if you are try to move damaged ULDs around.
“A ULD that is ill-fitting and will not go through the aircraft door, it may strip the outer edges of the door and may bang into things.”
In terms of the damage rate per 10,000 cycles, the humble ULD cause more harm to aircraft on the ground high-loaders, passenger stairs and air-bridges. It is even ahead of the all-encompassing ‘other’ category.
The ULD damage trend is static, said Sullivan, adding:  “We really need to encourage the industry to get that trend moving downwards, as we don’t want to be the leading cause of aircraft damage on the ground.”
IATA has developed a ULD quality and safety programme with four key areas: ULDs are aircraft parts and are critical to flight safety; correct ULD handling ensures safety; safety is everybody’s business; correct ULD handling reduces costs & improves efficiency.
And while outsourced ULD management is on the increase, as is the use of lightweight containers, IATA has not seen any link by either to increased unit damage.
IATA is getting involved in a staff training programme to increase the awareness of the ULD damage problem, and is launching a tracking device, which will “track where ULD went, who it went to and in what condition it went and how it came back”.
Put together, lightweight containers and staff awareness training have already produced results, said Sullivan: “Those airlines that have implemented it have spoken of safety and efficiency improvements that they gained.”