Air cargo started 2018 with robust growth as demand drivers remained supportive, but a potential trade war could hinder growth in the future.
The latest figures from IATA show that cargo traffic in freight tonne km terms increased 8% year on year in January, up on the 5.8% improvement registered in December.
Freight capacity for the month rose by 4.2% during the month and as a result cargo load factors improved by 1.5 percentage points to 43.3%.
The airline organisation said the improvement reflected buoyant demand for manufacturing exports leading to increases in supply chain delivery times and demand for faster transport solutions.
It should also be mentioned that the timing of the Chinese New Year can affect demand trends and February’s figures will give a clearer picture of how the market is progressing.
IATA also warned that recent rhetoric around potential trade wars could have a negative impact on growth in the future.
IATA director general and chief executive Alexandre de Juniac said: "With 8% growth in January, it’s been a solid start to 2018 for air cargo. That follows an exceptional year in which demand grew by 9%.
“We expect demand for air cargo to taper to a more normal 4.5% growth rate for 2018. But there are potential headwinds.
“If President Trump follows through on his promise to impose sanctions on aluminum and steel imports, there is a very real risk of a trade war. Nobody wins when protectionist measures escalate.”
The US president has said the country will place a 25% tariff on steel products and a 10% tariff on aluminium.
The new tariffs are set to be signed this week, although it has been suggested the tariffs will only last 30 days and could be softened for Mexico and Canada depending on how negotiations on the North American Free Trade Agreement progress.
In response, the European Union has said it will impose import duties on bourbon, peanut butter, cranberries, orange juice, steel, and industrial products. In light of this, the president said the US would increase taxes on European cars.
China has said it would issue an "appropriate and necessary response.
Looking at carrier performance regionally, Asia-Pacific airlines saw demand in freight volumes grow 7.7% year on year in January and capacity increased by 2.2%.
The increase largely reflects the ongoing strong demand experienced by the region’s major exporters, China and Japan, which has been driven in part by a pick-up in economic activity in Europe.
North American airlines’ freight volumes expanded 7.5% in January year on year, as capacity increased 4.2%.
The strength of the US economy and the US dollar have improved the inbound freight market in recent years.
However, this may be offset by the weakening in the dollar although the recently-agreed US tax reform bill may help to support freight volumes in the period ahead.
European airlines posted a 10.5% increase in freight volumes during the month.
"The strong European performance corresponds with a very healthy demand for new export orders among the region’s manufacturers," IATA said.
Middle Eastern carriers’ freight volumes increased 4.4% in January. The region’s carriers remain affected by the ongoing challenging political environment in the Middle East.
Latin American airlines experienced a growth in demand of 8%. The pick-up in demand comes alongside signs of economic recovery in the region’s largest economy, Brazil.
African carriers’ saw freight demand increase by 12.9% in January 2018 compared to the same month last year.
Said IATA: "The increase was helped by very strong growth on the trade lanes to and from Asia. Freight demand jumped by 59% between Africa and Asia in 2017 following an increase in the number of direct flights between the continents, driven by ongoing foreign investment flows into Africa."
Click here for interactive chart 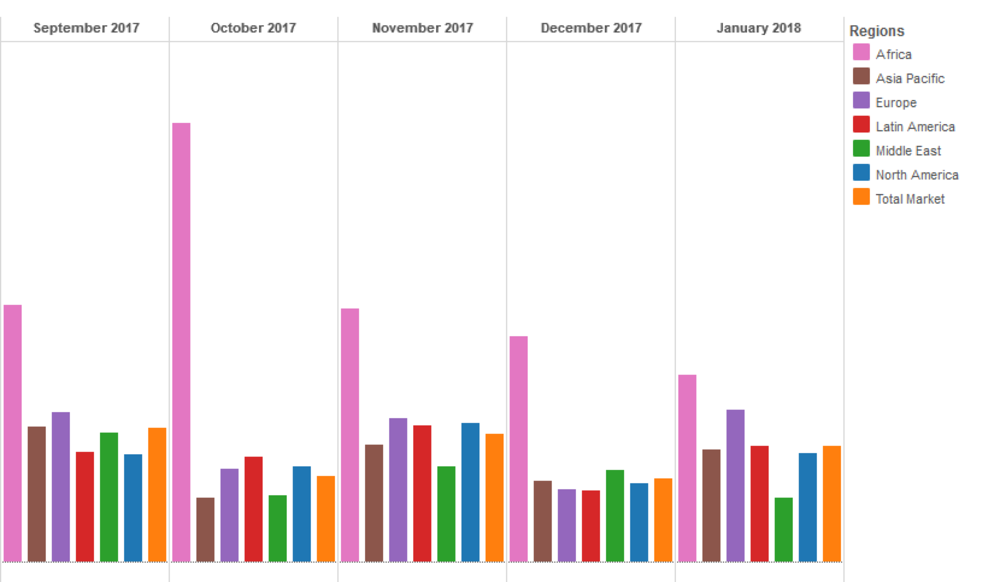