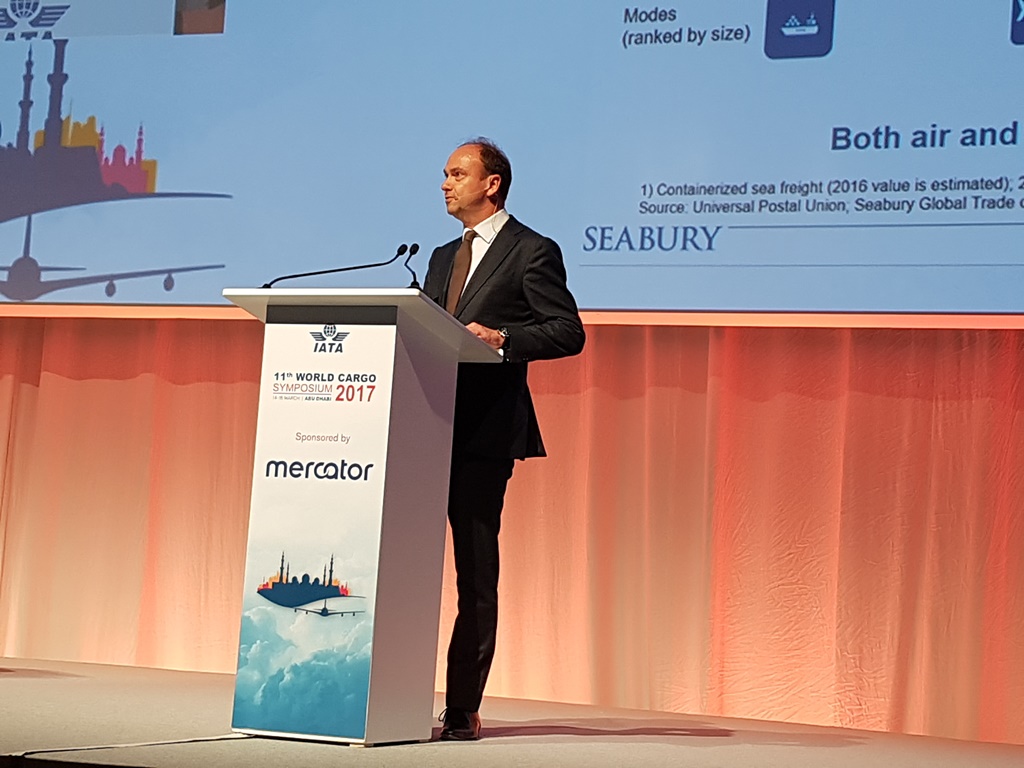 Air cargo should start taking the threat presented by China-Europe rail services seriously, but the difficulties faced by the container shipping sector could provide opportunities.
Speaking at the IATA World Cargo Symposium, Seabury Group senior vice president Marco Bloemen said that rail freight services were “no longer carrying volumes that can be ignored”.
Seabury figures show that rail volumes have increased at a compound annual growth rate of 65% between 2013 and 2016 and last year reached 511,000 tonnes.
Bloemen said: “Depending on where the trains are heading to, it takes around 14-17 days, which is a very nice alternative compared with airfreight that takes around five or six days and ocean freight that takes 35-40 days.
“We are now looking at – in 2016 − 500,000 tonnes. This is a serious flow. I realise most of the commodities will be coming from ocean freight, but even if it is only a share, say 10% of air cargo that is travelling on rail, that is 50,000 tonnes of freight and that is a big number. It has an impact and is growing fast.”
Bloemen said that the largest commodity carried by the services are raw materials with a 33% share, machinery parts at 16%, automotive representing 15%, high tech on 12%, consumer with 10% and fashion at 6%.
Meanwhile, Bloemen also re-emphasised the fact that high tech demand for airfreight services was declining, while perishables was a fast growing sector – something he first noted at the Air Cargo Forum event late last year.
Seabury figures show that volumes of laptops transported by airfreight slipped by 108,000 tonnes last year as sales declined.
In contrast, perishable transport by air cargo was up 59,000 tonnes, milk powder improved by 37,000 tonnes and fresh flowers increased by 22,000 tonnes.
This is reflected in growth in demand from countries that produce perishables, such as salmon from Chile and Norway, vegetables from Peru and India, and fresh meat from Australia.
E-commerce growth was another area of opportunity for air cargo, but not just parcel volumes, but the also industrial consumables, machinery parts and fashion shipped by fast growing Alibaba.
Meanwhile, Boeing Commercial Airplanes regional director, airline market analysis marketing & business development Tom Crabtree presented Boeing’s thoughts on how air cargo demand will progress over the coming years and how this will affect the freighter market.
One new opportunity he identified could be the current problems facing the container shipping industry.
“Last year, by our estimates, the container shipping industry lost $4bn and the amount of capacity on order to augment the 5,200 containerships that ply the world’s maritime trade routes is down to about 15% [of the existing fleet] and it has not been that low for about 19 years,” he said.
“A consequence of that is that our sector stands to potentially benefit over the next two years − how much? I do not know, but it is something we should keep an eye on.”
Crabtree also spoke of Boeing’s belief that freighters would continue to represent around 50% of the world’s cargo capacity.
He said this belief was based on historical trends, growth in air cargo demand, which Boeing estimates will be around 4.2% per year until 2035, the need to renew the aging fleet and because “unit cost is everything”.
The overall freighter fleet would grow from 1,770 aircraft last year to 3,010 freighters in 2035. Of the new and converted freighters that are to be delivered over that period, 550 will be large production freighters, 400 will be widebody conversions, 380 will be medium-widebody production and 1,040 will be standard body conversions.
He added that freighters continue to play a key role in major east-west trades, representing 40% of capacity on the transatlantic, 75% on the transpacific and 80% on Asia-Europe.
Also, sixth freedom carriers will continue to use geographic location and new widebody freighter capabilities to open new markets.
He added that air cargo was a niche industry, representing just 14% of total aviation revenues, but he said it was still very important.