WCS17: IATA optimistic on growth but issues warning over protectionism 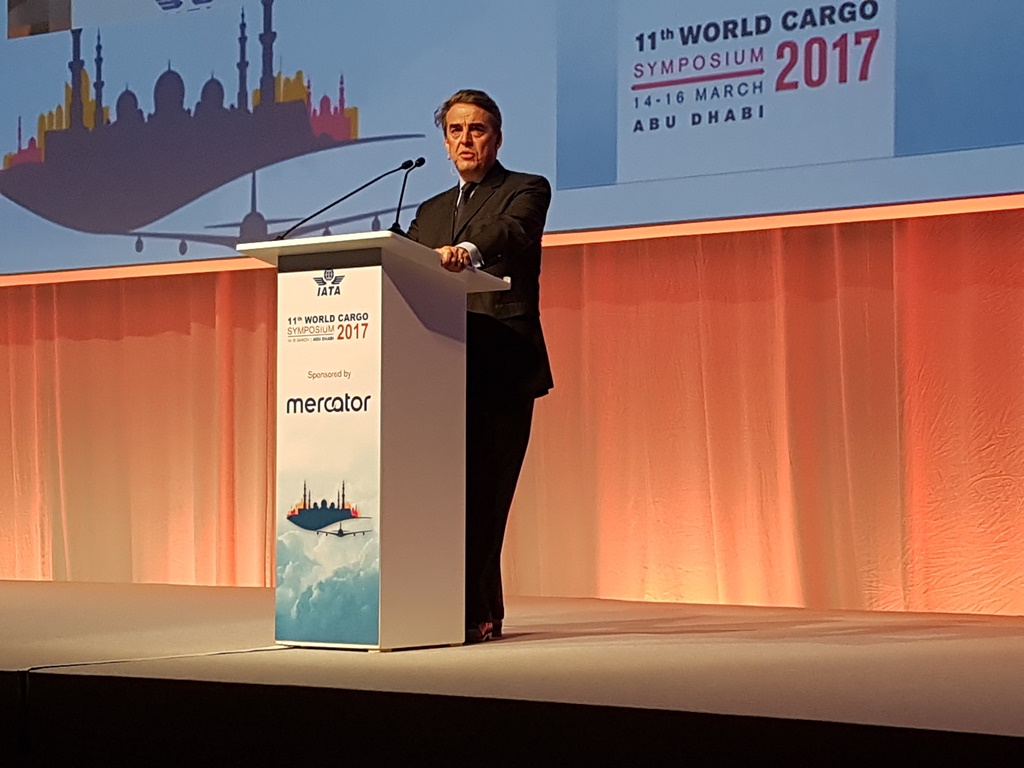 IATA director general and chief executive Alexandre de Juniac kicked off the 2017 World Cargo Symposium by speaking of the organisation’s optimism about demand growth but also warned that challenges remain.
Providing a state of the industry outlook, de Juniac begin by outlining his “optimistic view” for future growth in air cargo demand, which he said was far too rare in the industry.
“After several years of virtually no growth, we are starting to see demand pick up. Freight volumes began to grow in the second half of 2016 and momentum is continuing this year with January demand improving by nearly 7% over the previous year.
“There are some positive forces supporting growth. Export orders are strong, that is a welcome development after world trade had essentially flat lined over the last several years and e-commerce, which depends heavily on air cargo is growing at a double-digit rate. Customers in the internet age are demanding immediate fulfilment of their orders.”
He added that high value specialised cargo was also showing good growth levels, with the global pharma market expected to reach a value of $1.12trn by 2022, a high percentage of which is represented by temperature sensitive and biopharma goods typically shipped by air.
However, de Juniac said there were still challenges ahead, particularly protectionism and yields continuing to come under pressure due to oversupply.
“We must all be concerned about protectionist rhetoric that is spreading,” he said. “Aviation is the business of freedom, the industry is premised on boarders that are open to people and trade.
“That is at the heart of the important role we play in globalisation. Some hold the view that globalisation has not benefitted all equally, but the important role globalisation has played, with the help of aviation, in lifting hundreds of millions of people from poverty is undeniable.”
At a later press conference, he warned of the threat to global trade posed by “protectionist rhetoric” which he described as “bad news for the industry and bad news for the economy”.
Protectionism could see governments “raise barriers and borders” for global trade and travel, he added.
De Juniac said: “Open borders for trade and travel are the essence of our business, which fuels growth and prosperity and which allows people to build better lives.”
IATA will continue “relentlessly” to speak, inform, educate, propose and lobby in its dealing with global governments in Europe and the US.
De Juniac added that the industry must strive to understand customer needs and create products to meet those requirements, especially in fast growing areas like e-commerce and temperature sensitive cargo.
Other challenges facing air cargo included the need to remove paperwork and develop digital services, the need to innovate through development of tracking services and the use of data to create efficiencies and work with governments and other customers on the formation of the rules and regulations that govern the industry.

Turning to air cargo processes, de Juniac said that the advance of the electronic air waybill (e-AWB) will continue, with a target of 62% industry penetration by the end of 2017: “The e-AWB will make things infinitely more simple for everyone in the transportation chain.”
Glyn Hughes, head of cargo at IATA, added that some 650,000 shipments are accompanied by an e-AWB every month, without a paper document.
Hughes said that he was confident that the 62% target was realistic and would be met.
On Brexit, De Juniac emphasised that IATA would push for traffic rights and access to airports to remain undamaged by the UK leaving the European Union.

Ahead of de Juniac’s state of the industry address, Etihad Aviation Group president and chief executive James Hogan outlined how the airline had managed to rapidly grow its cargo business thanks to its focus on product development and by expanding its network through partnerships and equity investments in other airlines.
Also, UAE General Civil Aviation Authority deputy director general Omar Bin Ghaleb outlined the work it had been doing to facilitate the region as an air cargo hub and in particular its achievements when it comes to the adoption of e-AWB.