WCS17: Incorrectly loaded ULDs in the frame for damage to aircraft 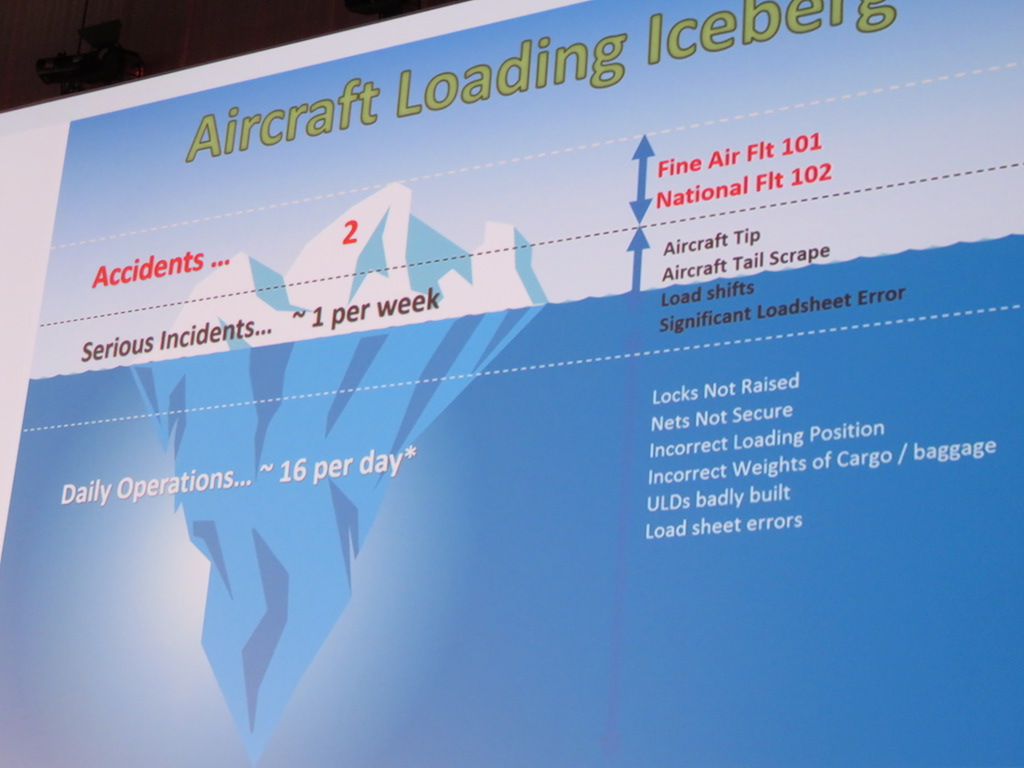 Mishandled Unit Load Devices (ULDs) are the second highest cause of damage to aircraft, while incorrect loading of cargo on an aircraft is reported on average 16 times per day.
Bob Rogers, senior advisor, Nordisk Aviation Products, told the IATA World Cargo Symposium in Abu Dhabi that incidents of cargo shifting during flight were “far too common” and that the human factor is a key element in the problem.
Rogers told the audience that cargo loaders were often working on “auto-pilot” and not acting in accordance to their training.
Referencing an IATA survey undertaken two years ago, Rogers spoke of an “aircraft loading iceberg” where aircraft losses or serious incidents of damaged aircraft are visible to the public, while incidents of internal damage caused in the cargo hold are hidden.
Such regular incidents of internal damage, up to 16 per day, were due to mistakes such as cargo nets not being secured, incorrect loading positions, badly built ULDs or load sheet errors.
Some 20% of incorrect loadings were found prior to aircraft pushback, with the remaining 80% were discovered only after the aircraft had arrived at its destination, which Rogers called “a pretty damning scenario”.
Damage inflicted on the aircraft hull is particularly dangerous because the hull is the first line of defence in retarding a fire, and so the aircraft has to be put out of service until the hull is repaired.
Rogers showed on screen some particularly bad examples of shifting cargo in aircraft hulls, sometimes due to insufficient use of straps.
He described a freighter aircraft loss in the Middle East, where a cargo of armoured vehicles shifted soon after take-off, an incident that has seen the US Federal Aviation Administration (FAA) act “like a chained dog” in tackling the issue of incorrect cargo loading.
Rogers advised air cargo professionals to read an FAA air cargo operations manual (AC 120-85) that goes some way to filling the “huge gap” between the proper loading of cargo and what can take place on the ground.
Boeing has also issued its own 44-page document, now in its fifth revision, which is a supplemental to the Weight and Balance Control Loading Manual.
Rogers said that the ultimate responsibility for safe cargo loading remained with the airlines, and observed that the traditional walk around the aircraft by pilots prior to departure was taking place less and less because of the increased workload in the cockpit.
Aircraft now have much larger bellyholds and this has increased the number of ULDs being loaded, which in turn raises the opportunity for things to go wrong.
There are a range of possible answers to the problem, ranging from additional procedures to implementing more audits, although both of these have limitations, said Rogers, who doubted whether the airline trend to outsourcing aircraft loading had been a significant factor.
He concluded that while all participants in the cargo chain are looking for efficiency, security and speed, it is safety that should be at the top of the list.

Forwarders to have a greater say in IATA’s cargo programme

Air cargo volumes returned to pre-Covid levels in January with demand even increasing compared with 2019 levels for the month….

Brian Pearce to retire from IATA

IATA’s chief economist Brian Pearce planning to retire from the association in July this year, after having served at the…