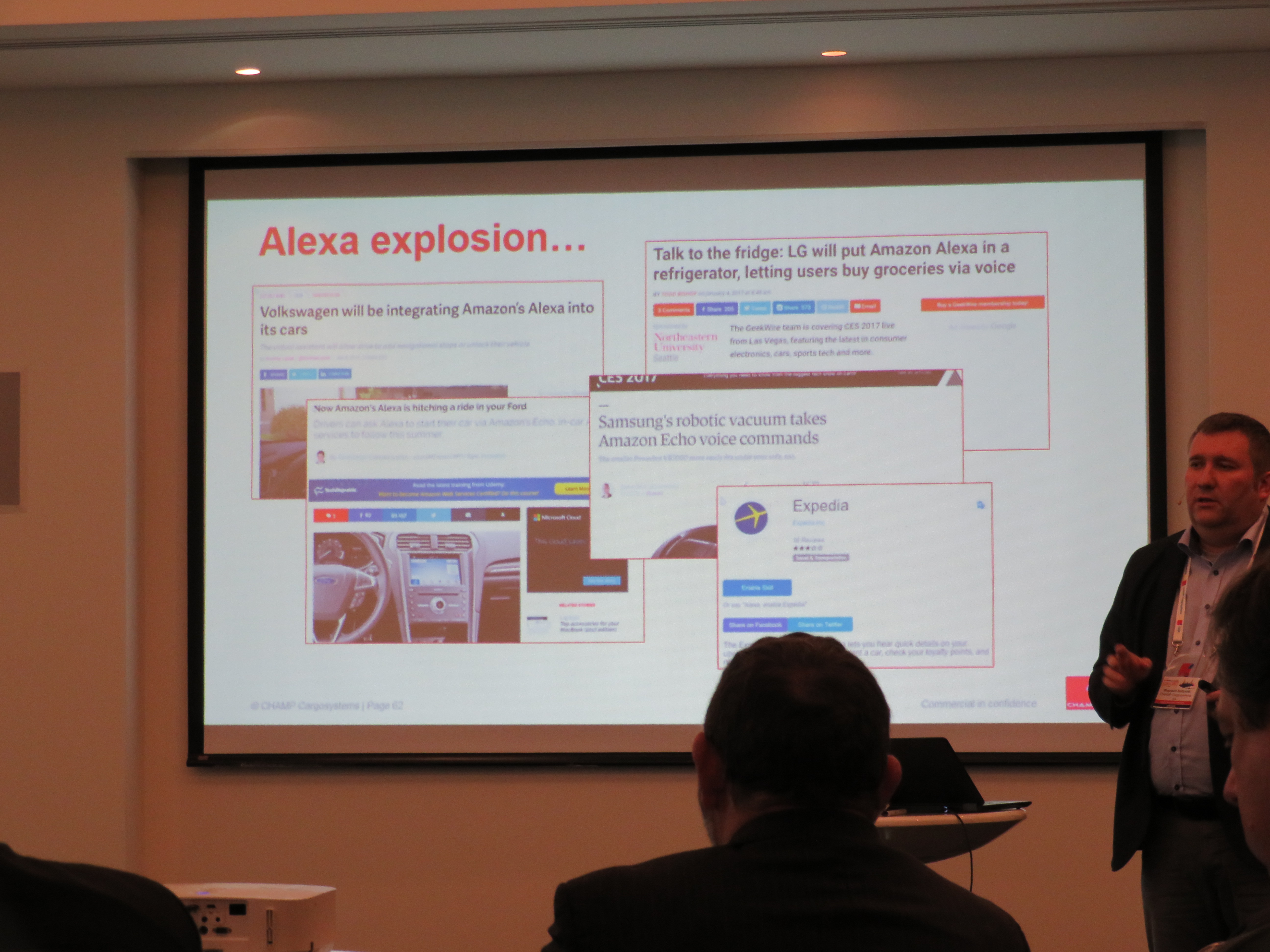 Fasten your cargo seatbelts, we’re heading for a digital tornado as the airfreight industry embraces technological change.
That was the clear message from the horizon innovation forum held in Abu Dhabi on the eve of the opening of today’s IATA World Cargo Symposium 2017 at the ADNEC exhibition and conference centre.
The forum, chaired by Celine Hourcade, head of cargo transformation at IATA, kicked off with some blue sky thinking from Svilen Rangelov, who described his plans to build a car-like drone project.
Rangelov, born in Bulgaria but with an economics degree from the US, asked the audience to excuse his bushy beard, which will be shaved off when his unmanned aircraft takes off or if it doesn’t, when he attends a job interview.
That initial presentation exemplified the key theme of the debate: what if…?
Hourcade pointed out that Amazon’s entry into overnight airfreight operations was little more than a theory just 12 months ago but had now become a reality, and she observed that the traditional airfreight industry “needs to move faster” not just in the transportation of physical goods but in its adoption of technology.
The debate was thrown open to the audience in a well-attended session, with the first contribution describing the air cargo industry as “a gigantic dinosaur” that was slow to react and overly complicated, with too many participants who are unwilling to share information.
Alas, the audience members were not asked to identify themselves, but given the exclusive nature of the event, they were at a senior level.
One audience member suggested that the integrators, once seen as the arch disruptors of traditional air cargo, were now themselves vulnerable because their production line logistics does not allow them to customise their service in this new world of e-commerce.
Protectionism and a reluctance to share data were two reasons behind the rise of the Amazons and Alibabas in the air cargo supply chain.
One audience member suggested that the automotive industry was one example of a global, fast-moving and complicated supply chain where data sharing was encouraged, to the benefit of the consumers, suppliers and manufacturers.
But innovation and entrepreneurship need courage and capital: “Our industry players want to wait and see who will invest in something new, and then they will follow,” was one observation.
The same speaker said that the “full force of digitisation” would confront an air cargo industry that was too focused on business to business relationships and had moved away from the consumer, a strategic error with the emergence of e-commerce and the combined “I want it now” demands of the end customer fuelled by the powerful and innovative e-tailers.
This thought was summed up by one person as: “Our industry has always been reactive rather than proactive, and so has always been late. We need to change that mindset.”
Another said that digitisation does not mean “digitising a legacy [paper] process” but adopting new ideas like blockchain, the peer to peer network with a distributed ledge of transactions.
The digital tornado warning came from Wojciech Soltysiak of air cargo IT systems provider CHAMP, who gave the now defunct DVD retailer Blockbuster as an example of a company management that had laughed out loud at the idea of Netflix, whose video streaming alternative destroyed the former’s business model.
Soltysiak said that in ten years, the traditional retail chains had seen total global sales of $250bn fall to $150bn, with the ‘missing’ $100bn now in the form of e-commerce, and growing.
And it is not just e-commerce, but robotics and smart machines in the supply chain: “The robots are now helping us but in two years we will be helping the robot,” said Soltysiak.
He observed that there are around 80,000 books available on how to manage people, and only ten on how to manage robots.
The best illustration of the potential of smart machines was Amazon’s Alexa, which was brought to the event.
Alexa was asked how old was Elvis Presley when he died. The answer, apparently, is 42. That was easy. Now try airfreight.
“Alexa, open cargo booking, I want to send 200kg in four pieces from Frankfurt to Atlanta”
Test yourself now. How long would it take you to answer that question from a shipper or forwarder?
It took Alexa less than 10 seconds to come with a flight choice of KLM, Cargolux and Lufthansa.
Ah, I hear you sighing, but what about the rate agreements I have with an airline, and the preferences of the shipper?
As Hourcade pointed out, Alexa possesses artificial intelligence and is “always learning” and can adapt to your preferences. It will learn what type of shipments you book and agreements you have with airlines or freight forwarders. It will not just provide a list of flights but a targeted list of options that fit you. Alexa is basic now but is learning.”
Cue the traditional Chinese proverb: “When the winds of change are blowing, some people build walls which other build windmills”.
I think we should be building windmills.