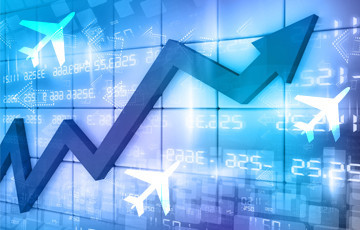 India’s booming air cargo market has registered a 13.5 per cent surge in outgoing volumes since 2011, although coupled with a “dismal yield” fall of 20 per cent in US$, says research house WorldACD.
The Netherlands-based consultancy, which uses primary data from the airlines themselves, said that India’s yield change looked a lot better in local currency Rupees, with a six per cent increase.
Incoming volume slipped slightly, but incoming yields fell considerably less than the worldwide average.
The UK, Germany and the UAE together take 25 per cent of all traffic from India, while Hong Kong, Germany and China account for around 40 per cent of all air cargo into India, states WorldACD.
The biggest growth sectors ex-India are live animal shipments (+243 per cent), perishables (+83 per cent) and pharmaceuticals (+67 per cent). Perishables boosted its share of the total from 12 per cent to 19 per cent, while pharma grew its share from six per cent to nine per cent.
“Whereas the bulk of the pharma goes to North America (Europe is second, Africa third), the best perishables and live animals destination is Middle East & South Asia (MESA). Incoming traffic shows similar growth figures for the three categories mentioned.
“Mumbai, Delhi and Chennai count for 70 per cent of India’s outgoing cargo. The fastest growing cities in general are Hyderabad and Kochi. Bangalore and Hyderabad show the highest growth in pharmaceuticals.”
According to WorldACD, Middle East airlines profit most from India’s growth, followed by airlines from Europe. Asia Pacific-based carriers are losing market share, particularly in the markets from India to Europe.
WorldACD says that forwarder sector shows “great volatility” in the Indian market.
“Among the large forwarders, growth figures of 40 per cent and above are just as normal as big declines in market share. Expeditors, Panalpina, GAC Logistics and Damco are growing fast, mostly at the expense of regional forwarders, but certainly also hurting a number of the world’s largest.”
Did you find this article of interest, if so why not register for a FREE digital subscription to Air Cargo News? – Find out more