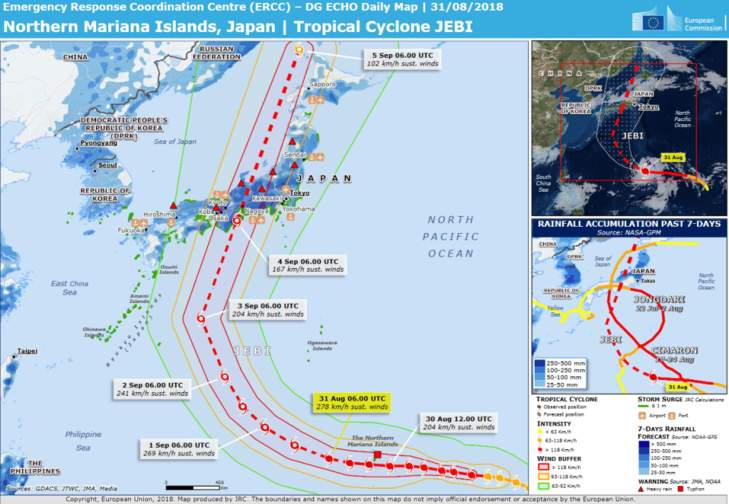 Osaka Kansai International Airport is expected to reopen to domestic flights on Friday (September 7) despite the severe damage caused by Typhoon Jebi earlier in the week , according to Japan’s Prime Minister Shinzo Abe.
At the height of the storm, the most severe to hit the region in a quarter of a century, Japan’s third busiest gateway had to be closed and access to the airport was restricted after a tanker ship collided with the main bridge between the island-built airport and the mainland, putting one carriageway out of action. One of the two runways was also flooded.
While progress with repairs has been faster than expected, no date has yet been given for resumption of international flights at Kansai. Local officials are reported as saying that it could take up to a week to repair the damage and fully reopen the gateway.
However, in the meantime Osaka Governor Ichiro Matsui has requested Osaka and Kobe to handle Kansai flights. Smaller local airports including Osaka Itami could also be opened to international flights.
In a statement, express carrier FedEx said that all transportation to and from Kansai International Airport has been suspended. It added that the Ports of Osaka and Kobe were also closed to shipping.
Air Canada Cargo had earlier warned that it was unable to accept shipments bound for or originating from Osaka Kansai “until further notice”.
Typhoon Jebi was not the only natural disaster to hit Japan. On September 5 an earthquake hit the northern island of Hokkaido, leading to the closure of Chitose airport.
Read more airline cargo news
Click here for a free digital subscription