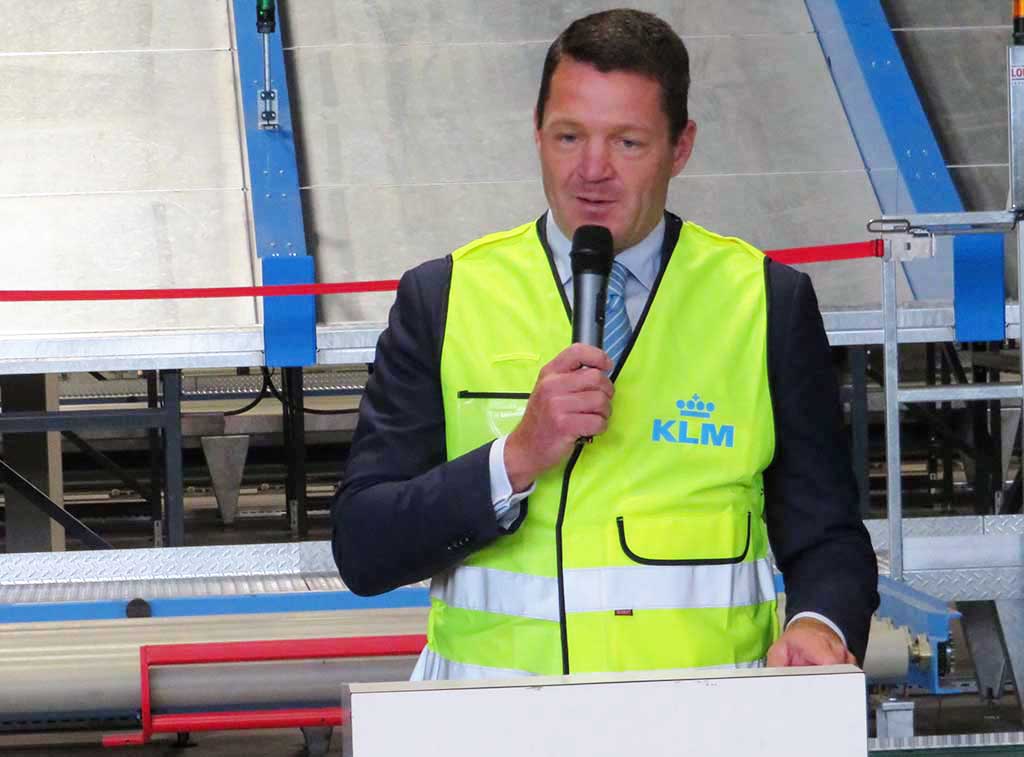 Cargo can often be the forgotten partner of its passenger counterpart, but not at KLM, where the Dutch airline’s president and chief executive, Pieter Elbers, is fully behind the freight division.
Elbers struck a high-profile when KLM-Martinair opened its new sort centre at Amsterdam’s Schiphol airport, a “tens of millions” euro investment which can handle mail, parcels and pharma products.
Standing alongside Air France-KLM Martinair’s cargo boss, Marcel de Nooijer, Elbers clearly wanted to recast the recent cargo cutbacks image of the Dutch partner in the Franco-Netherlands airline: “Today we start to invest in the future,” he said.
Added Elbers: “It is important to put our investments into a broader perspective. As KLM, three years ago, we were at a 1m [euro] per day investment level, but we have stepped up to 2m and are now approaching 3m.”
“We said three years ago that we were going to change the company and do two things: cut costs on one side and invest on the other.”
The investment saw Boeing 777 and 787 passenger aircraft – often described as mini-freighters ─ enter the fleet, alongside digitisation for the passenger side, but “also a lot of effort in cargo digitisation”.
Part of the restructuring process saw AF-KLM’s freighter fleet drastically reduced.
Elbers recognised this: “We had a few years of belt-tightening policies, reductions and restructuring. It was necessary that we should do it, but it went hand in hand with investment, and today you have seen part of that and it enables us to enter a new market segment.”
De Nooijer emphasised that point by saying that the carrier’s myCargo digital platform was used by 40% of its 35,000 global freight customers today, adding that digitisation allowed KLM to “tear down the silos and have a flawless data process”.
De Nooijer continued: “These building blocks are fundamental to drive that approach, and we see the initial results already kicking in because we feel in a much better shape than one or two years ago.”
The total cargo revenue of AF-KLM Martinair is around €2bn, of which the Dutch contribution is €1.1bn. The combined airline is airfreight’s fifth largest global carrier, with a market share of 4.5%.
The Dutch part of the airline accounts for 34% of tonnages at Schiphol, said de Nooijer, while the airport itself is a sizeable freighter hub, with maindeck capacity making up 60% of total annual freight throughput.
The Netherlands, with a population of 17m and the European Union’s 11th largest GDP, has a reputation for being the logistics entrepreneur of Europe, a tradition that Elbers is keen to retain.
“We want to maintain a relevant role. We have seen a gradual reduction of KLM and Martinair’s share of in the Dutch market and generally because of the reduction in freighters.
“You can do two things. You can sit in the corner and say it is terrible and we should have kept the freighters. Or you can say that this is the reality, we cannot have these freighters operating and we should concentrate on the market segments where we can make a difference and where we can make money.
“We have a unique network, with almost 200 destinations and with the facilities here we believe that we can compete.”
Again, it was unusual for the top airline boss to recognise the contribution of cargo to the passenger airline’s network and bottom line.
“These investments are more than just tens of millions, it is part of a bigger change in the company. With a network of our size in a country of our size, we need cargo.
“There is no way to run a network with 200 destinations, and 82 direct long haul destinations, without having cargo. This is nothing new and it is exactly why KLM used to be a strong player in cargo, and by making it even more strongly connected to the network’s development, it is really an important part.”
KLM Martinair has a three-pronged cargo strategy, based on its freighters (four Boeing 747-400Fs at KLM and two Boeing 777Fs at Air France), KLM’s nine Boeing 747-400 Combi aircraft (the last will leave the fleet in 2020) and its alliance partners, such freighter-operating China Southern.
Said Elbers: “After 2020, we will still have the freighters and we will still have our partners. The strength of KLM is the network, and if a customer calls us about a pharma shipment tomorrow to Lima, we can provide it.  And the day after, if they go to Shanghai, we can provide it.  And the day after that, if they go to Rio de Janeiro, and the day after that to Nairobi, we can provide it.”
Elbers added: “The relevance of maindeck is acknowledged, and that is why we will keep it as part of our portfolio, but we can also access it with partners such as China Southern, where we can be more flexible.”
Elbers was equally adamant when it was suggested that the B747-400Fs were elderly and ready for Nevada Desert, saying that discussion about the freighters “was not on the table”, while it was also pointed out that the aircraft, delivered new between 2003 and 2006, have a 25-30 year operational lifetime.
On the question of its cargo product portfolio, for de Nooijer, the three-six day e-commerce delivery segment should be a key focus for the airlines, leaving the one-three day product to the integrators and anything beyond six days to the postal services.
“It is that middle segment where no one yet has their act together yet, and that is exactly the segment where the airfreight industry has to zoom in, to shape new forms of selective partnerships and to also ensure that the first and last mile requirements are being met.”
KLM has also been working quietly on a European same-day product, with trial shipments in London, Madrid and Stockholm.
De Nooijer revealed little about the product, 12Send, which will have a full roll-out in September.
Read more cargo Airline news