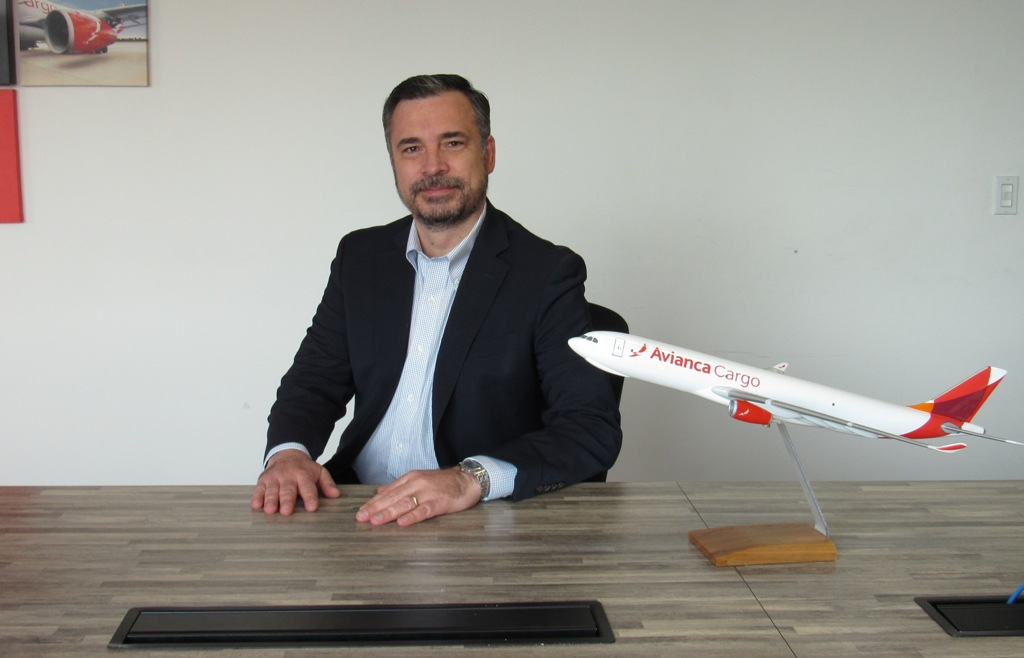 It is 25 years since Avianca Cargo general director Kurt Schosinsky first sold space on an aircraft, when he worked as an airfreight sales rep for DHL Global Forwarding — a company he worked at until earlier this year.

In the intervening years Schosinsky held several positions at the forwarding giant, including country manager for Colombia, Panama and the Caribbean, and managing director in Latin America for warehousing and distribution. He took up his current position at Avianca Cargo in February.

Schosinsky says that his background in forwarding gives him the advantage of understanding the market from the customers’ point of view.

“I have returned to airfreight, but from another perspective,” he tells Air Cargo News. “From my point of view, it is interesting because I understand very well what the customer of the airline needs and how we can improve the service and value proposition.”

Schosinsky joins Avianca Cargo at an interesting time — IATA statistics show that the Latin America region is one of only two to post a year-on-year demand increase over the first eight months of the year.

IATA stats show that cargo volumes at the region’s carriers are up by 1.2% during the January-August period, while the total market is down by 3.3%. The only other region to record growth is Africa.

However, this only tells half the story. Many countries in the region face ongoing political and economic uncertainty — even the normally stable Chile has seen protesters take to the streets of the capital this year to vent their frustration at inequality and the increased cost of living.

Also, Schosinsky says that the weak cargo market in other areas of the world has resulted in airlines moving capacity to the region to capitalise on the growth. This has led to lower cargo load factors at carriers across the region and has therefore put pressure on rates and revenues.

This trend is again reflected in IATA’s August figures: cargo capacity at airlines based in the region over the first eight months of the year has increased by 7%, while the average cargo load factor for the period is down by 2.5 percentage points to 35%.

“Due to the coverage and solutions that we provide to our customers, our volumes have increased a little bit, which means that we are not suffering this year in terms of demand,” he says.

“However, in terms of rates there is a little pressure because the number of airlines and [capacity] has grown as carriers have increased their presence in the region to try to recover volumes that they have lost in other markets.”

This claim is borne out by Avianca’s second-quarter performance — the ‘cargo and other’ business saw revenues for the period decrease by 11.8% to $182m, although other one- off factors played a major role in the revenue decrease.

Meanwhile, volumes for the period are stable compared with its 2018 performance.

Service focus
The airline has been busy developing services targeting specific sectors, such as perishables and pharmaceuticals, and that has helped protect Avianca Cargo from the effect of lower load factors.

“Volumes are doing well for us because our value proposition is that we connect Latin America like no one else, we are a regular line, we are a scheduled line, and we provide a very good on-time performance,” Schosinsky says.

“Our customers, for example, from the perishable sector, prefer this regular service to having lower rates because I understand they have had some issues when they have tried to experiment with other airlines. This is one of our key assets and strengths: consistency, on-time performance and a good service at origin and destination.”

PharmaCare is designed to transport pharmaceuticals that require passive packaging to maintain their temperature and it has specific procedures in line with IATA’s Temperature Control Regulations.

PharmaCoolCare also conforms to IATA regulations and is aimed at time and temperature sensitive pharmaceuticals that require transportation in active containers.

Finally, Pharma Must-Go is designed to transport pharmaceuticals that do not require temperature control but need to reach their final destination in the shortest time possible.

The carrier is also investing in its cool room facilities in Miami, Bogota and Medellin, Schosinsky says.

Other sectors the carrier is targeting include e-commerce, high value and live animals — Avianca Cargo recently moved close to 200 horses for the Pan American Games in Lima.

Schosinsky says that its e-commerce services are helped by its wide network in Latin America. Also, last-mile delivery firm Deprisa is part of the Avianca group.

E-commerce volumes, says Schosinsky, have the benefit of helping to improve southbound aircraft load factors, which is the weaker of the two directions.

“In terms of [e-commerce] solutions and developments, with our sister company Deprisa, we are investing in IT tools to provide real-time visibility to customers in terms of track and trace and the status of shipments,” he says.

“This information is key to the customers, so we are investing in tools to integrate not only the first mile, not only the airport-to-airport, but the last mile as well.”

Another area of development at the airline over the last couple of years has been its freighter network.

Earlier this year the carrier ended a four-year partnership with Etihad on flights to Europe as it decided to go it alone with a service between Bogotá and Brussels, via Miami.
Avianca Cargo feeds in perishable volumes from Peru and Ecuador to fill the aircraft.

The location of Brussels makes it easy to connect cargo to the flower auction in Amsterdam, the main operation and consolidation centre in the continent for the flower industry.

In the other direction, exports include general cargo, automotive parts and pharmaceuticals.

Today, the service operates twice per week on a rotation of Bogotá-San Juan-Brussels-Miami-Bogotá.

Schosinsky explains the reasons for adding a stop in Puerto Rico: “The pharma industry out of San Juan is very interesting. The change allows us to send products to Brussels, which is a pharma logistics centre in Europe.”

This is not the only change the carrier has made to its freighter network this year.

In July, Avianca Cargo added a twice-per-week service operating Miami-Santo Domingo-Bogotá and in October it started flying twice per week Bogotá-Dallas Fort Worth.

The service to the Dominican Republic was launched after a passenger operation to the country came to an end while there were a number of reasons for adding A330-200F flights to Dallas.

Schosinsky says: “Normally when you think of Dallas, you think of oil and gas and this is one of the sectors we are trying to support — Colombia, Ecuador and the south of Chile have companies in the oil and gas, and mining industries.

“In the northbound direction we connect the Latin American perishable business with another point in the US.

“Also, our services and the interline agreements we have from the US give us the opportunity to provide additional solutions to send products to Asia, for example, using Dallas.

“It gives us the opportunity to provide additional solutions to the customers not only through Miami — a normal entry and exit point out of the US for Latin America — but also Dallas.”

The northbound flights are expected to carry perishable cargo such as salmon and red fruits from Chile, flowers from Colombia, asparagus and mangoes from Peru and flowers and fruits from Ecuador.

Freighter fleet
In total, Avianca Cargo has access to 13 freighters: its own six A330-200Fs and seven operated by partner AeroUnion — five A300Fs and two B767Fs.

“In terms of new freighters, in the coming months we will keep our fleet stable because the market conditions are not the best at the moment,” he says.

“We have decided to delay making any decisions for the next six months and see how the market progresses.”

This is a reflection of the strategy of the wider Avianca group, which is having a tough time financially.

“The company has decided to change the business model a little bit,” Schosinsky says. “The new approach is to focus on profitable routes and on profitability in general rather than growth.”

During the second quarter, Avianca Holdings reported an adjusted loss of $122.5m. In response, the company has implemented its Avianca 2021 plan to improve operational efficiency, strengthen the company’s financial position and improve liquidity.

Schosinsky says that this change in approach has seen the passenger side of the business reduce services to certain locations. For instance, Avianca Peru has pulled out of most domestic markets.

However, the impact on cargo operations has been limited.

“In terms of the cargo perspective, the tonnage we use in these aircraft is limited and it did not really impact our connectivity or capacity.
“The widebody capacity remains stable and in some lanes we are creating additional frequencies, for example New York and an [unnamed] European destination will increase with one additional flight.”

While the partnership with Etihad has come to an end, a new tie-up with Emirates SkyCargo was announced earlier this year.

Schosinsky explains that the Emirates partnership utilised a B777F to fly shipments from Bogotá to Maastricht during the perishables peak season.

“Between January and April we used the Emirates’ flight to support the additional volumes that we could not support with our own aircraft,” he says.

Conversations with Emirates about running a similar operation next year are ongoing, he adds.

Overall, Schosinsky says has enjoyed his move from freight forwarding to a cargo airline.

“I made a decision [to leave DHL after almost 25 years] and I am very happy,” he says.

Etihad Aviation Group (EAG) has promoted Martin Drew to the role of managing director – cargo and logistics. Responsible for…

United Cargo has carried out five thousand cargo-only flights using passenger aircraft. The carrier has been operating the flights since…