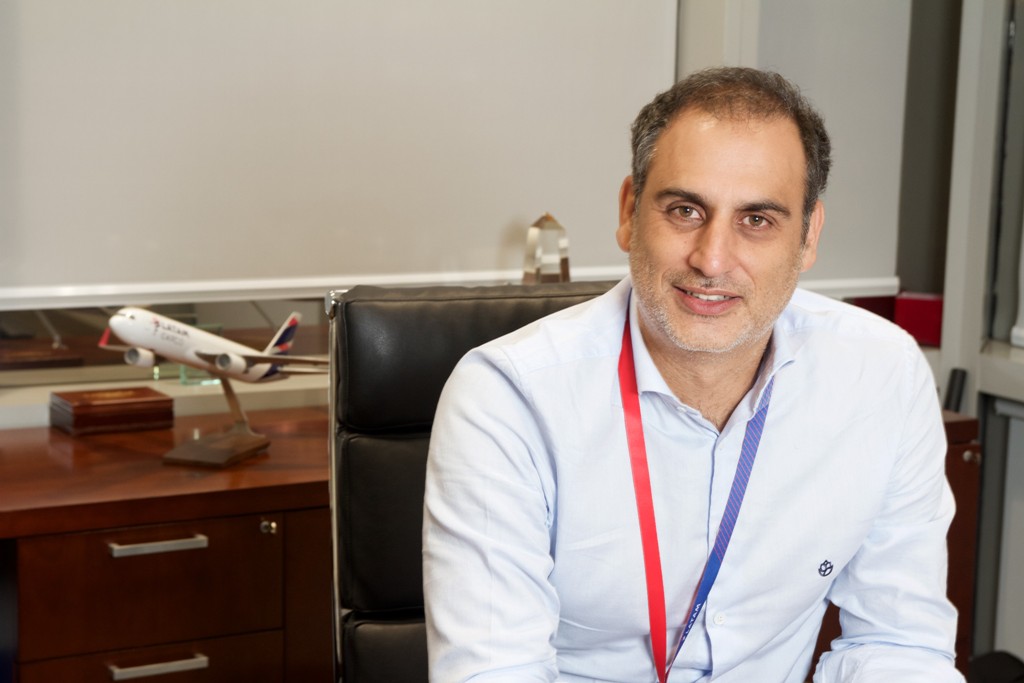 The challenge of ensuring aircraft are full of cargo is not an easy one to meet at the best of times, but when the market is in a downturn the task becomes even more difficult.

One person meeting this challenge head on is LATAM Cargo chief executive Andrés Bianchi, who was appointed to the top job just over two and a half years ago after stints in the finance, networks and commercial areas of the cargo business.

He outlines to Air Cargo News the steps the airline has taken to ensure its load factors are as high as possible on both northbound and southbound services.

Widebody capacity
Firstly, he says, the cargo division works closely with the passenger side of the business when network plans are formulated to ensure widebody capacity is deployed in order to maximise cargo loads.

“For example, we fly widebodies from Santiago to São Paulo anything between two to four times per day, or from Lima to São Paulo,” he says.

“Those aircraft are basically devoted to those routes because of cargo requests. It allows us to feed our belly capacity out of São Paulo into Europe and the US with a much better cargo contribution.

“That is something we are consistently getting better at.”

Its fleet of 11 Boeing 767 freighters also help to feed cargo into its main hubs for onward transportation in the bellyhold of passenger aircraft.

Bianchi explains that rather than fly back and forth between two airports on a rotation, freighters will cover more than one origin and hub on a loop to pick up and drop off as much feeder cargo as possible without the need to fly low-demand backhaul routes.

“By combining, we can do a much better job at building the cargo out of the exporting countries of South America without having to bring an extra plane back.”

Overall, Bianchi says the last 12 ﷯months have been a mixed bag in terms of demand, with perishable cargo heading northbound largely performing “fairly well”, while southbound imports have been “dismal”.

He says: “Salmon is okay, flowers are okay but asparagus, which used to be pretty significant, is not doing that well because there have been trials of surface transport, although the results of this are still a bit unclear.

“On the other hand the import markets are dismal when you look at data from sources like [analysts] WorldACD or Seabury.

“The decline in revenues on the import side is among the most dramatic in the world, especially on some specific lanes in which, because we are still a good export market, carriers are flying more and then lowering the rate in order to get more tonnage on the way down.

“That is generating an imbalance, it is generating a lot of issues within the region in terms of how you deploy capacity and how you leverage your network to carry as much northbound volumes as possible without having to incur the cost of bringing freighters down.”

Divergent picture
Looking at how LATAM Cargo is performing in terms of volumes and revenues paints a divergent picture, as income has been hit much harder than cargo demand.

Over the first three quarters of last year, the latest figures available, the cargo business saw revenues decline by 10.3% year on year to $784m, while cargo volumes were down by the lower amount of 3.5% to 660,000 tons.

Bianchi points out that the figures are complicated﷯ by the sale of its Mexican subsidiary Mas Air Cargo at the end of 2018.

“Having said that there is no denying that especially on the yield side there has been pressure,” he says.

“There haven’t been sizeable capacity adjustments into South America in the last year, despite the fact that demand has fallen by a double-digit amount and as a result yields have come under pressure.

“Add to that, the mix between inbound cargo and outbound cargo has shifted in favour of export cargo, which has lower yields [also affecting year-on-year comparisons].

“However, if you look at the revenue tonne km (RTK) count and how the market has shifted in terms of demand, what is hidden in those figures is that we have been making market share gains in several markets in the region because our RTKs have fallen by less than the fall of tonnage in the region.”

Another major development at the airline over recent years has been its decision to offload its B777Fs in favour of a dedicated fleet of B767Fs.

Until 2016, the airline operated four B777F﷯ aircraft, but 24 months later they had all left the fleet.

Looking back, Bianchi says it was the right decision to make because demand on the inbound side had﷯ been falling consistently, which would make it hard to fill freighters with a capacity of around 100 tonnes.

Bianchi explains: “With the B767Fs we can better match supply and demand and that allows us to provide a more frequent service.

“We can double frequencies if we need to, or we can move them back quickly to do feeder operations.

“The decision to phase out the B777Fs in light of the current market situation has proved to be very beneficial.”

Efficiencies have also been gained by operating a single freighter type, he says.

Looking to the future of the LATAM Cargo fleet, Bianchi says it has just taken delivery of the last of a series of three conversions it had on order.

The latest aircraft will be operated by LATAM Cargo Colombia and will replace an aircraft the group had on lease through an ACMI deal.

He says the carrier is currently evaluating whether or not it will convert more of LATAM’s “significant” fleet of B767-300ERs, which make good feedstock for conversion.

“They have the right specification for conversion so we can pull them as they become available — we get the option to use them for our operation and if not, they are sold.”

Conservative plans
On new cargo services, Bianchi says the carrier is being “conservative” in its plans for the coming year as it adjusts to market realities.

“We can benefit from the fact that the B767 is pretty adaptable so if we see a pick-up in demand, we can probably, within two weeks, activate extra long-haul frequencies.”

LATAM Cargo recently added a new service between Miami and Lima, which replaced a previous B777F operation that had been dropped when the aircraft type exited the fleet.

The carrier had continued to cover the route in the northbound direction, but it was decided that now was the right time to also offer capacity heading south.

Elsewhere, the airline has been investing in its perishable and pharma operations. It has embarked on gaining IATA CEIV certification at facilities across its network while ﷯also expanding its cooler facility at Guarulhos.

More than 45% of LATAM Cargo’s volumes are perishable shipments and currently 14% of these shipments — more than 24,000 tons — transit through Guarulhos. Salmon, fruit and asparagus are the most transported perishables.

The facility will include two areas: one storage cooler of 485 sq m set at 0-2 degrees Celsius and the second will measure 340 sq m offering temperatures of 2-12 degrees Celsius for storage and re-palletising purposes.

The larger facility will allow the carrier to increase the amount of transit cargo it can handle and process through São Paulo.

The cooler will be able to hold the capacity of eight widebody passenger aircraft, Bianchi says.

As with most airlines, LATAM Cargo is also investing in its digital capabilities.

“We have been working over the last year and a half on completely overhauling our systems infrastructure,” he says.

“We are going to cut over from more than 15 different systems that we currently have working together into a new system [Wipros’ Croamis].

“We should be cutting over to that system within the second half of 2020 and it will significantly augment our IT capabilities, allowing us to do more digital implementations with our customers, improve efficiency and also enable us to use data in a much more effective fashion.”

Another area of development for LATAM Cargo is the expansion of its alliance arrangements.

News broke in September that Delta intends to acquire 20% of LATAM for $1.9bn.

LATAM says its affiliates in Peru, Colombia and Ecuador have signed codeshare deals with Delta that will allow connections between those countries and the US, starting in the first quarter of 2020.

“Since cargo is important to LATAM we are always part of the conversations with our partners and cargo participates actively in the process,” Bianchi explains.

“The agreement that we recently announced with Delta, which is in the process of going through all the regulatory approvals includes a cargo chapter which should be interesting to both airlines — once approvals are in place — in terms of developing new routings together, improving efficiency and enhancing the products that we offer the customers.”

The airline is also waiting for approvals for a partnership with the IAG Group.﷯ Qatar Airways is a shareholder and it has partnerships with Air China and Cathay Pacific for the onward transportation of cargo flown on its Santiago-Chicago service.

To conclude, Bianchi says he enjoys the cargo side of the airline business.

“Things change very quickly in cargo so there is not a dull day at the office: you are always having to look at the economic balance, trying to anticipate how demand is going to behave, what your competitors are going to do.

“On the passenger side, and in other businesses, you have longer lead times so you can plan better.

“In this particular business you have to work every day to try to understand what is going to happen and then react and that makes it attractive.

“We face the challenges of modifying our fleet, making sure that this company is better prepared for the digital age with a new system, offering products that match what people want and that we can deliver. These have been very interesting experiences.

“The opportunity to see how we can integrate with other carriers to generate better products without having to deploy additional assets is one of the challenges for the future of the industry and we are going to be right in the middle of it with our alliances.”