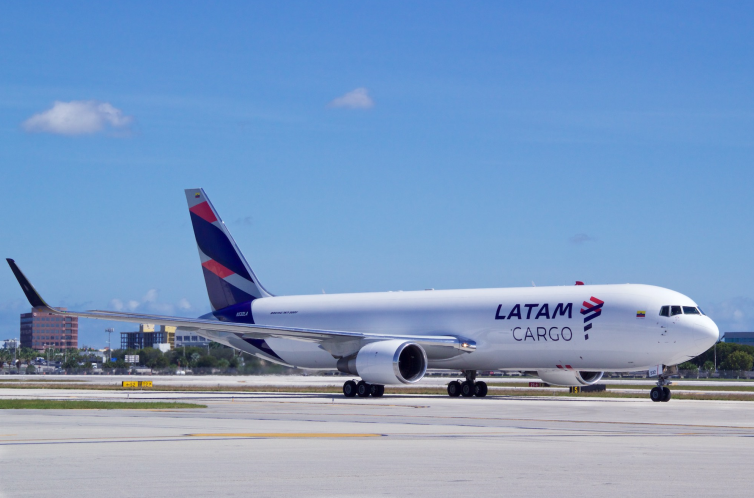 Latam Airlines Cargo will add an extra two freighter conversions to its cargo fleet expansion plan, as it looks to meet growing demand between North and South America.

The Santiago-headquartered airline group announced in March that it would convert eight B767-300 aircraft into freighters, but it yesterday announced the addition of two more of the aircraft to the plans.

This means that by 2023, the Latam Group will operate a fleet of 21 B767 freighters, which will almost double the size of the existing fleet of 11 cargo aircraft and reduce the average age from 17 years to 14 years.

“In general terms, the majority of the plan focuses on improving connectivity between North and South America,” Hadad said.

“In particular, capacity from Colombia and Ecuador will be strengthened to support the flower export industry. Additional flights to support Chilean salmon exports as well as import traffic into the country will also be reinforced.

“Capacity to and from Brazil will also go up as we add routes from North America and Europe, boosting both the export and import markets.”

Hadad added that at this stage it had yet to be decided whether the two extra freighters will be used to replace or expand the fleet.

“For example, the two additional conversions could be used to refresh the current fleet or to begin new growth projects. The Group still has time to make the relevant decisions.”

Latam Cargo chief executive Andrés Bianchi added: “The decision to expand our fleet is based on the attractive growth opportunities available, recent efficiency improvements and flexibility that the Boeing 767F  freighter offers.

“Thanks to these elements we believe we will grow profitably, even if facing conditions similar to those that we faced before the pandemic. This expansion will allow Latam’s cargo subsidiaries to continue responding to our customers’ needs and supporting the region’s economic growth through increased and improved connectivity.”

Latamalso announced that it will use some of the 767-300ERs that are awaiting conversion under a hybrid format to benefit customers in the short term.

The seats will be completely removed from three planes for this purpose in order to have a payload of up to 46 tons per flight. Two of these planes are already operational. The third one is expected to be available in the second quarter of 2021.

Furthermore, Latam is optimising commonality across their fleet of 767-300 production and converted freighters to maximize capacity, including the ability to transport delicate goods.

It was also announced yesterday that Latam Cargo has partnered with SkyCell to use its pharma containers.

The boxes will be used across countries in South America, including, but not limited to, Brazil, Argentina, and Chile.

“The collaboration will expand Latam Cargo Group’s pharma services and will ensure the delivery of medicines and vaccines to patients in a safe, secure and sustainable way,” SkyCell said.