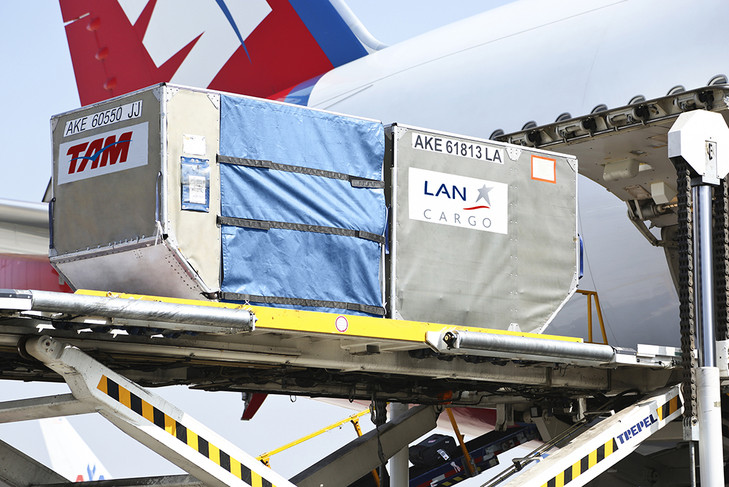 LATAM recorded declines in air cargo revenues and volumes during the second quarter as it faced difficult economic conditions in South America.
The newly rebranded airline group saw second-quarter cargo revenues decline by 21.3% to $334m compared with a year earlier as a result of a 12.5% decline in traffic to 919m revenue ton km (RTK).
Yield based on RTK was down to 21.95 cents against 23.22 during the same period last year.

“During the quarter, cargo traffic was impacted by an eight day strike at the Customs Office in Santiago, which stopped cargo traffic in Chile during this period,” it said.
“Additionally, cargo demand remained weak, especially in the Brazilian domestic and international market.
“Pressures on cargo yields continued during the quarter, mainly as a result of the competitive scenario, the depreciation of local currencies, mainly the Brazilian Real and the Euro, and a lower cargo fuel surcharge related to the drop in fuel prices.
“As a result, cargo revenues per available ton km (ATK) of the second quarter declined 20.2% as compared to the same quarter of the previous year.”

To help offset the decline in traffic, the airline reduced capacity during the period by 1.2% against last year to 1.7bn ATK. This decline includes a 7.1% reduction in freighter capacity.
At the end of last year, the group announced plans to lease out three Boeing 767-300 freighters as a strategy to maximise belly capacity in the passenger fleet begins to bite.
The three 767-300Fs – the group has nine such freighters – are bound for “another company operating in a different market for a period of three years”, which indicates that the aircraft are being placed outside Latin America.
The capacity reduction was not enough to offset demand declines and as a result load factor slipped to 52.8% compared with 59.5% during the second quarter of 2014.

It was also a difficult quarter for the overall airline group as revenues declined by 20.8% to $2.4bn and although net income improved, it still recorded a loss of $49.7m.
The revenue results reflected the weak macroeconomic conditions in Brazil and significant devaluations of Latin American currencies.
Profits benefitted from the company’s cost saving plan and a 34.3% reduction in fuel costs.