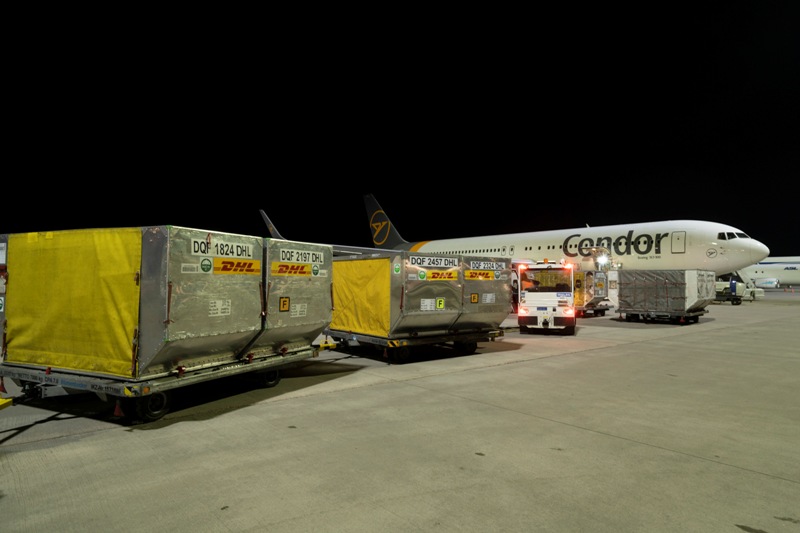 German holiday travel airline Condor will fly four of its Boeing 767s on behalf of DHL Express utilising belly capacity. The first cargo flights under the partnership took off this week.

The Condor planes will be based at DHL Express’ largest European hub in Leipzig and will transport shipments along three routes – to Shannon, Ireland, Milan-Malpensa in Italy, and Cologne, Germany.

These flights would also be available to transport Covid-19 vaccines. The partnership will initially extend until the end of May.

Schmitt continued: “The partnership also demonstrates Condor’s ability to adjust to unusual situations and, in this case, to work together with DHL to make an important contribution to maintaining international supply chains.”

Markus Otto, senior vice president aviation Europe at DHL Express, said: “This partnership between cargo and passenger carriers is unique,” adding: “It allows us to react even faster and more flexibly to the continued high demand for international express service.

“The additional capacity through Condor allows us to further improve service quality and transit times, and maintain our growth trajectory.”

Since April of last year, Condor has devoted an increasing number of flights to cargo, primarily transporting medical protective equipment – including millions of face masks, protective suits and gloves – in addition to e-commerce goods.

In the process, a portion of Condor’s Boeing 767 fleet has been converted to pure cargo aircraft. For a period, 14 of Condor’s 16 Boeing 767 aircraft were being used solely for cargo.

Condor has also trained and deployed a team of cargo supervisors to oversee cargo operations and ensure quality execution.

For Deutsche Post DHL Group’s Express division, the partnership is part of a programme of action measures to expand capacity in the face of growing express volumes worldwide and maintain the company’s growth trajectory.