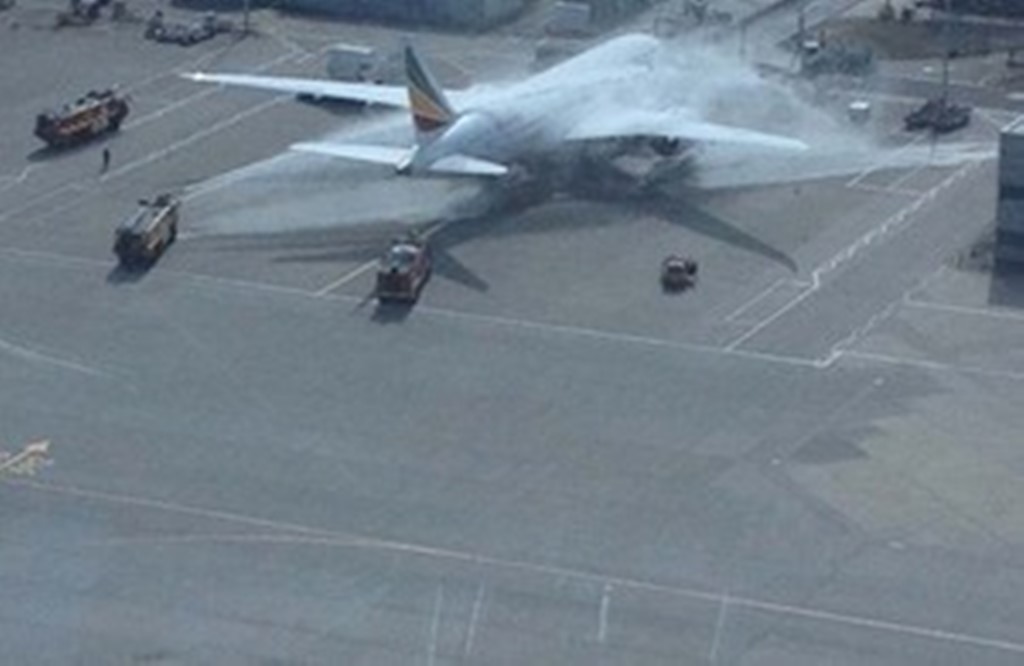 A fire onboard a parked Ethiopian Airlines Boeing 787-8 in July 2013 at Heathrow was likely to have been caused by a lithium battery powered emergency locator transmitter (ELT), according to accident investigators.
The UK’s Air Accidents Investigation Branch (AAIB) said ELT battery wires, crossed and trapped under the battery compartment cover-plate and probably created a short-circuit current path which resulted in a rapid, uncontrolled discharge of the battery.
“Neither the cell-level nor battery-level safety features prevented this single-cell failure, which propagated to adjacent cells, resulting in a cascading thermal runaway, rupture of the cells and consequent release of smoke, fire and flammable electrolyte,” it said.
The fire spread through the cabin and burnt the fuselage. No one was onboard the aircraft at the time of the fire.
Fourteen Safety Recommendations have been made during the course of the investigation. In addition the ELT manufacturer, Honeywell, carried out several safety actions and is redesigning the ELT unit taking into account the findings of this investigation.
Boeing and the US Federal Aviation Administration have also undertaken safety actions.
The full-report and recommendations can be accessed here: AAR 2/2015 – Boeing B787-8, ET-AOP.
Last month, Boeing advised passenger airline customers not to carry large quantities of lithium-ion batteries as bellyhold cargo until improved packaging is in place.
The guidance, sent to airlines around the globe by Boeing, urged that they not carry the batteries as cargo "until safer methods of packaging and transport are established and implemented."
Fires in consignments of lithium batteries have been implicated in the loss of three aircraft over the last 10 years.