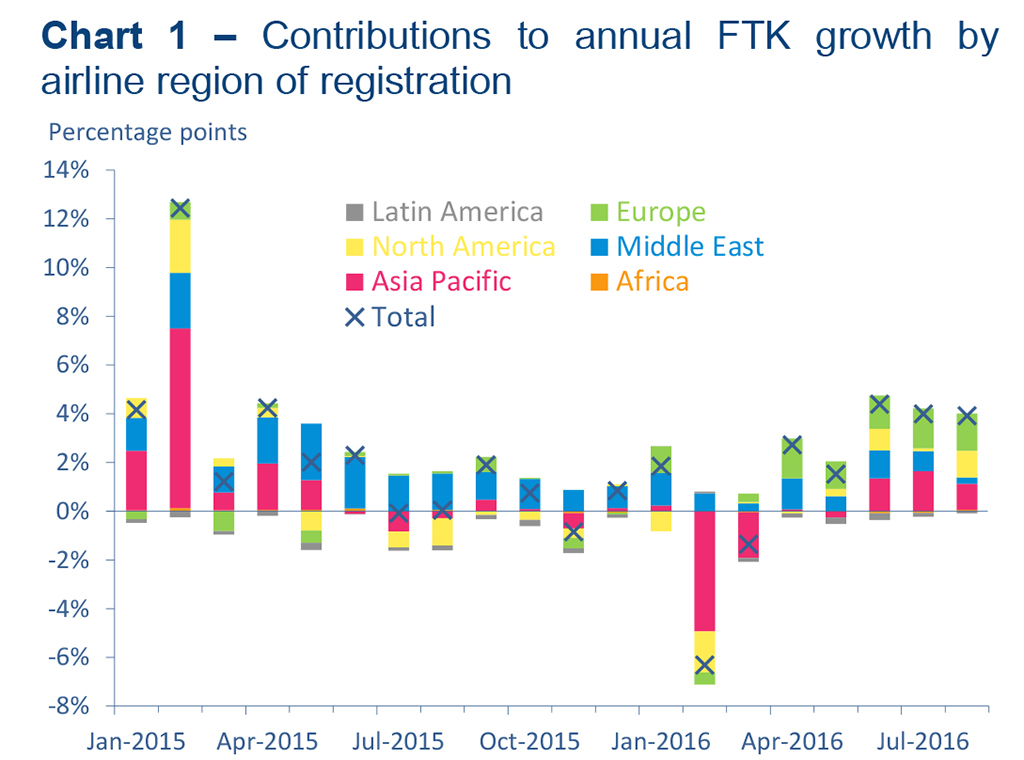 Global freight tonne kilometres (FTKs) rose 3.9% year-on-year in August but available FTKs rose even faster, by 4.1%, leading to historically low load factors and keeping yields under pressure, said IATA in its latest report.
Industry conditions have improved since the particularly soft patch at the start of the year said IATA. Carriers in all regions except Latin America reported an increase in year-on-year demand in August although regional results varied considerably.
For the third time in four months, airlines based in Europe posted the highest collective annual growth while those in the Middle East experienced their slowest growth in more than seven years.
European capacity increased 4.7%, in line with an increase in reported new export orders in Germany over the last few months. “European freight demand has now broken out of the corridor that it occupied between mid-2010 and the start of the year,” said IATA.
Middle Eastern carriers’ air freight demand growth slumped to 1.8% year-on-year in August 2016, the slowest since July 2009 while capacity surged by 6.9%, bringing the strong upward trend of the past year to a halt. In seasonally-adjusted terms, volumes in July 2016 were slightly below those seen in January 2016.
The weakening performance is partly attributable to slower growth between the Middle East and Asia, suggesting that the region’s carriers are facing stiff competition from European airlines on the Europe-Asia route.
IATA director general and chief executive, Alexandre de Juniac, took a very cautious line. He said: "August numbers showed improvements in cargo demand. While this is good news, the underlying market conditions make it difficult to have long-term optimism. World trade volumes fell by 1.1% in July with no improvement on the horizon.”
Current global political rhetoric is often focused on protectionism rather than trade promotion, he noted, saying: “Economies need to grow out of the current economic doldrums. Governments should be focused on promoting trade, not raising protectionist barriers."
Asia-Pacific airlines reported a 2.8% increase in demand for air cargo in August while capacity in the region expanded by only 1.2%. International traffic was the strongest of the ‘big-four’ markets (Asia Pacific, Europe, North America, and Middle East) so far this year, with traffic up by 6.5% year-on-year in July 2016.
North American carriers saw freight volumes expand 5.5% year-on-year in August 2016, while capacity increased by 3.7%. International freight volumes grew by 4.6% in August – the fastest since the US west coast seaports strike in 2015. However, seasonally adjusted activity has barely altered from 2008 and the strength of the US dollar is keeping the US export market under pressure.
Latin American airlines saw demand contract for the sixth consecutive month with FTKs in August falling by 3.3% compared to the same period last year, while capacity decreased by 0.2%. The region continues to be blighted by weak economic and political conditions, particularly in the largest economy, Brazil.
African carriers’ demand rebounded sharply in August to 3.7% – the fastest rate in 12 months. Despite this, freight capacity continues to outstrip demand, due to rapid long-haul expansion, which led to a 29.2% year on year surge, significantly affecting load factors. In August 2016 it was almost six percentage points lower than a year ago and is around half the industry average.