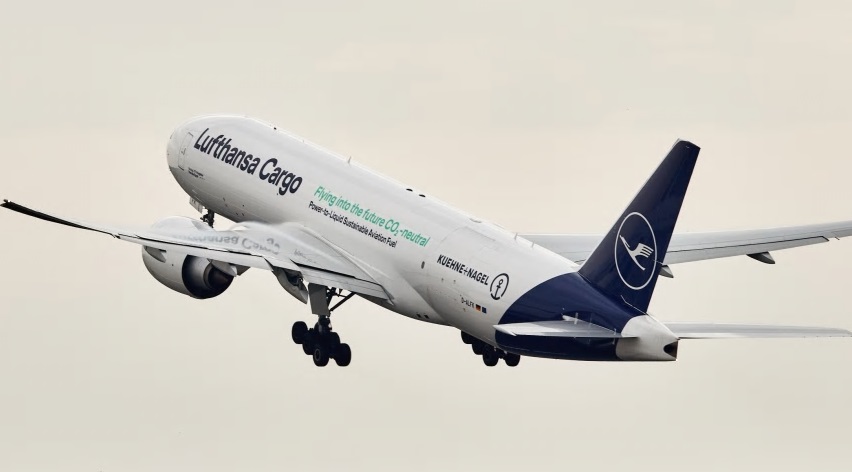 Kuehne+Nagel and Lufthansa Cargo are continuing to promote the use of power-to-liquid (PTL) synthetic sustainable aviation fuel (SAF).

On April 14, a Lufthansa Cargo B777 freighter (registration D-ALFK) flew from Frankfurt, Germany to Seoul, South Korea with new livery that reads “Flying into the Future CO2-neutral” and “Power-to-Liquid Sustainable Aviation Fuel”.

The logistics company and the cargo airline are promoting PTL synthetic SAF in order to advance the decarbonisation of airfreight and launched a partnership to achieve this last year.

Kuehne+Nagel and Lufthansa Cargo have jointly committed to supporting the world’s first production site for synthetic crude oil in Werlte/Emsland in Germany by purchasing the equivalent of 20 metric tons, or 25,000 litres, annually.

The synthetic fuel based on this is considered the fuel of the future, which is expected to further reduce the CO2 footprint of aircraft engines in the future. The production site in Werlte is operated by the Bonn-based NGO atmosfair. The first quantities of crude oil are to be produced this year and used as synthetic fuel in aviation.

Dorothea von Boxberg, chief executive officer at Lufthansa Cargo, said: “We are very pleased to now also visibly express our joint commitment and to publicise it with the help of the global deployment of our freighter. A successful and sustainable transformation of airfreight can only succeed if we join forces with strong partners – which is why we are very proud to have Kuehne+Nagel at our side as a supporter of this forward-looking technology.”

Yngve Ruud, member of the management board of Kuehne+Nagel, responsible for air logistics, added: “With the new Boeing 777 freighter D-ALFK in Kuehne+Nagel’s livery, we are sending a strong signal our company’s commitment to sustainable airfreight. We are already seeing a great deal of interest from our customers who want to avoid the carbon emissions of their shipments worldwide and the synthetic SAF project with Lufthansa Cargo is of utmost importance for our joint mission of CO2-neutral aviation.”

CO2-neutral fuels or SAF can be produced in various ways. To date, Lufthansa Cargo and Kuhne+Nagel have used SAF of biogenic origin, i.e. synthetic kerosene based on used cooking oils, for example.

In the case of synthetic kerosene, which is also known as PTL fuel, the synthetic crude oil is produced from regeneratively generated electricity, water and CO2, said Lufthansa Cargo. Because of this process, PTL-based aviation fuel is considered CO2-neutral. The power-based fuels are currently still in the development stage towards industrial production, but are already considered a long-term alternative to conventional kerosene or biogenic SAF, as they are theoretically to be produced without availability limits.

Other companies in the airfreight industry are also backing SAF. In February, DHL Global Forwarding and Air France KLM Martinair Cargo (AFKLMP) teamed up on the purchase of 33m litres of SAF, while the month before Delta Cargo launched a SAF programme.