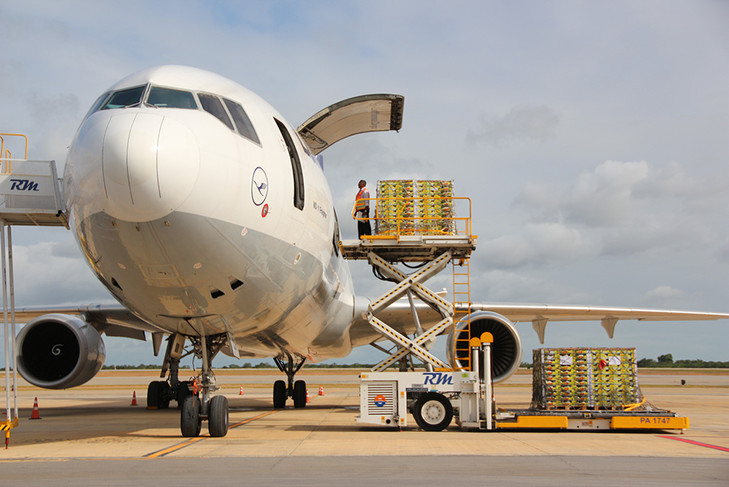 Lufthansa’s air cargo and logistics division sank to an operating loss in the first half of the year despite lower fuel prices and an increase in revenues.
The logistics segment, which includes Lufthansa Cargo, Jettainer and its share of AeroLogic, saw first-half revenues increase by 4% on last year to €1.2bn on the back of exchange rate movements.
However, first-half earnings before interest and tax (ebit) slipped to a loss of €16m from a €45m profit last year as a result of increased impairment costs.
This is largely related to the decision to delay the construction of a new freight centre in at Frankfurt airport for at least two years, which had a net effect of €65m.
“Given the limit imposed on capital expenditure, a decision was taken to postpone the possible construction project for at least two years,” Lufthansa said.
“This decision reduced the value of the investments that had already been made.”
Adjusted ebit was put at a €50m profit which was an increase on last year.
Operating expenses were up on a year earlier to €1.3bn, with the main development being a negative impact of exchange rates and a 25.6% reduction in fuel costs to €166m.
Demand during the period decreased by 0.4% on a year earlier to 4.1bn cargo tonne kms (RTK), while capacity increased by 3.2% to 6.1bn available tonne kms (ATK).
This capacity increase was caused by a 6.8% increase in belly capacity, while freighter capacity was drawn down by 0.3%.
The net effect of these alterations was that load factors slipped to 67.6% from 70.1% in 2014.
“Demand on global airfreight markets picked up in the first quarter of 2015, but lost momentum in the second quarter,” it said.
“Competition on global airfreight markets remains intense. Airlines from the Middle East and Turkey especially are increasing their freight capacities, particularly due to their many new passenger aircraft.”
Looking at regional demand, the Americas and Africa/Middle East were the only two regions to record increases, growing by 1.9% to 1.9bn RTK and 2.9% to 320m RTK, while European demand slid by 2.5% to 161m RTK and Asia Pacific slipped 3.2% to 1.8bn RTK.
But capacity additions in all regions outstripped demand increases, meaning load factors were down in all regions: Europe down 1.8 points to 48.6%, America down 1.5 points to 67.2%, Asia Pacific slid 4.2 points to 74% and the Africa/Middle East declined by 0.4 points to 54.6%.
“Growth on North Atlantic routes was mainly generated by increasing freighter capacities,” the airline said.
“Strong growth in freight capacities of passenger aircraft on South Atlantic routes was offset by a reduction in freighter capacities.
“[For Africa/Middle East] seasonal business from North Africa was the main driver and various extra flights were operated to meet demand.”
The overall Lufthansa Group recorded an 8.5% increase in first-half revenues to €15.3bn, while ebit more than doubled to €463m and it turned last year’s net loss into a €954m profit.
It said the improved revenue figures were down to exchange rate gains and improved traffic.