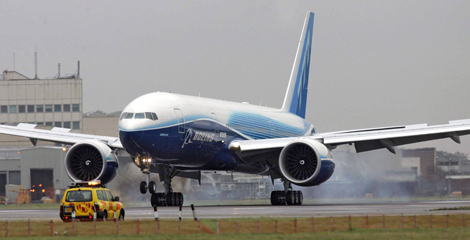 NO wreckage has been found in the search for the Malaysia Airlines’ B777-200 with 239 people on board, which went missing en route from Kuala Lumpur to Beijing, reports say.
Hishammuddin Hussein, Malaysia’s Minister of Transport, has suggested the aircraft may have tried to turn back.
An international air and sea search, which began in waters between Malaysia and Vietnam, has now been widened, he has revealed at a press conference.
Flight MH370, which disappeared at 02:40 local time on Saturday (18:40 GMT on Friday) after leaving Kuala Lumpur, was scheduled to land in Beijing at 06:30 (22:30 GMT). It has been missing for more than 42 hours.
The missing jet had 227 passengers on board – 153 from China – and two children. The 12 crew members are all Malaysian.
Reports say the US Navy’s Seventh Fleet has joined the multinational search team. A Vietnamese search ‘plane reportedly saw two oil slicks south of Vietnam.
Forty ships and 22 aircraft currently now involved in the search.
Ahmad Jauhari Yahya, chief executive officer of Malaysia Airlines, states: "The airline continues to work with the authorities and we appreciate the help we are receiving from all parties during this critical and difficult time."
Share this story