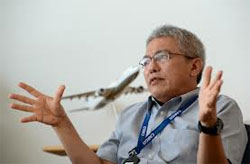 MASKARGO boss Mohd Yunus Idris has resigned as the company’s chief executive officer.
Unconfirmed local press reports suggest that poor ground handling standards and complaints from forwarders may have triggered the resignation, but a spokesperson for MASKargo said: "His decision to leave has nothing to do with what was reported".
The country’s Sun Daily says that the development could signal a change in the top management of the cargo division which has been “plagued with vendor issues and stiff competition”, newspaper sources say.
In a statement, Malaysia Airlines Group chief executive Ahmad Jauhari Yahya, said: “Yunus was able to lead his team at MASkargo to weather the tough cargo industry and its challenging market conditions where demand for cargo movement is greatly affected by economic growth of countries and continents.
“Yunus accomplished much in his 30 year tenure with Malaysia Airlines Group.”
Mohd Yunus is a 30-year veteran of Malaysia Airlines group. He was made acting chief executive of MASkargo in November 2011, and was officially announced as MASkargo chief executive in August 2012.
The development comes after the Air Freight Forwarders Association Malaysia (Afam) wrote to Malaysia Airlines’ chief executive Ahmad Jauhari Yahya lamenting service levels at the cargo division’s Advanced Cargo Centre (ACC) at Sepang.
Service standards have not been good since a manpower transition took place at the end of last year, forwarders claim.
Service levels have been greatly affected by a no-show of the new staff of the newly-appointed vendors, resulting in a shortage of manpower.
"MASKargo must admit their shortcomings in the selection of the vendors and be gracious enough to conduct a review of their performance," a forwarders’ statement urges.
MASKargo, described as formerly “a highly profitable subsidiary”, has suffered losses in recent years as a result of stiff competition putting pressure on yields.
In the first quarter, ended March 31, the division made a net loss of US$15 million compared to a net loss of $15.5 million for the same period in 2013.
This was on lower revenue of $136 million for the period compared with $140 million a year ago.

Lufthansa Cargo and DB Schenker have teamed up to carry out the first ever CO2-neutral freighter flights, powered by sustainable…