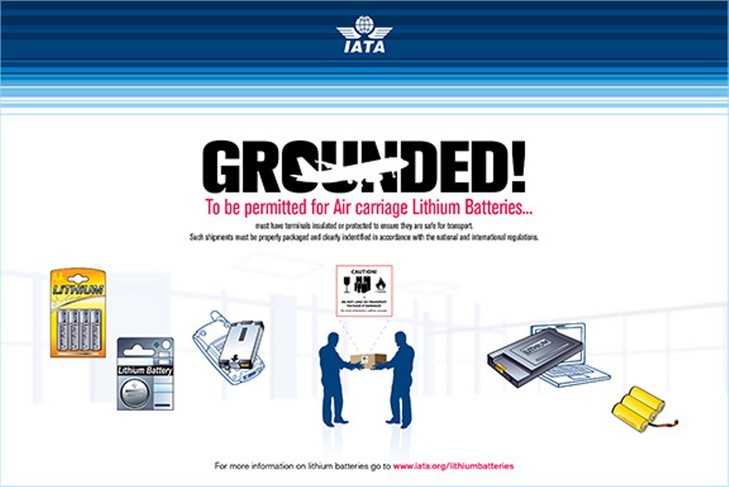 A US pilot association has welcomed moves to introduce a temporary ban on the transport of lithium batteries on passenger aircraft but said this won’t resolve risks for air cargo freighters.
The Air Line Pilots Association International (ALPA) has welcomed the International Civil Aviation Organization’s (ICAO) Air Navigation Commission’s work in "recommending a ban on lithium-ion battery shipments on passenger airliners until adequate safety regulations are in place".
However, the proposed ban is far from adoption and the Air Navigation Commission’s recommendation will now be considered by the ICAO Council in late February.

Almost all passenger airlines in the US had already voluntarily banned the shipment of lithium batteries, ALPA said.

It added that the action did nothing to improve the safety of lithium battery shipment on cargo aircraft.

“We’ve already lost at least one flight crew and two aircraft as a result of lithium battery fires. We can’t afford to wait any longer.”

“ALPA has long advocated for the expedited development of packaging standards that would help protect the aircraft and all on board from the effects of a lithium battery fire.

“As the international community moves forward on developing a long-term plan that allows for the safe transport of lithium batteries, we urge the Department of Transportation to recognize ICAO’s recent work and further safeguard air transportation by fully regulating all shipments of lithium batteries as dangerous goods and expanding the temporary ban to include all US domestic air shipments on passenger and cargo airlines.

“It is critical to ensure maximum protection for all passengers, crews, and cargo,” added Canoll.

While the pilot’s association is in favour of a complete ban while requirements are developed, shippers have been opposed to any sort of ban, instead supporting a more risk based approach.

IATA has called for greater government engagement with shippers to help control the problems.

Late last year, the ICAO Dangerous Goods Panel recommended that lithium batteries should have a state of charge of 30% or less, when carried in shipments on commercial aircraft. The regulation still has to be ratified.

A full ban on the carriage of lithium batteries had been discussed by the group, but it was decided this would penalise compliant shippers and not address the broader compliance issues around the transport of the devices.

Lithium batteries are now heavily regulated as airfreight shipments because of the risk from “thermal runaway” when a single overheated unit can propagate heat transfer to the next cell in the box and so cause a fire to spread throughout an entire bulk load of batteries.
A UPS B747 freighter crashed after departing Dubai in September 2010, killing the two crew, and the cause was linked to a consignment of lithium batteries, which have also been associated with two other aircraft accidents.