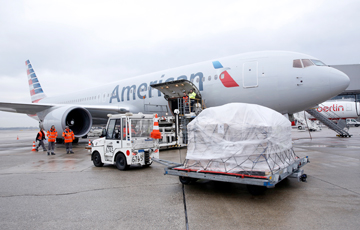 US passenger airlines long since exited the main-deck market, but the new American Airlines Cargo expects to move 500,000 tonnes of cargo and mail per year, generate $800 million in revenue, following its merger with US Airways.
Cargo became the first division to achieve full integration on 20 October, when “the system switched over” and the merged carriers moved to a single air waybill, says Joe Reedy, vice-president cargo sales and marketing for AA.
“There was very little overlap from a cargo standpoint, and we’ve seen growth in the combined organisation,” Reedy says. “Philadelphia [a major hub for the former US Airways] is close to New York, but they’re two different markets. To and from Europe, US Airways brought quite a few new destinations in Europe such as Munich, which we were serving by truck, and Tel Aviv is now online for us.
“Legacy US never connected to Latin America, but for us it’s our crown jewel. We’re connecting Latin America with Asia through the US better than ever through Miami, Los Angeles and New York.
”American has launched new Dallas-Shanghai and Dallas-Hong Kong routes, and will shortly introduce a daily service from Miami, plus three per week from JFK, to Viracopos (Sao Paulo).
“There are positive signals in the market,” Reedy says. “Perishables are very strong, the automotive sector has been strong for some time now and consumer electronics has picked up. There are great opportunities for us in pharma both into the US, originating here and travelling through. The arrow is definitely pointing up.”
For more stories on the US, please look out for our latest issue of Air Cargo News