October gets fourth quarter off to a strong start, says IATA 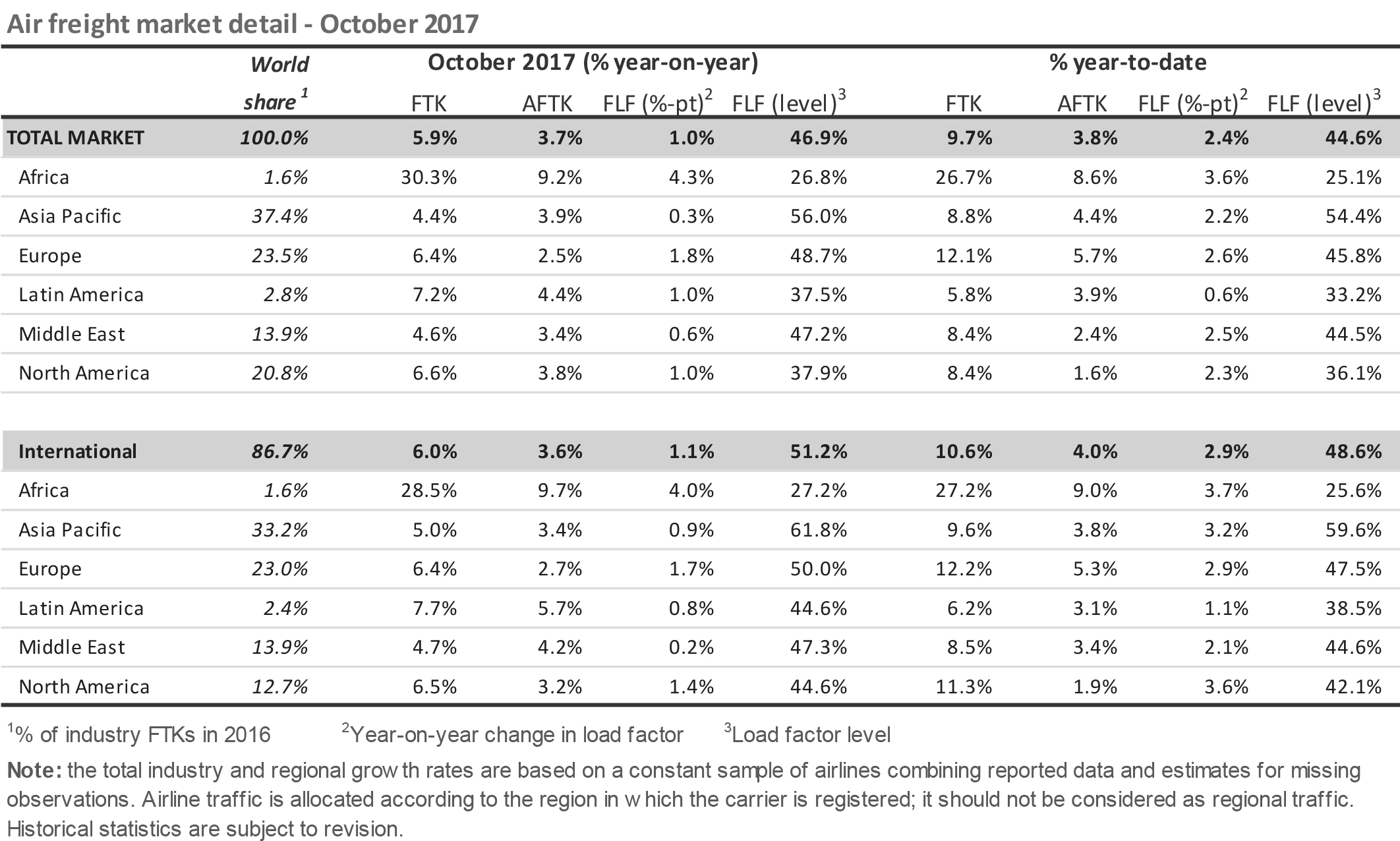 The fourth quarter of 2017 has got off to a strong start, with global air freight demand (in freight tonne-kilometres) up 5.9%, said IATA in its latest figures.
While this was a slowdown from the 9.2% year-on-year growth in September 2017, it was comfortably ahead of the average annual growth rate of 3.2% over the past decade.
Freight capacity, measured in available freight tonne kilometers (AFTKs), rose only 3.7% year-on-year in October, making it the 15th consecutive month where demand growth outstripped capacity – all positive for load factors, yields and financial performance, said IATA.
However, while cargo demand remains strong, several indicators suggest that the growth peak may have passed. US inventory-to-sales ratio is tracking sideways, indicating an end to the rapid inventory restocking period that often gives air cargo a boost. Also, the new export orders component of the global Purchasing Managers’ Index is stable while the upward trend in seasonally-adjusted freight volumes has moderated.
IATA still expects freight volumes to grow in 2018, although at a slower pace than in 2017.
IATA director general and chief executive, Alexandre de Juniac, remained resolutely upbeat. “Demand for air freight grew by 5.9% in October. Tightening supply conditions in the fourth quarter should see the air cargo industry deliver its strongest operational and financial performance since the post-global financial crisis rebound in 2010," he said.
Airlines in all regions reported an increase in total year-on-year demand in October, though international freight growth slowed in all regions except Africa.
Airlines in Asia-Pacific (the most important world market, at 37.4%) saw freight volume increase by 4.4% while capacity expanded by 3.9% in October, compared to the same period last year. Demand is now around 3% higher than in the post-financial crisis rebound in 2010, IATA pointed out. The region’s manufacturers continue to enjoy buoyant order books with major exporters in China and Japan reporting growing backlogs supported in part by stronger economic activity in Europe.
In Europe (the next biggest market, at 23.5%) carriers posted a 6.4% increase in freight demand in October – a marked slowdown from the 10.6% growth in September, though still above the 9.0% five year average, while capacity increased by only 2.5%. Concerns that the recent strengthening of the Euro might have affected exporters have not yet materialised, in IATA’s opinion, and manufacturers’ export orders are growing at their fastest in more than seven years.
Freight demand remains very healthy on Europe’s transatlantic routes and is strong on routes to and from Asia, boosted by China’s economic stimulus measures.
In North America (20.8% of the world market) carriers posted a 6.6% increase in freight volumes for October which, while slower than September’s 7.4%, was still ahead of the five-year average rate of growth. Capacity increased 3.8%.
IATA says that the strength of the US economy and dollar has boosted inbound freight in recent years; US Census Bureau data shows an 11.6% year-on-year increase in air imports in the first nine months of 2017, compared to a slower rise in export orders of 6.5%.
Read more air cargo data and statistics news
In the Middle East (13.9% of the world market) carriers’ year-on-year freight volumes increased 4.6% in October and capacity increased 3.4%, though international freight volumes slowed to 4.7% from 9.2% the previous month. The recent volatility in year-on-year international growth is due to developments in demand in 2016 rather than a marked change in the current traffic trend, IATA argues. In fact, seasonally-adjusted international freight volumes have continued to trend upwards at 8-10% over the past six months, it says.
Turning to the smaller markets, in Latin America (2.8% of the world total) airlines enjoyed demand growth of 7.2% in October and a capacity increase of 4.4% compared to the same period in 2016. International freight volumes rose by 7.7% over the same period, nearly nine times the five-year average rate of 0.9%. The pick-up in demand reflects signs of recovery in Brazil, the region’s largest economy, concludes IATA. Seasonally-adjusted international freight volume is now back to that seen at the end of 2014.
In Africa (1.6% of the world total), carriers posted the largest year-on-year increase in demand of all regions in October, with freight volumes rising 30.3% but capacity by a relatively modest 9.2%. International freight volumes meanwhile grew by 28.5%, over three times the five-year average of 9.4%. Demand has been boosted by very strong growth to and from Asia, up by more than 67% in the first nine months of the year.