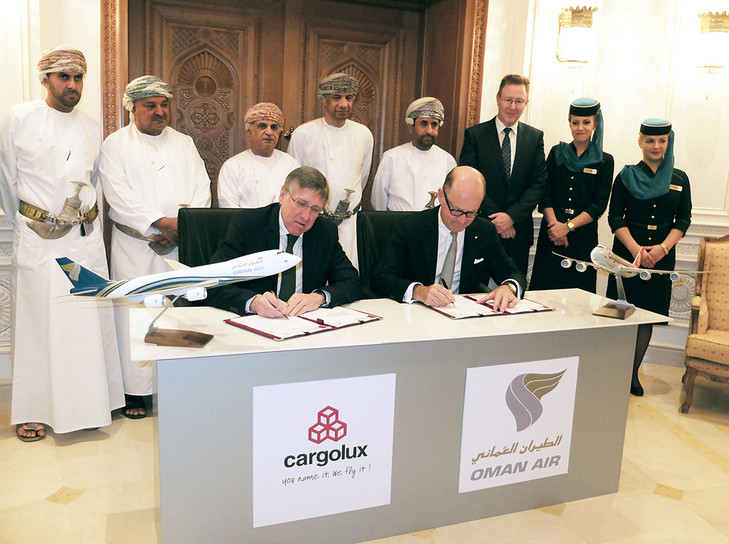 Oman Air and Cargolux have added an extra frequency to their freighter partnership between Oman and India, and say they plan to add further destinations to the tie-up in the future.
The two airlines announced this morning that they would today add a second weekly flight between Chennai and Muscat.
Cargolux said the deal would give them increased access to India, where it wishes to continue to expand services, while Oman Air said the deal would increase volumes at its Muscat logistics hub.
Cargolux Airlines executive vice president sales and marketing Niek van der Weide said it is in the process of adding further services to its India offering.
“The importance and value of the cooperation and partnership with Oman Air which made the reintroduction of cargo services to India possible and, effective August 11, we will go to two weekly flights ex Chennai,” he said.
“India will be a very important market for Cargolux in the future and we will look at further expansion soon with planned addition of Mumbai as a second destination.”
Oman Air chief sales officer Mafoodh Al Harthy added: “We are pleased to announce that Oman Air and Cargolux will now operate two full freighter flights from Chennai to Muscat.
“The new service will enable us to strengthen our presence within the Indian market by accessing the industrial belts of South India.
“Vitally, however, they will also give an important boost to the development of the Sultanate of Oman as a global cargo hub.
“Our new services will generate increased cargo traffic that will not only attract important revenue streams, but will also demonstrate to the global market the outstanding, modern cargo infrastructure that Oman offers.”
The two airlines said they hoped to build on the success of the newly-launched services by expanding its airfreight services from Oman to destinations in China, Europe, Africa and the US.
The agreement signifies Oman Air’s latest step in expanding its cargo operations. It follows the Omani national carrier’s launch of pan-Gulf Cooperation Council and pan-European trucking services, and a joint cargo service with express giant DHL between Oman and Dubai.
The initial agreement, signed in April, provided Cargolux with access to the Middle East airline’s facilities in Muscat, Salalah and Sohar.
In addition, Oman Air agreed to provide Cargolux with access to the freight capacity of its passenger fleet, which flies to 11 destinations in India and three in Pakistan, as well as to destinations in Nepal, Bangladesh and Sri Lanka.
This gave the Luxembourg–based carrier the opportunity to feed consolidated freight to Oman from a number of larger markets.