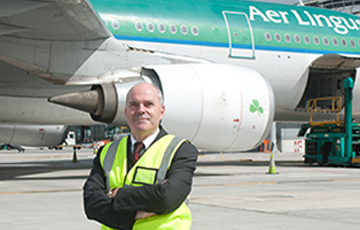 Michael Sanfey – Interim head of cargo, Aer Lingus
There is the continued expansion of Middle Eastern airlines, offering both threats and opportunities to smaller Europe-based carriers. At the same time European and US carriers continue to expand their route schedules.
‘As Europe and the world economies look optimistically to a period of stability and growth, the key challenge remains, as ever, securing the services of the right people to drive through the changes needed to remain at the centre of world trade.
‘The uptick in the last 12 months has led to some severe shortages of personnel talent in key areas, such as in support of external (industry-led) and internal initiatives to introduce eAWBs and the new EU GDP guidelines, for example.
‘The ongoing need for analysis and revenue management has led to some shortages of personnel. For example, we have been trying to fill a vacancy covering this area for a least a year now.