The November monthly statistics from European air cargo carriers paint a bleak picture for the end of the year as demand declines, the Paris attacks and strike action affected European airlines cargo operations.
IAG, Air France KLM, Lufthansa and Finnair all recorded year-on-year demand declines in November, with the German group recording the largest slippage.
The Lufthansa group of companies reported a 12% year-on-year decline in traffic during November to 853m revenue cargo tonne km.
This is the largest decline experienced by the carrier so far this year, although results were affected by strike action.
It is also the lowest level for November cargo traffic recorded by the airline since Air Cargo News records began in 2011 and the seventh month in a row of declines.
Lufthansa said its services during the month were “significantly impacted by seven actual and three announced, but eventually not executed, days of strikes at Lufthansa Passenger Airlines”.
“Freight capacities at Lufthansa Cargo decreased significantly (down 6.3%), foremost because of cancelled belly capacities,” it added.
As a result, the airline suffered a drop in its cargo load factor, which slid to 69.3% from 74.6% a year earlier.
This is the lowest its November load factor has been since 2011. 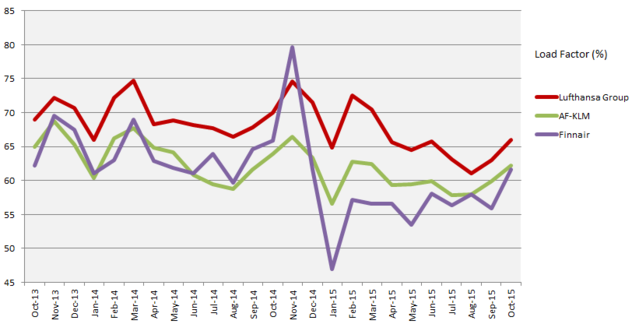 The difficult market conditions have also been taking their toll on Lufthansa Cargo’s financial performance as it has reported two quarters in a row of operating losses, although these results were also affected by the decision to cancel the development of a new Frankfurt freight hub.
But management does now appear to be stepping in to turn the situation around.
A report in German newspaper Handelsblatt suggests Lufthansa Cargo will look to cut administrative staff numbers and various processes will be reviewed as part of a cost cutting drive, named C-40, which aims so save €40m.
It will also reduce its freighter capacity with the retirement of two MD-11Fs.
Finnair also had a tough month as capacity additions outstripped demand declines. Two new freighter flights shared with IAG between Helsinki and London kicked in from mid-September and the Finnish airline adjusted its passenger routes for the winter season.
Frequencies were increased, for example to Miami, Bangkok and Delhi, while Phuket, Krabi and several Southern European destinations were opened for the winter season.
Its new A350 aircraft operated for the first three weeks of November primarily in Europe, until shifting to the Shanghai route on November 21.
As a result, its cargo supply increased by 13.8% year on year to 109m available tonne km.
Meanwhile, demand declined by 5.6% year on year during November – its lowest level for the month since Air Cargo News records began – and its load factor declined to 65.8% from 79.6% last year.
Air France KLM also had it tough in November. The French airline group saw demand decline by 11.3% year on year in November to 762m revenue tonne km.
Like Lufthansa, there were outside reasons for the decline as its cargo activity was affected by additional security measures implemented at Paris-CDG airport following the November 13 Paris terrorist attacks.
The financial cost of the Paris attacks is estimated by the airline to have reached €50m, although it said current booking trends are in line with a "progressive recovery including a limited impact on volumes after the end of December 2015".
Its results were also affected by a 33% reduction in freighter capacity against last November and a 9.7% fall in overall cargo capacity.
It added that cargo unit revenue per available ton km was still down on the year-ago level even when currency and Paris attack effects are stripped out.
Load factors slipped to 65.2%, the lowest level for the month for at least five years, from 66.4% a year ago.
The IAG group of airlines, which includes British Airways and Iberia, saw demand drop by 2% compared with last year to 482m cargo tonne km.
This is the lowest level of November demand recorded over the last five years. 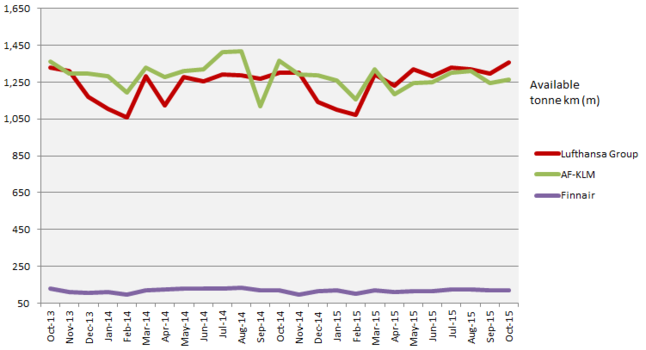