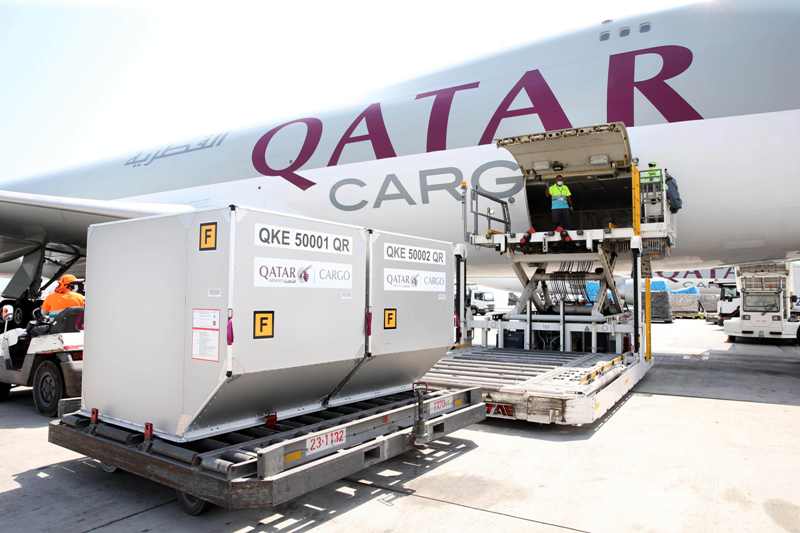 Qatar Airways Cargo will replace its entire fleet of ULDs with Safran Cabin’s new Fire Resistant Containers (FRC) as it aims to take a lead in countering the risk posed by lithium battery shipments.

The move stems from the airline’s vested interest in preventing safety issues related to the increasing risk posed by the batteries.

Guillaume Halleux, chief officer cargo at Qatar Airways, said: “As a leading cargo airline, we put the safety of our passengers and employees first.

“Due to the increased transport of devices with lithium-ion batteries in ULDs, we were looking for a solution that prevents incidents in containers used for the handling and storage of baggage, as well as the transportation of cargo goods.

“Thorough testing has validated the absolute fire resistance of Safran Cabin’s new FRC containers, and we are very pleased to roll out this solution in our belly-hold fleet within such a short period of time.”

Qatar Airways is also the first cargo carrier to adopt Safran Cabin’s new FRC solution, having taken delivery of the initial batch of containers on September 29.

At the recent IATA World Cargo Symposium, Halleux made an impassioned plea for regulators to take steps to counter the threat of rouge lithium-ion battery shipments.

Halleux said the airline had suffered three near misses with rogue battery shipments in recent years.

The common denominator in each of these incidents was the mis-declaration of goods, making it hard for any supply chain players to pick up on the risk.

He added that industry-wide there has been four incidents in the last 15 years that have resulted in hull loss and in some of these instances the loss of life.

There have also been 322 air/airport incidents registered from 2006 to May 2021 involving lithium-ion battery cargo of which 18 were in 2020.

Safran Cabin has extended its portfolio with a Class-D Fire Resistant Containers, complementing its existing solutions against Class-A fires (ordinary combustibles, such as paper and cardboard).

Safran Cabin’s newly developed Fire Resistant Containers are designed to resist a lithium-based fire for 6 hours, and are equipped with doors made of high impact resistant materials and without the use of Velcro.

Pascal Piveteau, executive vice president cargo & catering, Safran Cabin stated: “We are delighted to bring this innovation to the market together with Qatar Airways Cargo as one of our key partners for pallets and container solutions for more than 15 years.

“The project started at the end of 2019, and was finished in record time to support Qatar Airways Cargo’s replacement plans. Together, we are contributing to the setup of new standards for a safer aviation environment.

“We are also honoured by the trust our esteemed customer has expressed in this major project, which constitutes one of the largest-ever airline ULD fleet replacements, especially in these challenging times.”