Regulators and demanding customers force the pace on e-freight 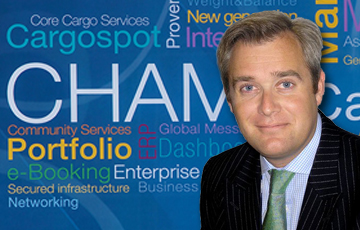 Modal shift is occurring in part because of the air cargo industry’s snail-paced adoption of e-freight and reluctance to share data. Airlines and forwarders are looking after their own interests when they should be “protecting air freight as a mode,” according to James Fernandez, VP global commercial operations at technology provider Champ Cargosystems.
“The transparency is there, but we see too much in-fighting. Sea, road and rail are eating our lunch,” Fernandez claims.
Technology providers have the responsibility of convincing a margin-constrained industry, and one that is “not IT literate”, that data on shipment integrity and security is going to become an essential part of its business.
“There was a reluctance to acknowledge this initially, and it was difficult to make the business case, to small and medium firms especially, for investing during the recession,” Fernandez comments.
He argues it’s only now the regulators are saying “You won’t fly unless you provide this information” that the business case has shifted. And when companies commit, they find that other benefits flow from it.
Champ’s purchase of Traxon in 2011 gave it some penetration into the forwarding community. “But SMEs have still felt excluded, and are continuing to fill in and fax paper documents,” Fernandez says. “They didn’t feel they had a solution at a price of tens of dollars a month that avoided what is essentially an ‘electronic typing’ process.”
Last week Champ moved further to plug this gap with the acquisition of Logitude, a supplier of shipment management software for small and medium forwarders. The company had attracted around 50 customers during its incubation phase and its system integrates seamlessly into Champ’s existing platforms. Fernandez claims the expanded group is providing the “e-glue” that connects the entire air cargo community.
SMEs “don’t have legions of people”, but nevertheless need greater freight visibility to meet the increasing demands of their customers, comments Steve Hill, principal industry consultant for Champ.
“If you’re a pharmaceutical shipper, you’re not looking at six or seven basic milestones any more. You may be getting 40 alerts on the status of your shipment via automated devices.”
Suppliers have to match or exceed this enhanced level of visibility, Hill adds. “The last thing you want is to be notified by your customer that there was an excursion and you’ve broken several terms of your agreement, because then you’ve got nothing to argue back with.”