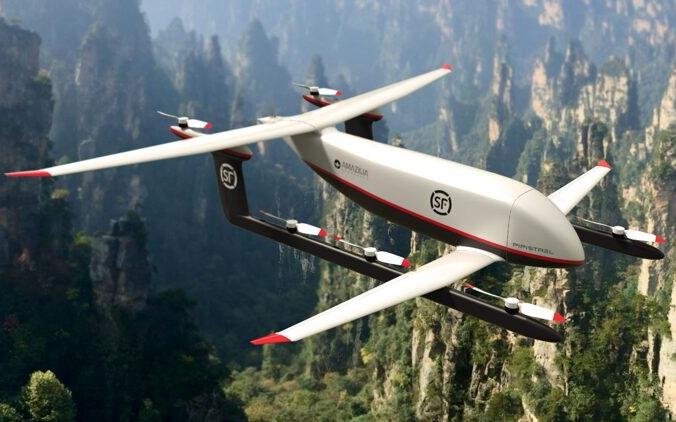 Chinese express firm SF Express expects that in the next 10 years it will have a fleet of more than 1,000 large vertical take off cargo drones (UAVs) to meet remote delivery requirements.

Slovenian aerospace firm Pipistrel yesterday revealed that it would provide UAVs to be used alongside a digital flight control and vehicle management system from Amazila, a Munich based subsidiary of SF Express.

SF Express said that it is expecting to need a large fleet of the drones in order to reach remote locations more easily.

“SF Express intends to adopt cargo VTOL drones to solve this bottleneck due to their flexibility and high speed, which is on par with helicopters, and has low costs which are competitive with truck delivery.

“The high-altitude capability allows us to extend our civil air cargo service coverage to even difficult to reach mountainous areas. We believe VTOL drones will become a major vehicle in China, and SF Express alone will need more than 1,000 in the next 10 years.”

The aircraft prototype is scheduled to undergo flight testing with the Amazilia Aerospace system in Europe followed by operational validation in China starting in 2022.

SF Express intends to deploy the cargo drone fleet in their domestic and non-domestic business operations by 2023.

The aircraft will be equipped with eight vertical-lift packages each consisting of a Pipistrel E-811 EASA Type certified powered rotor.

Pipistrel founder and chief executive Ivo Boscarol said: “To be chosen by one of the largest logistics companies globally to design and produce a tailor-made line of vehicles for aerial cargo transportation is a solid recognition of Pipistrel’s capability built up on more than a decade of achievements in electric flight.

“We look forward to becoming even more involved in strategic business solutions on a global scale, where our vehicles will change how aerial logistics work and have further significant impacts to sustainability and quality of life.”

Last week, UPS announced that it would order 150 electric vertical take off cargo aircraft as it also tackled the issue of reaching remote destinations.