Airfreight demand growth began to ease off in April, resulting in a “sharp” decline in load factors as they reached their lowest level for a year.
The latest IATA figures show that airfreight volumes increase by 3.3% year-on-year in April compared with growth of 4.3% for the first four months.
It said that the slowdown was mainly the result of a weakening in demand in Asia Pacific, where freight tonne km (FTK) increased by 4.5% in April against the year-to-date figure of 7.3%.
“The slowdown is consistent with a reversal in earlier gains in regional trade,” IATA said, adding: “Part of the recent decline in emerging Asia exports is reflecting economic weakness in Europe, which dampens demand for manufactured goods shipped by Asia Pacific carriers.”
One contact at a European logistics firm confirmed this assumption earlier today, saying the weaker Euro was having an effect on consumers’ buying power.
Conversely, exports from Europe were increasing as goods manufactured on the continent became cheaper elsewhere.
“Results have been mixed,” IATA added. “Carriers in the Middle East continue to show strong growth, with a rise of 14.1% in April year-on-year, reflecting continued expansion in capacity and network, as well as robust trade with Middle Eastern economies.
“In Europe, by contrast, airfreight volumes carried by regional airlines fell 0.3% in April year-on-year.
“Recent improvements in business confidence in the Eurozone are yet to translate to increased demand for airfreight and consumer confidence remains subdued.”
As a result of the growth slowdown and capacity increases, the association said load factors “dipped sharply in April” to 44.7%.
In March, the figure stood at 47.9% while in April last year, load factors stood at 45.4%.
“Levels are now the lowest they have been for the past year, on a seasonally adjusted basis. All regions except Africa recorded an increase in capacity in April compared to March.”
The region with the weakest load factor in April was Africa, at 30.9%, while Asia Pacific was the best preforming with 53.2%.
IATA was not confident of a major improvement in the year ahead, although it still expects there to be growth in 2015.
“Acceleration in the airfreight growth trend is unlikely in the near term. Globally, April data show no increase in business confidence compared to the start of the year.
“Furthermore, export orders have shown gradual decline throughout the first quarter, and are now indicating no growth.
“That said, for 2015 overall, moderate expansion in air freight is expected alongside anticipated improvements in the global economy.” 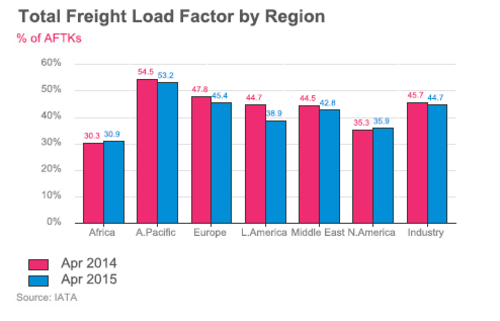 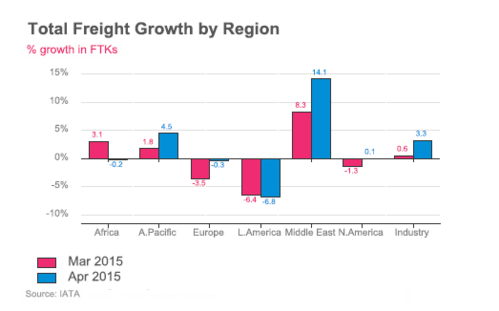